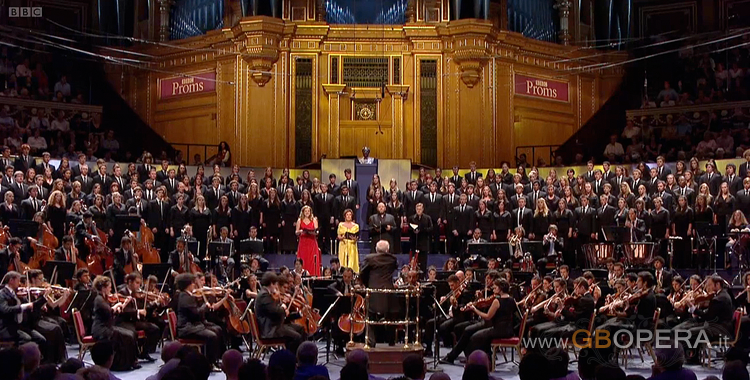 Londra, Royal Albert Hall, BBC Proms 2012
Daniel Barenboim dirige Beethoven
Ludwig van Beethoven: Sinfonia nr.9 in re minore op.125 “Corale”
National Youth Choir of Great Britain
West-Eastern Divan Orchestra
Direttore Daniel Barenboim
Maestro del Coro Rober Isaacs
Soprano Anna Samuil soprano
Mezzosoprano Waltraud Meier
Tenore Michael König
Basso René Pape
Londra, 27 luglio 2012
Friday, July 27th, 2012 marked the conclusion of the Beethoven Symphony cycle at Proms. Across town a grand spectacle of a different kind was just about to begin: the opening ceremony of the 2012 Summer Olympics. The concert hall was packed to the brim; tickets were sold out months in advance. Beethoven’s Ninth was still as popular as ever and what better way to celebrate the brotherhood of mankind and the unity of the nations than with the timeless “Ode to Joy.”
Royal Albert Hall has always been notorious for its terrible acoustics and on this evening, the venue was no less forgiving toward Barenboim and company. The first movement started out a bit flaccid, though it could be because the cavernous hall dissipated all the energy from the vibrato of the strings. There were also some tempi problems in the Allegro and the strings were sloppy on more than one occasion. Overall the playing was lackluster and uninspiring. Since the music failed to consume my attention, my mind drifted off to Gustav Klimt’s Beethoven Frieze in the Vienna Secession. The evening’s motif of unification of men and nations naturally got me thinking about the unification of the arts, which is the governing idea behind the Gesamtkunstwerk. The frieze, depicting Richard Wagner’s interpretation of the Ninth, was the only work of visual art that has ever moved me to tears. It portrays the journey of the Ninth perfectly, from darkness to light, from suffering to joy, from alienation and despair to unity, love and salvation. Mirroring the Symphony’s four movements, the frieze also has four distinct sections. It begins with the floating genii representing humanity’s longing and moves through various personifications of the forces of darkness as well as the many aspects of the human condition, finally culminating in a glorious embrace.

The Finale was initially disappointing though, again, this could be on account of the terrible acoustics. The basses failed to present a robust argument; the sound just did not pack a punch. Moreover, there was a lack of contrast between the woodwinds vs. the basses/cellos in their recitative-like dialogue where various themes are  introduced by the former then promptly interrupted and refuted by the latter. But then the “Ode to Joy” theme was introduced by the basses and cellos in the faintest, most delicate pianissimo; so faint you could detect a pin drop, and yet the energy was palpable. That moment was magical and for sixty seconds, everyone in the audience stopped breathing.
While the orchestral music was never quite able to fully blossom in the hall and fill the space, renowned bass René Pape’s Olympian voice penetrated through the air like a thunderbolt, instantly commanding the attention of thousands with his mighty entrance: “O Freunde, nicht diese Töne!”. He sang with august authority, flawless diction, and conviction. And when he was not singing, Pape would nod and bob his head up and down to the rhythm of the music. He was the only one out of all four soloist singers who seemed to be really enjoying himself. German-Canadian tenor, Michael König, who stepped in for Peter Seiffert, did not produce the volume one would expect from someone his size. His sound lacked the steely brilliance and the heroic quality that the piece calls for. Russian soprano Anna Samuil was unpleasantly shrill and her top notes sounded forced. What I found terribly amusing was that her demeanor would have had everyone believing that she was the star of the show. During the curtain calls, Samuil strutted on and off the stage with the absurdity of an attention seeker who seemed far too pleased with herself for how poorly she sang. One can only imagine how she would behave were she actually an adequate singer. Perhaps a hop, skip, and a few cartwheels? The mezzo-soprano part is a thankless role in this piece, and Waltraud Meier showed up (which was all that really mattered). The members of the National Youth Choir were frequently not in unison and scattered the German consonant endings like schrapnel: “Welt-t-t-t-t”.
The man of the evening was, without a doubt, the maestro Daniel Barenboim himself. Not only did Barenboim become the first conductor since Henry Wood in 1942 to conduct a complete Beethoven Symphony cycle at the Proms, but following the performance he would carry the Olympic flag alongside seven other humanitarians at the opening ceremony. His contribution: for bringing “harmony in the place of discord”; clearly a reference to not only his musical influence but also his founding of the West-Eastern Divan Orchestra consisting of musicians from Israel, the Palestinian territories, and Arab countries to promote mutual understanding between conflicting nations through music.