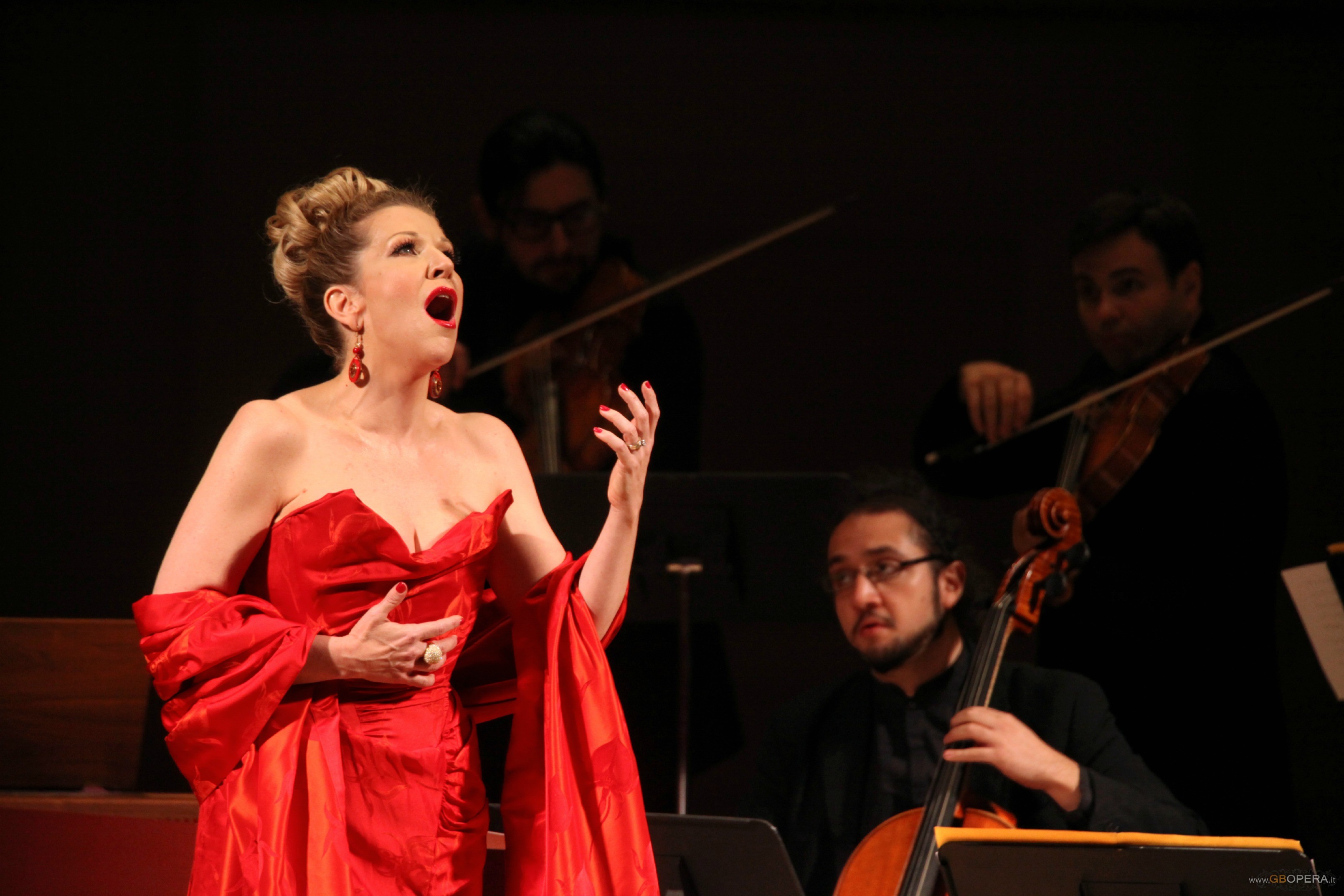 New York, Carnegie Hall.
Il Complesso Barocco
Dmitry Sinkovsky, Director and Violin
Joyce Di Donato, mezzo
Antonio Cesti: “Intorno all’idol mio” from Orontea; Domenico Scarlatti: Sinfonía from Tolomeo et Alessandro; Claudio Monteverdi: “Disprezzata regina” from L‘incoronazione di Poppea;  Geminiano Giacomelli: “Sposa son disprezzata” from Merope Antonio Vivaldi: Concerto in D Minor for Violin, Strings, and Continuo, RV 242;  Giuseppe Maria Orlandini: “Da torbida procella” from Berenice;  Johann Adolph Hasse: “Morte, col fiero aspetto” from Antonio e Cleopatra; George Friederic Handel: “Piangerò la sorté mia” from Giulio Cesare,  Passacaglia, Act II from Radamisto;  Giovanni Porta: “Madre diletta” from Ifigenia in Aulide Domenico Scarlatti: Sinfonía in C Major;  George Friederic Handel: “Brilla nell’alma un non inteso ancor” from Alessandro Encores: Keiser: “Lasciami piangere” from Fredegunda; Giuseppe Maria Orlandini:“Col versar barbaro il sangue” from Berenice George Friederic Handel:“Brilla nell’alma un non inteso ancor” from Alessandro.
New York, 18 November 2012
Having followed the career of mezzo-soprano Joyce Di Donato almost from the moment she left the young artist program of Houston Grand Opera, and having heard her on stages from San Francisco to Barcelona, from New York to Paris, in repertory boldly spanning Baroque and bel canto, Richard Strauss and Jake Heggie, this writer never suspected that she lacked anything in confidence. And yet the artist who strode onstage at Carnegie Hall on 18 November exuded a kind of regal authority new to her, accentuated by upswept hair (something like a crown) and a glamorous, almost fantastical Vivienne Westwood gown.
Her program focused on “Drama Queens” (also the title of her new album, Virgin Classics 5 099960 265425, highly recommended), a teasing title for a serious, thoughtful examination of royalty in extreme situations, ranging from Ottavia of Monteverdi’s L’Incoronazione di Poppea to Cleopatra, as construed by both Händel and Hasse. More than has been typical of DiDonato on the concert stage, she acted each aria, limning gestures of exceptional grace and power, fully investing herself in the characters — aptly enough in a program that stresses the drama of the queens.
Di Donato has been developing this program for two years, working closely with Il Complesso Barocco, with whom she has enjoyed a long and fruitful collaboration. Beginning with “Intorno all’idol mio” from Cesti’s Orontea, she presented an array of contrasting moods and vocal colors, making extensive use of her upper register, which strays into soprano territory. This variety of expression sets her apart from certain of her contemporaries, who prefer to focus entirely on pyrotechnics or entirely on laments: Di Donato gave us plenty of both, maintaining our interest and excitement in part because we weren’t certain what would come next.
Her technical skill includes all manner of rapid-fire coloratura, trills and melismas, as well as an assured messa di voce, which she deployed a couple of times, and an astutely judged white tone to convey weakness and despair. Beyond this, however, she delves deeply into the text, never losing the value of the words and delivering psychological insights of unexpected depth. Hers is the extraordinary ability to make an aria by Handel the rival of a soliloquy by Shakespeare, and when given a number with the intrinsic emotional range of Ottavia’s “Disprezzata regina,” she is at her finest, languorous one moment, spitting with rage the next.  Although some arias on the program are familiar to New York audiences, few are associated with DiDonato. The exceptions are “Sposa son disprezzata,” handed down to us in Vivaldi’s Bajazet but here credited to its author, Geminiano Giacomelli, who wrote it for his opera Merope; the other exception was her final encore, the da capo section of Alcina’s “Ma quando tornerai” (from Handel’s eponymous opera, which she has recorded with Il Complesso Barocco). Other works performed here are unfamiliar to almost everybody. These include “Madre diletta, abbraciami,” from Giovanni Porta’s Ifigenia in Aulide; and two arias from Giuseppe Maria Orlandini’s Berenice, discovered only recently, uncatalogued, in an archive in California. Both are sensational, bravura displays of passion, and they seem destined to join the concert repertory of other singers — provided any can be found who are capable of the virtuosity required.  With Dmitry Sinkovsky leading on violin, Il Complesso Barocco offered several instrumental interludes — during some of which Di Donato remained seated onstage like a monarch serenaded by court musicians. (The men of the ensemble wore red socks to match her gown.) Sinkovsky proved especially dazzling in Vivaldi’s Concerto in D Minor for Violin, Strings, and Continuo (RV 242). He moved with combustible speed and accuracy through the most outrageously difficult passages.
The Westwood gown, ingeniously designed with mix-and-match skirt, detachable sleeves, a shawl, a hoop skirt, and apron panels that can be formed into a bustle, added immeasurably to the scenic effect Di Donato created. It also nearly caused her to trip, a further inducement to remain onstage during the final instrumental selection, Domenico Scarlatti’s Sinfonia in C Major. With typical unpretentiousness, she announced from the stage that, for her encores, she would dispense with the usual exits and reentrances: “It’s well-established that I can wear the dress,” she said. “Walking is another story.”
As the afternoon continued, the audience’s enthusiasm grew. Individual arias earned isolated standing ovations, and by the end, all of Carnegie Hall leapt to its feet and cheered — both the classic “Brava” and the all-American “whoop.” The sense was general that an important artist was operating on a new level, and that something historic was happening. As a friend observed, it’s a matter of time before music-lovers begin to lie and claim that they, too, attended the performance. Foto © Steve J.Sherman