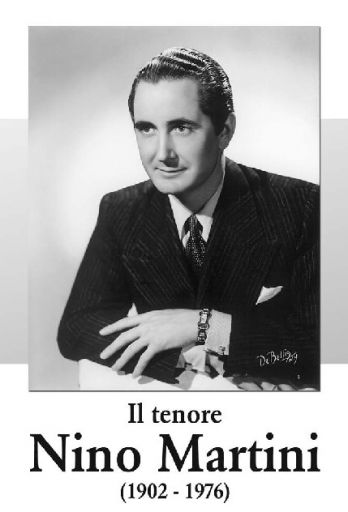 Nino Martini was born in Verona on 7 August 1902 to Beniamino and Alessandra Tauber , in the area of the ancient convent of the Capuchins friars of which part of the closter only remains with the legendary tomb of Juliet,the immortal heroine of Shakespeare’s “Romeo and Juliet”. He was the second of four children (Rosetta, Nino,Wanda, Iolanda); his maternal grandfather, Venceslao Tauber, came to Verona from his native Bohemia in 1845 as a military member of the Austrian Imperial Government. His father was a civil guard, custodian of the tomb of Juliet and also of the “Campo Fiera Cavalli”, a large stable constructed in the gardens of the old convent of the Cappuccini, where every six months one of the largest European horse fairs was held.
The years of his childood and youth were like those of most youngsters around the world. In school he did not excel or so much interest like many other students (he often “skipped” school and his father had to chase him around the neghiborhood were he enjoyed roaming with his friends). In 1913 his father died and his mother who was an excellent seamstress (she had clients even in Wien at that time capital of the Austro-Hungarian Empire) had to provide for her four children. She also replaced her husband as custodian of Giulietta’s tomb.During the First World War (1915-1918), he spent much of his time in the stables of the horse fair, developing a passion for horses and becoming an excellent rider. In Verona,near the current Piazza Cittadella, there was a “Patronato alle Stimate” were many boys and girls would meet and pass the time participating in the various activities organized by the Stimatini priests. Among these activities there was the theatre where youngsters with artistic interest performed.There was also the sports arena where lively soccer tournaments were held with rival teams and Martini and his sisters often acted in it. Martini became a good soccer player in the “Patronato” team. It was in this setting with which he kept in touch until the last years of his life,that he was noted for his prompt intelligence and for his passion for singing: Father Valerio Tommasi who later became a missionary in China and who until his death maintained in affectionate epistolary relationship with Martini, had him sing a soloist at religious functions. One day Father Tommasi told him “you will became a good singer” and he guessed right: for Nino the Reverend was like a father.In 1917 Martini sang every Sunday at the 11:00 Mass in the church of San Fermo in Verona: the congregation was costantly growing as more and more people came to hear the young boy with the clear,robust and beautiful voice singing religious motifs by Schubert and Gounod. In truth almost none of his relatives and friends had faith in his musical talent aside from his mother and Father Tommasi.

In 1920 he was presented to the veronese soprano Lucia Crestani who had him sing some opera romance;and without many words told him he would remain in trial for one year and upon saying good-bye added “you will succeed”. He studied with Crestani for three years until on 27 and 28 March 1925 when he appeared for the first time in public at the “Teatro Filarmonico” in Verona

participating with success in two concerts commemorating the 25th anniversary of the death of Giuseppe Verdi (with arie from Aida, Trovatore, Forza del destino ,Luisa Miller) at the side of Lucia Crestani : Always at the “Teatro Filarmonico” on 3 May 1925 he partecipated in a charity concert (with songs from Otello, Gioconda,Aida,Nerone) at the side of Lucia Crestani and on 2 April 1927 in a concert commemorating the 7th Franciscan centenary. On 8 June 1927 he partecipated in the commemoration of the centenary of Beethoven’s death (1827) with a concert at the royal liceo ginnasio Scipione Maffei of Verona (recital and arie from Fidelio).His official debut took place at the Teatro Sociale of Treviglio (near Bergamo) on 8 and 9 October 1927 with “Rigoletto” at the side of Carla Stuardi and Alfredo Tomasini: for this perfo

rmance Martini did not receive any payment from the impresario.Subsequently he was engaged for the opera “I Puritani” whose range,from the time of first presentation with the great tenor Rubini,was never complied with by other tenors The distinct and surprising quality of Martini’s voice that allowed him to reach the highest notes of the tenor scale with ease and level volume, allowed him to sing the opera in the original tone in which it was written,reaching in the sovracuti rare notes of admirable effects: he was able to sing the aria “Credeasi misera” with F sovracuto, not at falsetto.The opera was presented at the Teatro Lirico Sperimentale of Milan on 31 March and on 1st April, at the “Politeama Milanese” on 25 and 26h April 1928: with Martini sang the soprano Ida Cavalli and the baritone Ildebrando Santafè (naturally he again received no payment from the impresario).(First part)