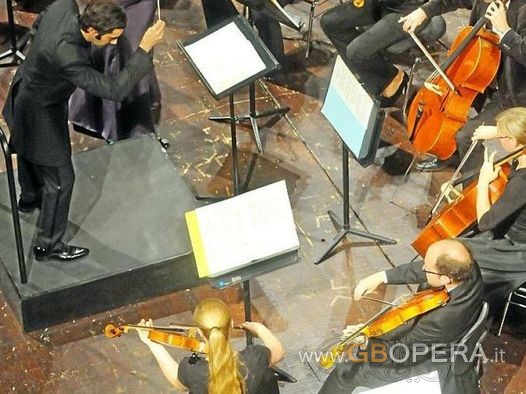 A  refined and sophisticated choice of programme was proposed by the Junge Deutsche Philarmonie in their concert at the Teatro Filarmonico in Verona on 26th September for the concert series of the Accademia Filarmonica.  An orchestra,  made up of students selected from a truly wide range of German music academies, poised on the brink of their performing career.  They come together periodically to rehearse and prepare a programme that are then taken on tour.  Their spirit is dynamic and enthusiastic, their attitude is enterprising, and their mission is to give a formative professional preparation to its members and to promote both the German and European musical tradition. The choice of programme reflected all of this and more.  It also demonstrated their desire to widen their cultural horizons and deepen their musical maturity in terms of repertoire and associations. The theme was distance(distant-lontano-fern) and the repertoire was taken from amongst the masterpieces of the cross-roads of 20th century post-romanticism and modernism.  A beautifully linked choice including Strauss’ last work, written in 1948 at the end of a long and fruitful career, the sublime Vier Letze Lieder,  the Concerto for Orchestra, one of  Bartok’s last(1942-43) and most successful works, (Bartok who had met Strauss in 1902 and whose early work was greatly influenced by him), and Lontano composed by Ligeti, Bartok’s heir, in 1967.
The wide range of atmospheric effects demanded in the first work on the programme, Lontano by Ligeti, gave the players the opportunity to demonstrate their technical and musical rigour.  The work, written for a big orchestra, marked Ligeti’s break with a past, impregnated with folklore. The character of Lontano is chromatic. He doesn’t use scale or serial systems. The writing is dense and the instruments are treated as soloists.  Harmonic agglomerations are formed from the overlapping melodic lines created by the slow chromatic movements. Nevertheless, melodic fragments of just a few notes are recognizable and are utilized in the creation of a dense weave of harmonic texture. The variable internal, rhythmic subdivision means that a regular beat is not perceived, resulting in a complete independence between tempi and rhythm.  The young musicians rendered this ornate and elaborate score with skill, and with coordinated and  homogeneous sectional playing, capable of creating an effective atmospheric impact in the fluctuating expansion and recession of intricate sound masses.
The orchestra, although still unripe in overall profundity, gave an accomplished performance of the immensely moving and well-loved Vier Letzte Lieder. The young conductor, David Afkham, while clear in his musical intentions and directions, has yet to find the breadth of phrase and depth of  interpretation required for this work; a work suffused with tender retrospection for a long, fulfilling and satisfying existence. The perspective of a backward glance to all that was dear to Strauss at the end of his life: of his life, loves and thoughts: the consoling value of faithful love, the serene contemplation of death,  the voices of nature with its bird songs, the  tribute to his father with the beautiful and  prominent role of the horns, the female voice,  and the magnificent ending  of the 6 note self-quote of the transfiguration theme from his first successful tone-poem Death and Transfiguration. He captures the rustling of spring, the melancholy of autumn, sunset, night, the presage of death in a metaphor of life and the human condition. The soprano, Christiane Oelze, did not appear particularly suited to this repertoire. She had difficulty supporting the long, soaring vocal line, often swooping up to notes, the phrasing was chopped up, the lower register was faint, and opening notes were often attacked rather than emitted. And swaying and twisting was not a good substitute for an authoritative vocal and stage presence.
Like Strauss’ work, Bartok’s Concerto for Orchestra was also written at the end of his life in exile.  From the perspective of the distant America he too brings in elements and quotes from reminiscences of his past life and work,  the nostalgia of the Rumanian/Hungarian Volkmusic, asymmetric rhythms, ostinati, exhilarating gypsy-like accelerandi, fugues, a revisitation of baroque concerti grossi, as well as contemporary citations(his ironic treatment of the theme from Shoshtakovitch’s 7h Symphony and Franz Lehar’s “Da geh ich  zu Maxim).  Just as Bartok wrote the concerto as a homage to the virtuosi orchestral players of the Boston Symphony, so it proved the perfect vehicle to a wonderful overview of the instrumental and musical capacities of all sections of this orchestra. They demonstrated a secure and expressive technical preparation, precision and awareness of the contrasts and nuances within the overall structure.  This work highlighted their strongest qualities and their energetic and committed performance allowed each section and instrument to shine, especially in the final superimposed whirling perpetuum mobile fugue, fanfare and fireworks. Not even the most enthusiastic applause could elicit an encore! Photo Brenzoni