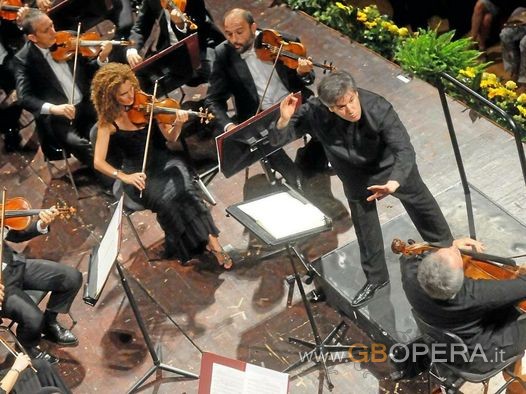 There was an air of great expectation and excitement for the 5th concert of the September concert series which featured the refulgent Santa Cecilia Orchestra conducted by their musical director, Antonio Pappano, with Mario Brunello as soloist in a well consolidated programme.  The programme, including the encores, was the repeat performance of the previous evening’s closing concert of the MiTo Festival at the Arcimboldi Theatre in Milan, and the Dvořák,  was also a repeat of a performance in last year’s Roman season.  The choice of such a well-known and much loved programme gave the orchestra and Pappano the opportunity to measure themselves in a repertoire often at risk of being played by force of habit.
The opening bars of the cello concerto announced that this was not to be so.  The orchestra immediately set the tone  from the first notes.  The orchestral introduction riveted the audience’s attention by the tautness of its dramatic tension and the musical and technical command of all its components which provided the soloist with a perfect context to launch into the concerto.
The  quality of the individual orchestral members, the uniformity of style and presence, the compactness and cohesiveness of each section and their energy never wavered throughout the concert. The breadth and sweep of Pappano’s all-embracing and communicative gesture, always found them  ready to react to a myriad of  dynamic and expressive nuances, radiating grandeur in  the orchestral interventions. The orchestra was never relegated to mere accompaniment , but even in the predominant cello solo parts, maintained their presence through intense and clearly articulated pianissimo playing, with every instrumental entry sharply characterized and woven together by Pappano’s magistral guidance.  Brunello’s performance particularly highlighted the lyrical and rhapsodic elements of the concerto.  His moments of musical abandon, brought back into line in the thrust of the virtuoso passages, alternated with the touching and poignant moments of the  intimate and reflective passages, in all three movements.  His tasteful and discreet use of glissando contributed to a smooth and expressive legato line  throughout, further enriched by rarefied pianissimi and a  gossamer ending to the Adagio.  Eloquent playing by the concertmaster in the duet in the third movement between the second solo voice of the violin and the cello soloist, with its interplay of contrasting high and low voices, without forgetting  to mention similar moments of sensitive ensemble playing between flute and cello in the first movement and clarinet and cello in the second.  In response to enthusiastic applause, Brunello delighted the audience with two encores for solo cello, the Prelude from the first Bach Suite and a relaxed and relaxing blues.
In the second half of the programme, Pappano plunged into Beethoven’s 5th with his usual energy and intensity, propelling it forward with determination. In the  first three movements he consistently maintained rather stringent tempi, which, while it preserved the performance from any risk of becoming heavy or laborious, didn’t allow the necessary breathing space to savour the richness of the  individual  musical elements within the overall shape.  The triumphant and exhilarating last movement, rang out in any case in noble  splendour under the expansive leadership of Pappano.
After thunderous and sustained applause, the audience was rewarded with the most exquisite musical moments of the evening. The prelude from La Traviata was insuperable, beginning and ending in an imperceptible pianissimo, with crafted, elegant phrasing throughout, sensitive but resounding pizzicato from the lower strings, soaring violin and cello lines in the alternating ‘amami Alfredo’ theme, delicate embroidery of the violins at the end.  A benchmark performance.  The same can be said of the second encore, the pas de six, from Guillaume Tell by Rossini. The levity and grace conferred on the ballet music by  the slight lift in the middle of the first four bar theme, the clarity  of the articulation in the more rhythmical and technical sections,  the perfect balance, the lustrous refinement of the  successive solos of individual instruments giving each player a last opportunity to display their instrumental and musical excellence before taking their leave, rendered this a cameo performance. Photo Brenzoni