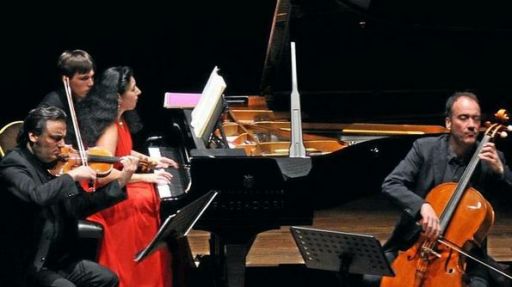 The concert by the DaMiNi piano trio, for the Amici della Musica Society in Verona, after the initial Beethoven Trio in E flat major, was dedicated to the two important 19th century Bohemian composers, Smetana e Dvořák. It was an interesting opportunity not only to enjoy the works for their intrinsic value, but also for eventual traits that could in some way associate the fact that Smetana is considered one of the first great 19th century ‘nationalist’ composer, and Dvořák his follower.
The concert opened with the Beethoven Trio op1, n°1, a fresh and and graceful work, which gave the trio scope to demonstrate their technical ease and tonal transparency. In particular, Milana Cheryavska, displayed a firm and sparkling touch which proved to be the propulsive core. Her rippling scales, crisp and even repeated notes, singing legato, and finely tuned dynamics never rose above the other two instruments. Her tender accompaniment, onto which the other two instruments posed their interventions, was rich in feather-light trills and curvaceous phrasing which gave shape and continuity to the second movement. The rhythmic and harmonic surprises which enliven the luminous second movement were gently highlighted. In the vivacious dialogue between the instruments in the trio she was again incisive in the three note plus acciacatura motive, and the rapid, exhilarating, darting fluidity of the finale galop, with its gay leaps of tenths in the piano,was also greatly beholden to her mix of brilliance and command.
After the Beethoven, with its compositional neatness and transparency, the Smetana Trio was an abrupt contrast, a deluge of emotion and outpouring of grief. A work which can’t be divided from its genesis. It was written in a tragic moment of the composer’s life; the death of his beloved daughter. The first movement, after an intense and rhapsodic violin solo on the G string, repeated with profound feeling on both the cello and violin, alternates moments of vehemence and turbulence in its sweep of dramatic, visceral melodies. At times heroic and at others despairing, in unison or in canon, with single violin notes evoking painful pangs, or tremolos as strong as breast beating, it also abandons itself to poignant and serene folk melodies which heighten the perception of sudden surges of emotion and irrepressible grief. Again a powerful performance of the pianist maintained an exceptional musical and emotional tension. The release in the elegiac second movement, seemed to release the emotional tension too, which showed up here and there with some intonation and rhythmic uncertainties in the strings. However the trio managed to convey a sense of introspection and quiet mourning in the fleeting more serene episodes of this deeply personal work.
The Dumky Trio contains its intended programme in its title. It signifies an epic ballad, or more specifically a song or lament of captive peoples. Divided into six sections, it is free from the usual rigour of classical form and can pass from brooding to light-hearted themes without having to comply to structural constraints. Abrupt changes in rhythm and mood between the different styles of slav folk music, from the exuberant and effervescent to the lamenting and soulful, with slow rhythmic motives spinning into dizzying accelerandi. Wistful and melancholy in the beautiful slow long string lines of dialogue, finishing with the energetic contrapuntal, it gave the performers the opportunity to indulge in all manner of expression. Clemens Weigel, came into his own and his solos were particularly luscious and singing, while the duetting phrases with the violinist, David Früwirth, were touchingly poignant. The trio spun to the end with dashing momentum, and was rewarded with an enthusiastic reception from the audience. Photo Brenzoni