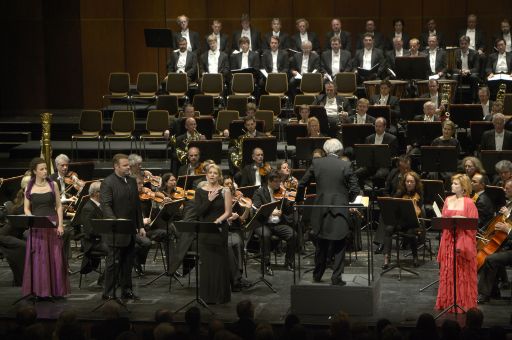 From the musical point of view, “Maria Stuarda” is one of Gaetano Donizetti’s most brilliant operas. The libretto is based on Friedrich Schiller’s play by the same name and reduces the drama to the love affair of the two queens with the Earl of Leicester for the sake of a real belcanto gem. The Deutsche Oper Berlin presented it on two concert nights continuing a nice and long tradition of non-scenic performances of operas whose staging would either be too much of an effort or problematic in terms of the Regietheater which is widely accepted in Germany. The opera-goer can fully concentrate on the music instead. The orchestra of the Deutsche Oper Berlin masterly conducted by Paolo Arrivabeni starts the evening zestfully and he keeps all musicians together during the performance in the best tradition of conducting. He seems to be breathing with the singers slowing down or speeding up the musical tempo (preghiera). The short introduction leads up to Elisabetta’s first big scene. Carmen Giannattasio has a cool “mezzosoprano” that perfectly fits the majestic and at the same time power-obsessed English queen. It sounds more of a soprano and consequently contrasts Joyce DiDonato’s exquisite and warm timbre. Giannattasio’s vocal line is impeccable and she adds some extra notes during the evening. It is a pity that she remains the only singer who tries to be spontaneous and performs ad libitum at least a little. While Joyce DiDonato wears a plain but elegant black evening dress during all the concert, Carmen Giannattasio changes the colour of her dresses in every act, certainly to make a point who the real queen is. Joseph Calleja is a favourite of the Berlin opera audience. After his scene with Talbot at the beginning he announces that he had some allergic reaction. Despite that his Roberto, Earl of Leicester is sung pretty well but lacks what would make it outstanding. Compared to the singer’s other appearances in Berlin such as Nadir in Les pecheurs de perles a couple of years ago, he remained unspectacular despite his attractive vocal timbre. On the other hand, I admit that is is not quite easy for a tenor to be a musical match between two primadonnas.
Marco Mimica is apowerful rather than belcanto-like Talbot with his big bass-baritone. The young Italian Davide Luciano uses his warm and round baritone adequately for the role of Sir Cecil. The probable reason why the Deutsche Oper chose Maria Stuarda for concert performances may have been the US-American Joyce DiDonato who is starring in the title role. The singer is undoubtedly one of the world’s leading vocalists at the moment and excels in Rossini roles as far as belcanto repertory is concerned. It is amazing how she develops wonderful lyrical phrases, offers sublime coloraturas and trills, and turns the emotional inside out vocally. But she misses out on dramatic attacks or even acuti. All seems calculated to ensure a success. Her entrance aria O nube already causes frenetic applause from the audience that seems to virtually stick to her producing one beautiful note after the other. Like that the evening almost turns into a one woman show due to the motto: she came, sang, and won. For me something was missing that belongs to belcanto as well: truthfulness. There was not the least spontaneity in the singing and not even the duet with Leicester culminated in a top note. There was no final cadenza during all evening. Nevertheless the famous preghiera (prayer) of the last act was exquisitely sung and she showed a wonderful fiato and legato. The chorus of the Deutsche Oper (master William Spaulding) assisted here and in the other few chorus scenes on the usual high level that caused extra acclaim at the end. I admit as a lyrical mezzo-soprano, Joyce DiDonato must have a vocal approach to the role that is different from Dame Joan Sutherland’s or Edita Gruberova’s but even the Stuarda of mezzo legend Dame Janet Baker at the English National Opera in the 1970s was more charysmatic and down to earth. It is a pity that we do not have an idea how the great Maria Malibran with her vocal range of three octaves sang the role originally in 1835 in spite of indisposition. Photo Bettina Stöß © Deutsche Oper Berlin