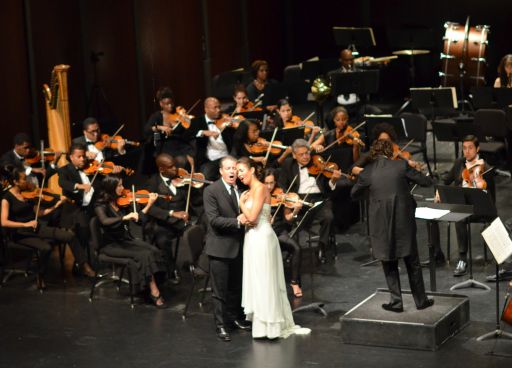 The ninth season of the Napa Valley Festival del Sole ended with a bang. Appropriately named “Bella Italia!”, the closing weekend commenced on Saturday with an evening dedicated to Sophia Loren. Her son, maestro Carlo Ponti, conducted the world premiere of Daniel Brewbaker’s Sinfonietta per Sofia (“for Love and Laughter”), a piece of music written in celebration of the Italian screen siren. The event made headlines with Hollywood celebrities Robert Redford, Francis Ford Coppola, and Whoopie Goldberg in attendance. However, the highlight of my weekend was the opera gala festival finale that took place on the following afternoon. It was some of the best singing I’ve heard in a while.
Despite the unforgiving acoustics of Lincoln Theater, soprano Nadine Sierra and tenor Matthew Polenzani gave a spectacular performance of Italian and French arias. Both were so relaxed and comfortable in their own skin you’d think they could sing this program in their sleep.
Polenzani opened with the extremely challenging “Pourquoi me réveiller,” an aria that leaves the singer completely exposed and vulnerable. But the only vulnerability you hear is that of his character who sings of heartbreak and despair. Polenzani blew us away with excellent vocal technique (those A#s were solid) and his pained portrayal of the sorrows of young Werther is every bit as convincing as Goethe’s own words. The tenor’s formidable “O sole mio” was in no way inferior to Pavarotti’s. He presented the two stanzas with contrasting dynamics and a touch of that bright Italianate ping we know as the squillo.
Sierra’s first solo, a rapturous “Depuis le jour” was delivered with such ease she makes those high notes seem like a walk in the park when really the girl just has exceptional breath control and can paint beautiful lines with her voice. Similarly her “Je veux vivre” was exhilarating. Animated and youthful, Sierra really got into character and made us all believe she was, at that very moment, a teenage girl experiencing love for the first time. Here again she manipulates those high notes effortlessly, whether it’s crescendos or diminuendos, Sierra executes flawlessly and makes it look easy.  As a duo, the two singers demonstrate what opera should be. Strip away the costumes, the props, the sets, and the oftentimes ridiculously incongruous stage directions and we have on stage two singers who have mastered their craft and who also happen to be two very competent actors. What Sierra and Polenzani were able to create in the intimacy of that small space, without bells and whistles, easily surpasses any grand production centered around spectacle rather than artistry. Their duet “Parigi o cara” was filled with so much pathos it left me in tears (and it takes a lot to make this reviewer weep). Wrapping up the set as Mimì and Rodolfo (end of Act I of La Bohème) the pair walked off stage arm in arm leaving the audience with a sustained high C on the final “Amor!” that was just delicious perfection.
Under the baton of Ponti, the Sphinx Symphony, an all Black and Latino orchestra, sounded lustrous. The Rossini overture was energetic and comical with some very witty exchanges by the woodwinds. It was such a pleasure to watch the musicians having fun with smiles on their faces, bobbing their heads, and enjoying themselves while they play – the energy undoubtedly got passed along through the music to the audience. Ponti made sure the orchestra supported the singers well, pulling back when necessary and never overwhelming them.
After much applause and a well-deserved standing ovation, Sierra and Polenzani graciously returned for an encore. Prepared with wine glasses and a bottle of local vino in hand, the duo gave a toast with a vibrant and playful “Libiamo” from Verdi’s La Traviata. Ponti then dedicated one more encore, the silly and jovial Neapolitan classic Funiculí, Funiculá, to his mother who was in the audience. The crowd cheered and I had a good giggle. Photo Paul E.Richardson