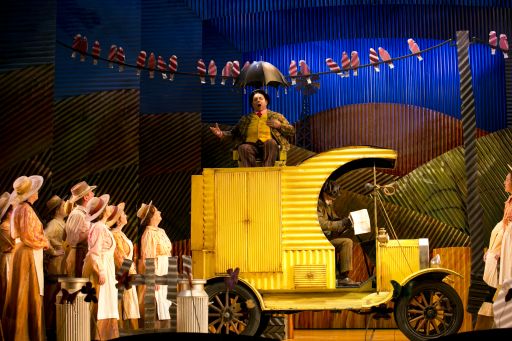 The last opera of the present Sydney opera season is Donizetti’s opera buffa, ‘L’Elisir d’amore’, a sentimental comedy set in provincial northern Italy in the early 1800s, taken from an earlier play by Auber set in early nineteenth century Basque country.  The iconic, humorous, Australian verse novel ‘The Songs of a Sentimental Bloke’ by C J Dennis came to mind last night during the opening night performance of Donizetti’s comic opera for more than one reason. In his admitted intention to bring the comedy as close to his audience’s experience as the scenario will allow, the director Simon Phillips, has set this clever production in the rural Australia of 1915. The typical Australian aesthetics of corrugated iron is incorporated by designer Michael Scott-Mitchell into the crinkle-cut sets and props. The lighting by Nick Schlieper evokes the warm glow of the Australian landscape and every hue of its deep blue sky whether by day or night. The costumes by Gabriela Tylesova lend an unsophisticated charm to the proceedings. The presence of soldiers and recruit of soldiers, the naivety of the isolated country folk and above all, surtitles in that unique vernacular known as Strine,  (Australian, for the uninitiated) all create a particular rural Australian ambience, familiar to the audience. The surtitles are hilarious, and often colourful and bawdy, especially when compared to their sedate Italian original, and the associated use of poetic licence taken by Phillips had the audience in paroxysms of laughter. They matched the visuals perfectly, generally keeping apace with the comic drive of Donizetti’s sentimental comedy. Momentary breaks between numbers allowed for bleating, neighing, crowing and screeching from respectively, crinkle-cut sheep, horses, chooks, and galahs (on the iconic Australian telegraph pole). All great fun, with the added merit of providing a sense of inclusiveness to the local audience, so vital to its real comic success, and which, it must be admitted, aroused a sensation of nostalgic tenderness in this expatriate reviewer. Many of the gags and gimmicks were deftly inserted: Adina’s off-hand Aussie salute (the constant brushing away of ever present bush-flies from the face) as she reads, the Akubras and the sheep-shearing, as well as pinches of wily social comment. The scene of the town gossips takes place in the chook(hen)-house. The sergeant is English but the troops are Aussies. The difficulty in the production, however, seemed to be the passage from the heartier and more theatrical moments to those of pathos. The often unexpected changes in dramatically and musically important moments were regularly submerged by the lingering guffaws of the previous entertaining surtitle, making it impossible to catch the sudden change of mood. It became obvious during the performance, that the audience was following the opera via the surtitles rather than the actual musical, dramatic moment, which gave the impression of an audience out of synch with the opera. This, of course, is the challenge of the production; to explore the possibility of a stronger identification of the opera to the audience, without losing its inherent musical and dramatic character.
Jane Ede, as Adina, was all the more commendable for the ease and perfect sense of timing with which she slipped into the richly choreographed staging, in a last minute substitution for the indisposed Rachelle Durkin. Her interpretation was secure and commanding as the capricious protagonist. Her voice vibrant and ringing, especially in the higher register though a more clearly defined diction would have contributed to a greater variety of colour and expression. The tenor, Aldo Di Toro, was an endearing Nemorino although in his great lyrical moments, including ‘Una furtiva lagrima’ the voice remained identical to that of the more light-hearted episodes. Samuel Dundas’ interpretation was convincing as the swaggering obnoxious Belcore but at times the voice lost focus detracting from a firm vocal presence. Conal Coad was a likeable villain as the barker Dulcamara. Nimble in his patter song, his diction overall enabled him to etch a strong characterization. Catherine Wiles was engaging in the role of Giannetta. As in the other operas of this season the Australian Opera Chorus did not disappoint. Their stagecraft is excellent, their vocal quality clear, firm, round and homogeneous and their musicianship attentive and tailored. From the opening chord, the orchestra, under the baton of Guillaume Tourniaire, played delightfully, delicately catching the mood and colour at every turn and underscoring the vocal line and musical citations with empathy. The conductor led them with great spirit and refinement, setting a joyous, energetic pace in the buffo moments, and creating a rarefied air of tenderness in the lyrical ones. It was evident from the rousing applause of the audience at the end, that this opera after 13 years is still a beloved favourite. Photo Lisa Tomasetti