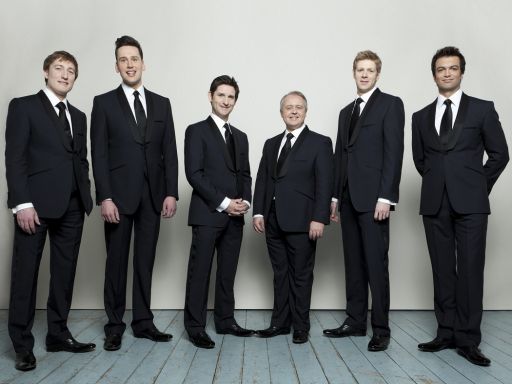 The Veronese Amici della Musica Society’s choice to invite the renowned a cappella vocal sextet, The King’s Singers, was rewarded with a sold-out auditorium and a strong, out of town, presence in the audience. As the ensemble appeared on stage, they were greeted with the sort of enthusiastic applause usually reserved for an end of concert reception. And their performance, the epitome of style, elegance, taste, versatility and technical excellence, certainly didn’t delude their public. The programme ranged from 16th century Italian madrigals, through 19th century German lieder, 20th century contemporary classical, to arrangements of traditional airs and American modern classics. Every moment of the concert betrayed their meticulous training and preparation, erudite background, profound musicianship, impeccable vocal technique, consummate stage-craft and irresistible charm. Composed but never rigid, polished but never slick, they exuded enjoyment. The performance was enlivened with neat and tasteful sight and sound gags, from a raised eye-brow to a harmonic or melodic highlight given intentional but never exaggerated prominence, leading the listener down their designated path. Each work was presented, too, with a winning mix of wit and refinement, in cultivated Italian by a member of the group.
This preparation proved particularly enlightening in the clever and playful Nonsense by Goffredo Petrassi. The entertaining nonsense poems by Edward Lear, (himself a composer who had set to music some of his own poems) to which Petrassi wrote the music, were first recited in English. Petrassi’s scoring, using an excellent Italian translation, captured and characterized to perfection the essence of Lear and his work. The group faced the technically challenging score with ease and their uninvasive and inventive staging of the surreal pieces endowed the work with an even stronger connection to a clearly delighted audience.
The breadth of their mastery was evident in the first half of the concert. They moved effortlessly from the Italian Renaissance to German romanticism and back to Italian modernism. Whether in Italian or German, the diction of every word was perfectly enounced, clear, comprehensible, and audible even in pianissimo in the back row of the hall. Flawless intonation, infallible rhythm, pure and focussed tone production, absolute synchronization, free and flowing phrasing, attentive nuances, expressive, timbric harmonic accompaniments in perfect balance, blended to produce a paragon of excellence.
The polyphony of the celebrative madrigals, I Trionfi di Dori, was a tapestry of colourful threads, in an ebb and flow of beautifully articulated but amalgamated lines, astonishing in their instrumental effect. With a complete change of register, the fresh and joyful, the sweet and wistful character of the Mendelssohn lieder were tenderly treated: the accompanying parts a precious feature of their representation.
The second half of the programme was devoted to a more popular choice of repertoire, divided into two song groups, Postcards from Around the World, and The Great American Songbook. Of the Postcards, the first three were arrangements of traditional Newfoundland, Welsh and Scottish folk songs, and the fourth the modern Italian classic Volare. This last piece was the least successful contribution of the evening, not due to any failing on the part of the sextet, but rather a misjudgement of what the Italian public expects or concedes in the treatment of such an iconic piece.
The superb arrangements of the Coleman and Leigh, Hamilton, Trenet and Lawrence, Young and Heyman, Rodgers and Hart and Cole Porter classics, were delivered with panache and distiction. Again the rhythmic accompaniment was extraordinary, especially in the bosanovas.  A prolonged standing ovation was rewarded with four more American songs in a build up of enthusiasm and a surge of applause. However, though done with wit and humour, it seemed rather a lapse of style before their last encore, to have such a distinguished ensemble ‘plug’ their CD’s on sale in the foyer after the performance.