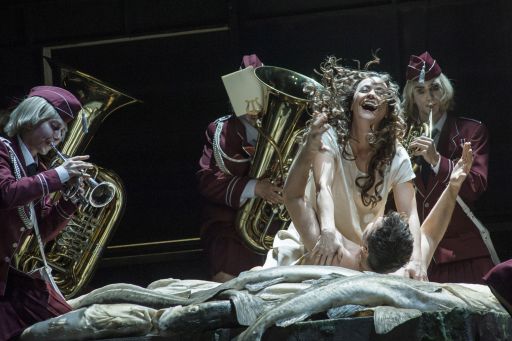 Ole Anders Tandberg’s new production of Dmitri Shostakovich’s Lady Macbeth of the Mtsensk District at the Deutsche Oper Berlin is a co-production with Den Norske Opera & Ballett, Oslo where it was premièred last September. It is the first new production in the Deutsche Oper building after some reconstruction and has turned out most successful. At the end of the opening night there was frenetic and unanimous applause not only for the performers, chorus and orchestra but also the production team, which is not quite common for the critical Berlin audience long used to this kind of Musiktheater. Katerina Izmailova, the heroine of the opera is in fact a prototype character by Anton Chekhov. She is the victim of a class society that condemns rich wives to inactivity and passivity and if murder is what she has in common with Shakespeare’s Lady Macbeth, Shostakovich succeeds in making the audience understand Katerina. His score has lurid colours and rough sarcasm but also flashes of empathy. It contains tonal anarchy as well as pure romanticism. Staged for the first time in 1934, the opera caught on for two years until Stalin saw it. He detested it for its vulgarity even though lovers as well as money and alcohol tend to disappoint in this opera, which should rather have pleased him. Shostakovich’s revision of the opera in the 1960s did not make it popular in the West but the fact that the world-famous cellist and conductor Mstislav Rostropovich expelled from the Soviet Union in 1976 recorded the opera for EMI with his wife Galina Vishnevskaya in the title-role in 1978. Ole Anders Tandberg’s production is all about fish. As he transfers the horror story from the Russian steppe to a remote Norwegian fishing village, it is cod instead of corn that the Izmailovs make good money out of. So fish is omnipresent on stage in slimy pieces almost as big as children. They are used (or rather abused?) for fighting, raping, masturbating or even killing. Boris, Katerina’s father-in-law and head of the family always shows up with a big cod in each hand. When the workmen are sexually harassing the cook Aksinya fish becomes a phallic symbol. The two lovers having strangled Katerina’s husband Zinoviy, Sergei finishes off with him with a big-sized cod instead of the traditional candlestick. The uniform stage by Erlend Birkeland is dominated by a heap of slick black rocks with the contrasting white eternit-clad house of the Izmailovs on top of it. It is the only illuminated place on the generally dark stage (light by Ellen Ruge) making it an isolated spot of civilization. The house is dismantled step by step during the performance so that only its foundation is left in the last act. Maria Geber’s costumes underline the idea of everyday hard work in the fishing business with rubber dungarees and boots. Only Katerina is privileged enough to wear a fashionable and colourful padded jacket at the beginning. Apart from the tragic nature of the story – Katerina commits murder three times throughout the opera after all – Shostakovich’s masterpiece is full of grim humour and satirical elements. Tandberg seems to especially concentrate on them. Policemen in underwear are ironing their uniform trousers in the scene at the police station – here the irons become phallic symbols – while their boss is singing an aria about law and order. The producer carries the sheer grotesque aspects of the score so far that he makes a marching band of school-girls in skirts and stockings played by men appear for the extra brass passages accompanying every time when it comes to sex or murder. As clever and comprehensible Tandberg’s approach may appear, there is a decisive break in the final act. Although everything looks miserable and dirty and the convicts are marching in underwear watched by a real dog, offenders in Norway are never sent to hard labour camps. Katerina’s tragedy seems to be multiplied to a dimension that lots of Russian people – guilty or not guilty – used to be sent to Sibiria. In that respect the end of the opera left a deeply moving feeling. Donald Runnicles, General music director of the opera house, follows Tandberg’s suit with expressionistic sounds from the pit of the Orchester der Deutschen Oper. There are lurid moments of high precision in Shostakovich’s march parodies with hammering percussion and a crashing gong. The orchestra including the brass band on stage did their level-best to play in a weird, jazz-like and malicious way but the general sound remained a little glossed-over. The evening turned out triumphant for Evelyn Herlitzius in the title role. She is an excellent actress and makes Katerina appear young, almost innocent, gradually making for her tragic end. Vocally she has it all for the title role and fulfills all expectations. She sounds a little like a reincarnation of Dame Gwyneth Jones, manages most dramatic as well as lyrical passages excellently and never runs out of power or leaves the musical line. In view of her performance it is hard for the young Russian tenor Maxim Aksenov to be a match for her as the libido-driven Sergei even though he is most idiomatic and impresses with a few powerful tones. Bass legend Sir John Tomlinson as Boris Izmailov is as convincing as he was once as Godfather Wotan. All the other roles were sung on the usual high level of the Deutsche Oper. Dana Beth Miller as Sonyetka and Stephen Bronk as Old Convict especially stood out. The Chor der Deutschen Oper supported by male singers of the Extrachor der Deutschen Oper Berlin formed a first class vocal unity. Photo Marcus Lieberenz