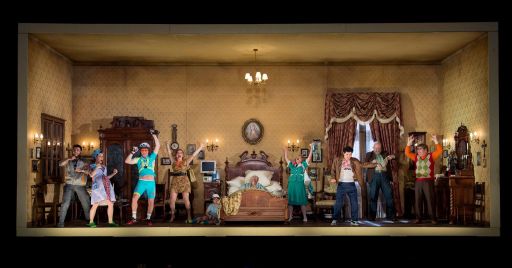 The Komische Oper Berlin continues breaking with its long tradition to play opera in German only by staging two one act operas of the international 20th century repertory that seem to have little in common apart from the fact that both were world-premièred in 1918, a year that went down in human history. Gianni Schicchi by Giacomo Puccini is the comic contribution to his Il trittico that has not really caught on as a trilogy even though the first night at the Metroplitan Opera nearly 100 years ago turned out successful. It took seven years until Béla Bartòk only opera “A kékszakállú herceg vára” was staged in Budapest for the first time. Béla Balázs wrote the libretto which is almost considered national literature in Hungary. As a work of symbolism and ambiguity it is mentally highly demanding. Producer Calixto Bieito gives the unusual pairing a final touch by playing one opera after the other without an intermission. Like that the break between the funny and the deeply philosophical part of the production could not be more evident. Rebecca Ringst designed a uniform stage and Bluebeard lies down in Buoso Donati’s big bed at the beginning of the second part. According to the sold programme Bieito is aware of the black humour of Puccini’s opera, a plot of cheated cheaters as to legacy-hunting but there is much more in it than Bieito shows. Whoever cannot do without a brutally pubertal rather than black or more ambiguous humour has bought the right ticket like the lady next to me whose constant giggling and laughing nearly seemed a part of the production. She was audibly having a good time with the actors in “modernized” plebeian costumes by Ingo Krügler who behave like people with say problematic social backgrounds. The tenor is putting everything into his scooping out the bed pan of the just deceased Buoso and whoever can shake his sides laughing about the sound of the many farting cushions and finds mentally disabled family members (Betto Di Signa) as amusing as pulled-down undies (Gherardo, Lauretta) is getting his money’s worth. As a matter of fact, Puccini’s finely sketched structure of a well-to-do family of the Medici era with the charm of a Commedia dell’Arte farce does not only fall by the wayside but is turned into absurdity by Italian clichés such as pizza deliveries, macho latinos with golden chains, sun-glasses and grabbing their crotches. Like that Bieito does not really prove a director of comedies and the audience have to wait for a painfully long hour until something at least musically noteworthy starts. Bieito can cope with Bartòk’s soul drama a lot better even though he pushes Bluebeard and Judith into the sexual pathological corner a bit too much. They may be in a sadomasochistic relationship but that falls short of the complex and most symbolistic structure of the work. First of all Bluebeard and Judith are in love with each other and they do not fight all the time, at least not from the very beginning. Again the programme sold reveals more truth than Bieito is able to stage by citing the Belgian writer and dramatist Maurice Maeterlinck: “As soon as we really have something to say to each other, we will have to keep silent.” As brilliant as Rebecca Ringst’s idea is to dismantle Buoso’s cramped room to reveal backstage but whatever it is, it looks like ruins or at least a neglected living room where the couple has a booze. The expressionistic score that contains detailed descriptions of each door Judith opens in Bluebeard’s castle or even better his soul is not illustrated appropriately: torture chamber, armoury and treasure chamber. The garden turns out to be a modern wall of urinals where Judith slams Bluebeard against the mirror and smears blood from the urinals all over him and the place. The climax of the score – the fifth door opening on Bluebeard’s land in radiant C major – is the Founder period facade of a once splendid mansion that is just the start of the end, in this case Judith’ death in Bluebeard’s lap. The overwhelming success of the second part is mostly due to the personalities of the two singers: Gidon Saks and Ausrine Stundyte. The bass-baritone convinces with his powerful and not quite black voice that is present all the time. He crowns the finale with the compelling narration about his former wives represented by morning, noon and evening. The Lithuanian soprano sings with big emotional commitment and vibrato sounding existentialistic and party endangered despite her impeccable top C on the opening of the fifth door. It was chief conductor Henrik Nánási who in fact suggested to stage both one act operas together. Musically it is like Italian verismo meets Hungarian impressionism. It is quite clear that the Bluebeard score is closer to the Hungarian conductor and he evokes impressionistic tones, atmosphere and suppleness with the Orchester der Komischen Oper. He indulges in merciless orchestra tutti with brass and organ and yet I have heard Bartòk’s score much more thrilling and differentiated by Ferencsik and Solti. Altogether it is a highly complex piece of work. Puccini’s Gianni Schicchi does not seem to be Nánási’s cup of tea. He puts the notes together in a more or less accurate way but does not find the right elegiac melos. As expected Lauretta’s “O mio babbino caro” turns out the musical climax of the first part. Kim-Lilian Strebel sings it with cold radiant power but little italianità. Tansel Akzeybek as Rinuccio and Günter Papendell in the title role stand out of the cast probably because they have the biggest vocal parts. The young baritone has an impressive powerful and well-trained voice but lacks the comic side of the part giving away lots of the vital humour Puccini had in mind. Photos by Monika Rittershaus