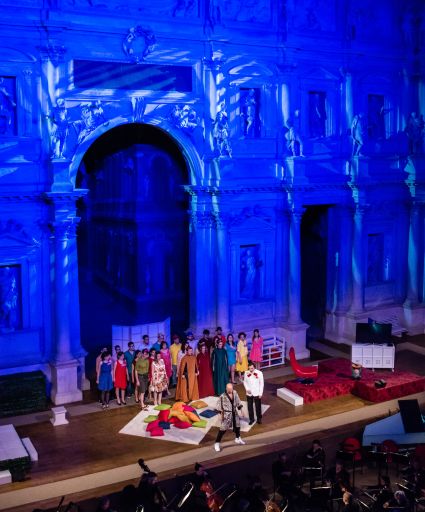 With a final performance of Mozart’s Don Giovanni, the festival “Settimane Musicali at the Teatro Olimpico” in Vicenza drew to a close. The conductor and artistic director of the festival Giovanni Battista Rigon, chose to perform the second version reworked for Vienna in 1788, over the original Prague version of the opera. It excluded Don Ottavio’s ‘Il mio Tesoro’ but included Donna Elvira’s aria ‘Mi Tradì’ and the rarely heard Zerlina Leporello duet ‘Per queste le tue manine’. In this, his latest staging, director Lorenzo Regazzo takes a very personal and singular slant on the Don Giovanni story. Reminiscent of Joseph Losey’s chilling film “The Servant”, the manservant Leporello is the controller who grooms his master Don Giovanni in a life of debauchery.   A gym-honed Don Giovanni moves and dresses like a rapper. The ideal neoclassical setting that the Palladian theatre would naturally provide for a Don Giovanni staging, is overturned in favour of a modern interior decoration, complete with giant television screen and flexible armchair, superimposed on a what could be a prestigious apartment of an antique Italian palace. The costumes and lighting follow suit.  The staging recreates the environment of a popular afternoon Italian trash show where a male sits on a throne and after having received advances from a number of women eventually chooses one of them. It is implied that Donna Anna is a victim of incest and Donna Elvira is a groupie. There are bodyguards, and young girls abound, uncomfortably calling to mind the recent phenomenon of ‘bunga bunga’. In the dinner scene, Don Giovanni sniffs cocaine provided by Leporello, which may explain his overconfidence with the Commendatore. In a distinguished career which has embraced many performances as both Don Giovanni and Leporello, the respected Venetian bass baritone turned director, Lorenzo Regazzo, has certainly had to study his characters in depth. Not one word of text is contradicted by the action, demonstrating just how open the text is to interpretation.   What this production does show, is that parallels can be easily draw between 18th century and 21st century society. Unfortunately, in this particular vision much is sacrificed. Don Giovanni is deprived of his consolidated reputation for daredevil elegance, charm and magnetism, not to mention his courage, irreverence and swaggering defiance. Leporello becomes a shady and threatening manipulator and Elvira a voracious hysteric. The cast, with absolute congruence and consistency, gave remarkably convincing portrayals of the appalling reality show characters.   Luca Dall’Amico‘s ‘tronista’ characterization was frighteningly real! The banality of the figure, however, did not contaminate his clear, commanding and nuanced vocal delivery. Regrettably, Giovanni Furlanetto‘s Leporello resulted colourless, his diction veiled and indistinct. The appealing physical presence of Anna Viola‘s Donna Anna was matched by a potentially impressive vocality. An instability of emission, and a couple of swooping portamentos, belied the ease with which she rose to ringing top notes and a coloratura of precision. Although Arianna Venditelli‘s Donna Elvira was hampered by the overwrought characterization, a rock-solid technique and intense, vibrant timbre allowed her to unfurl bright cascades of agility, and sustain expressive phrasing. Minni Diodati demonstrated a natural and intuitive acting ability which was not reflected in her vocal role. In her mannerisms, Zerlina was dinlineated in minute detail. With the minimum movement of a muscle she expressed Zerlina’s ambiguity between naivety and calculated shrewdness. A well-schooled but generic mode of singing however did not manage to transmit the same sensation. Abramo Roselen, in the double role of Masetto and the Commendatore was at ease both vocally and theatrically. Animated and alert, spirited without exaggeration (apart from the fact that he preferred to play with his game-boy than with Zerlina), his performance contributed a sense of balance. Matteo Macchioni as Don Ottavio, the quietest figure in this turbulent production, sang his role with accomplishment and composure. His clean and direct style, the carrying quality and smooth round texture of his voice, the evenness of his extension together with a gracious manner, gave character to an otherwise static role. The very young chorus was a breath of fresh air, but as yet are still self-conscious and awkward. The Orchestra di Padova e il Veneto, played with brilliance and expressiveness.   The conductor, and artistic director of the festival,Giovanni Battista Rigon, took tight and scintillating tempi in general, but without ever rushing or dominating the singers. Conducting by memory, his rapport with stage and pit was sharp and attentive, his gesture versatile and eloquent. The harpsichordist was a delight of both rigour and creativity! And what a pleasure to hear the mandolin accompaniment in ‘Deh vieni alla finestra’ without amplification thanks to the intimate nature and generous acoustic of the superb Teatro Olimpico. Photo Luigi De Frenza