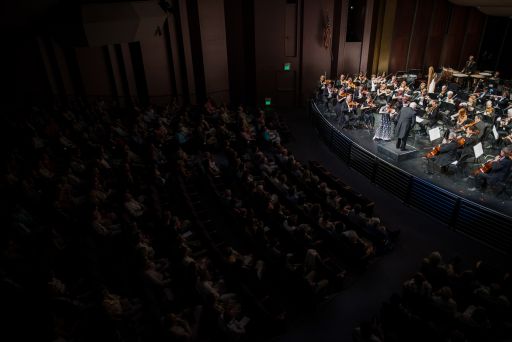 In its closing concert, Napa Valley Festival del Sole pulled out all the stops with not one, but two headliners: violinist Midori and bass Ildar Abdrazakov. The two gave contrasting, but equally masterful performances. Showing its might under the baton of Constantine Orbelian, the Russian National Orchestra (RNO) opened with a vivacious Overture to Orpheus in the Underworld. Most notable in the first half was concertmaster Alexei Bruni’s exquisite violin solo; his meticulous bowing produced a pure, sweet sound. The double bass section played the Galop infernal with grins across their faces, moving and grooving to the rhythm, tempting the audience members to jump out of their seats and bust out the can-can. What a jolly way to start a program!
The pairing of Midori and the RNO for Mendelssohn’s violin concerto was curious yet most fascinating, conjuring up images of a delicate butterfly flitting around a giant Soviet tank. The piece started out briskly and while Midori’s playing was earnest with elegant phrasing, her choice of tempi was somewhat wayward and not my favorite. She frequently rushed past clusters of notes in the first movement, but would always reign it in just in time to meet the orchestra in perfect unison on the downbeat. There are various ways for a violinist to generate momentum and energy in the Allegro molto appassionato. However, her flirtation with the brink of running away produced more anxiety than a sense of urgency. The RNO’s sound was lush, at times almost bursting out of the small space of Lincoln Theater and swallowing Midori’s lyrical, gossamer lines in the second movement. My one criticism of the RNO is their lack of dynamic variety and a limited dynamic range, which fluctuated mostly between mezzo-forte and fortissimo throughout the evening. Nevertheless one can’t help but be in awe of their collective precision and resonance marked by luxuriant textures and colouring. Ildar Abdrazakov was much better matched for the robust orchestra. His singing was at once powerful and nuanced with impeccable breath control, which he employed to produce an ethereal pianissimo line. While the program notes did not provide any lyrics, translations, or information on the pieces performed, Abdrazakov’s persuasive interpretations successfully conveyed the essence of each different role: the concern of a father for his child, the shame of a captured prince, and the jealous heartbreak of Aleko. Showcasing his versatility, the bass ended an otherwise all-Russian set with “La Calunnia,” a Rossini buffo piece complete with silly faces, gestures and even a little dance. Sung with clear, sprightly Italian diction and perfect comedic timing, the performance was so hysterical that it would prompt even Putin to crack a smile. After unrelenting applause and standing ovation, Abdrazakov and the RNO wowed the audience once more with an encore – the triumphant Toreador Song from Bizet’s Carmen. Photographer: Paul E. Richardson – Robert McClenahan