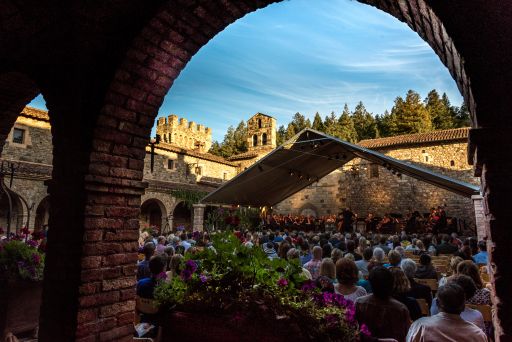 Moscow Nights, an evening of Russian music, was presented on day six of the ten-day Napa Valley Festival del Sole. Originally starring the world-renowned Dimitri Hvorostovsky, last minute replacements were called in when the Siberian baritone cancelled all his summer engagements following a brain tumor diagnosis.  Castello di Amorosa was once again the venue and while its bailey provided a stunning visual backdrop for the performance, acoustically it was not the ideal setting to accommodate as large an ensemble as the Russian National Orchestra. The sound was overwhelming and the voices from the various sections did not blend well, with the brasses especially blaring. Technically the orchestra members were proficient under the baton of Constantine Orbelian, who applauded generously for all of the soloists and as a humorous result, conducted the audience to applaud on his beat at the end of each set.
Due to the sheer volume of the orchestra, the singers were given microphones so they could be heard over the instruments. This proved to be a necessity for tenor Daniil Sthoda who’s performance was inconsistent throughout the evening. He opened with Lenski’s aria, “Ya Vas Lubliu,” which was so quiet it made me wonder if the mic was really on. His volume improved with “Kuda, Kuda” although he was very stoic in his portrayal of a young poet on the cusp of impending doom. Rodion Pogossov, on the other hand, had no need for any amplification. The moment he opened his mouth out came a tidal wave of formidable sound. As Onegin, he was the perfect embodiment of the Byronic hero: confident, authoritative, and mysteriously aloof.
The amateurish performance by Russian-born cellist, Nina Kotova, was rather incongruous with the rest of the talent on stage. Her attempt at Tchaikovsky’s Variations on a Rococo Theme was lackluster with monotonous phrasing, scratchy bowing, and little dynamic variety. The virtuosic passages were effortful and devoid of charm. It was as though she had to concentrate so hard on getting all the notes right that there was no more bandwidth left for musicality. Not once, during the second variation, does one get the sense that she’s having a spirited conversation with the orchestra. No witty banter, no playful repartee; just another self-absorbed soloist plowing through the music and expecting her colleagues in the orchestra to follow along. Disruptive applause after each variation, despite protest from the conductor, followed by a boisterous standing ovation at the end of the piece gave away the dilettantism of the audience. The “talent on stage” showed up in the form of a folk ensemble by the name of Style of Five, Russia’s answer to Nickel Creek, who rocked out on traditional Russian instruments: gusly, domra, bayan (accordion), and the double-bass balalaika. Style of Five was delightful. Each instrumentalist played masterfully, but most importantly they had fun on stage and their joy was infectious. They performed how an ensemble should – by listening to each other, engaging in a dialogue, playing off each other, and breathing new life into old music. Pogossov and Sthoda traded off singing various Russian folk songs, and brought down the house with a duet of Moscow Nights. Photographer: Paul E. Richardson – Robert McClenahan