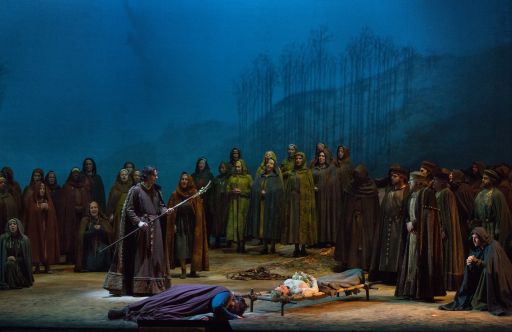 The Otto Schenk “Tannhäuser” at the Met: An Oldie, but Goodie

New York, Metropolitan Opera, Season 2015 /2015
“TANNHÄUSER”
Opera in three acts. Music and Libretto by Richard Wagner
Hermann, Landgraf of Thuringia  GÜNTHER GROISSBÖCK
Tannhäuser  JOHAN BOTHA
Wolfram von Eschenbach  PETER MATTEI
Walther von der Vogelweide  NOAH BAETGE
Biterolf  RYAN McKINNY
Heinrich der Schreiber  ADAM KLEIN
Reinmar von Zweter  RICARDO LUGO
Elisabeth  EVA-MARIA WESTBROEK
Venus  MICHELLE DE YOUNG
A Young Shepherd  YING FANG
Orchestra and chorus of the Metropolitan Opera
Conductor  James Levine
Chorus Master  Donald Palumbo
Production  Otto Schenk
Set Designer  Günther Schneider-Siemmsen
Costume Designer  Patricia Zipprodt
Lighting Designer  Gil Wechsler
Choreographer  Norbert Vesak
Stage Director  Stephen Pickoer
New York, October 8, 2015
When explaining the relevance and appeal of opera to a group of hiphop-loving inner city youths last week, I channeled Fred Plotkin’s recent article and used Tannhäuser as an example: “There’s a ballet orgy in the beginning, followed by a song contest with a bunch of smack talking, just like a rap battle (but it’s opera). E finds out her beloved T-Dawg has been a triflin’ hood rat, but she nevertheless forgives him for hooking up with V. It’s like an episode of Empire, only 3 hours longer.” When I told them a cute little Jewish man with a ‘fro would be conducting and that rush tickets are only $25, they asked me to point them in the direction of Lincoln Center. “It’s that way,” I said “just follow the evening star!” The Met’s revival of the 1977 Otto Schenk (Paris) production of Tannhäuser opened last Thursday with “Jimmy” back at the podium. While the maestro may have been the star attraction  that evening (due to his ailing health it’s a rare treat to see him waving his baton these days), it was South African tenor Johan Botha who stole the show. For someone who is not a natural actor, Botha relied on his vocal prowess, in lieu of blocking, to convey his character’s inner conflict. His sound was sweet and pure, as a minstrel’s sound should be, and he sang effortlessly with shimmering, delicious legato lines and showed no signs of fatigue at the end of four hours. Even when he sat still in the final act to recount his punishing, unfruitful pilgrimage to Rome, the singing of his narrative carried enough nuance and emotion to inspire empathy and kept the audience fully engaged (no background animation, à la Lepage Walküre, required). As I put it to my gaggle of urban youngsters: “He sang the shit of out of it!”
As Venus, mezzo-soprano Michelle DeYoung did not disappoint and held her own alongside Botha’s powerful instrument. She’s all that a siren is expected to be: seductive, mischievous, charming, playful, confident in her power over men. The sensual, earthy coloring of her voice turned steely and taut when she struggled with the realization that Tannhäuser was no longer captivated by her spell.  Soprano Eva-Maria Westbroek, who first made a favorable impression on me as Sieglinde in both the Zambello and Lepage Ring Cycles, was not at her best. She came out over-singing “Dich, teure Halle” with excessive, jarring vibrato and while she filled the opera house with ample sound, it was not a pleasant one. Westbroek did, however, succeed in portraying the duality of Elisabeth’s complex character. At the beginning of Act II we see an impassioned woman with very human and urgent desires. Tannhäuser to her, is as much of a muse as Venus is to the Minnesinger. In many ways she suffers from the same form of Sehnsucht, or longing, that plagues our hero. We hear much better singing from Westbroek in Act III as Heilige Elisabeth, one who has embraced asceticism and piety. This saintly figure is a striking contrast to her earlier portrayal of the princess, and I suspect that Westbroek may have over-sung initially to emphasize the disparity. Peter Mattei, an earnest and devoted Wolfram, delivered a moving “O du, mein holder Abendstern.” Ironically the Evening Star is the planet Venus as it appears after sunset, perhaps hinting that Elisabeth is Wolfram’s Venus and source of inspiration. Bass Günther Groissböck sang with authority with an occasional unsteadiness in the very low notes. Although her part was small, soprano Ying Fang gave a noteworthy performance as the young shepherd with clear, impeccable intonation.  Despite his noticeably labored conducting, James Levine was able to rally after a somewhat tepid and blemished overture. The Venusberg music dazzled with magic and the swelling undercurrents of the haunting Pilgrims’ Chorus has become my inspiration for the week. We could all use an evening star to guide us; we could all use a Venus as a muse. Photo by Marty Sohl/Metropolitan Opera.