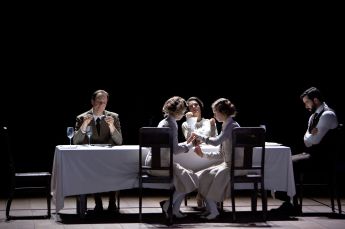 The recent première of Debussy’s “Pelléas et Mélisande” at the Komische Oper Berlin made it clear again how much Maurice Maeterlinck’s plays matched the Zeitgeist of the fin de siècle. While “Ariane et Barbe-Bleue” and above all the story about the mysterious Mélisande whose family background largely remains a secret and who falls in love with her husband’s step-brother gave rise to numerous musical implementations by Paul Dukas, Gabriel Fauré, Arnold Schönberg, Jean Sibelius and Claude Debussy in the end, other plays had not become a focus of composers until the Berlin-based Aribert Reimann turned to three of Maeterlick’s one act plays which he put together to “L’Invisible”, a Trilogie lyrique sung in French and commissioned by and premièred at the Deutsche Oper Berlin on 8th October 2017. The composer has been closely linked with the opera house for more than 60 years. He took on his first job there as a répétiteur in 1955 and it is proud that his operas “Melusine”, “Die Gespenstersonate”, “Das Schloss” and now “L’Invisible” have seen their world premières at the Deutsche Oper. Reimann chose three short dramas by Maeterlick that are family stories about death with children directly or indirectly involved. The instrumentation is quite unusual. The first plot “L’Intruse” (The intruder) combines the first cry of a baby with the death of his mother. Reimann composed it exclusively for string players with a surprisingly broad sound. In “Intérieur” an old man is pondering if he can destroy the Christmas spirit of a family by the news that their daughter has drowned in a river. This second part is composed for the woodwinds only while the composer uses the full orchestra including brass players, drums and two harps for the third and longest part “La mort de Tentagiles” about the assassination of a young heir to the throne. The much sought-after stage director Vasily Barkhatov has placed the three stories in the same setting created by stage designer Zinovy Margolin. There is a row of houses that can be moved back and forth to provide space for the family’s dining room in the first part or a shop-window like view of the living room at Christmas in the second. Video projections by Robert Pflanz are the final touch. There are shadow images of the acting persons, flashbacks and live silhouettes which are sometimes merged or interfering with each other. It is Barkhatov’s brilliant idea to set the third part in a palliative care unit for children where two nurses (Ygraine and Bellangère) and a doctor (Aglovale) are trying to alleviate a boy’s forthcoming death by pretending that he is taking part in a play about Prince Tentagiles. It ends up in a flashback of a burning car and the badly injured boy lying in the street. Olga Shaishmelashvili’s costumes are reminiscent of the 1950s. The Orchester der Deutschen Oper Berlin under the baton of Donald Runnicles and Reimann’s score make a good match. That refers to both musical intensity and consideration for the singers. Moderate dissonances between death chord and harmonic clusters leave enough space for them to create a chamber-music sound. The clear and in the last part outrageously agile soprano of Rachel Harnisch is ideal for the three major female roles of Ursula, Marie and Ygraine supported by the contrasting mezzo of Annika Schlicht in the sister roles of Marthe and Bellangère. Stephen Bronk’s bass sounds sublime as both the blind grandfather in the first plot, the old man in the second who has to convey the terrible news about the dead daughter, and the sisters’ brother Aglovale who is trying to save the life of Prince Tintagiles convincingly played by Salvador Macedo, a member of the children’s chorus of the opera house. Thomas Blondelle finds beauty of expression in depressive moments. The cynical uncle at the beginning turns into a touching stranger and his powerful tenor suddenly sounds delicate and gentle. He seems to have specialised in unstable characters. Seth Carico is a desperate father with his virile baritone and Ronnita Miller makes most out of her short appearance as the family’s servant. The unpretentious countertenor trio of Tim Severloh, Matthew Shaw and Martin Wölfel connects the three parts with comforting interludes to finally appear as the three servants of the Queen who act as messengers of death throughout the 90 minutes. Altogether “L’Invisible” is a successful opening of the 2017/18 season at the Deutsche Oper Berlin that continues promoting modern opera with Aribert Reimann as its icon. Photo Bernd Uhlig