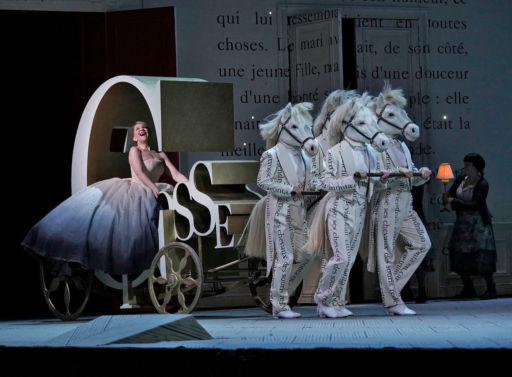 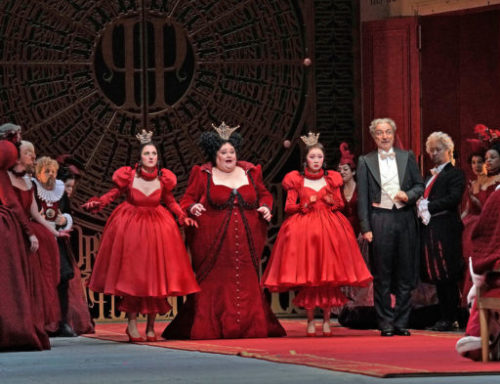 The final production of the Met’s current season is the house premiere of Massenet’s Cendrillon. The piece is an opéra-comique, small-scale piece, without grand pretensions. Laurent Pelly’s production, however, is very grand, very handsome and very skillful, and before its “debut” at the Met, was seen at Santa Fe, Covent Garden, Barcelona, Brussels and Lille. The Met seldom builds its own productions any more, but this one fits the cavernous Met stage better than most Santa Fe imports do.
Barbara de Limburg’s set within the set keeps us in the proper domestic arrangement for Cendrillon’s bickering family (father, stepmother, stepsisters) and opens up to permit the Fairy Godmother to work her magic. The long, elaborate ballet is wittily choreographed (lurching dances by Laura Scozzi, hilarious costumes in many shades of crimson by Mr. Pelly) so as to become not a time-serving, yawn-inducing divertissement but the delicious comic high point of the evening. The magical forest is an array of chimney tops where Cendrillon and Prince Charming sing to the Fairy Godmother of their dreams and do not see each other—as they wouldn’t if they were, indeed, dreaming. The evening is sweet and swift-moving; Massenet flows serenely by under the excellent hands of Bertrand de Billy.
The Met has fielded a top-notch cast to put this score over. Indeed, the clowns (Stephanie Blythe as 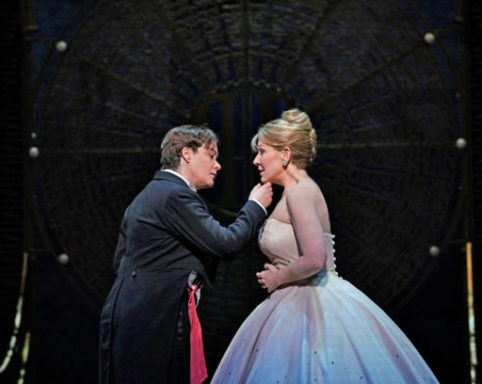 the wicked stepmother, Laurent Naouri as Cendrillon’s milquetoast father, Ying Fang and Maya Lahyani as the stepsisters) are having such an uproariously good time, bestowing on the music a glamour it can seldom have achieved at the Opéra-Comique in the composer’s day, that the lovers, Joyce DiDonato and Alice Coote, almost fall into the shadows behind them. Massenet comes to the rescue, here, giving his Cinderella a splendid aria in Act III (after the ball) about running home in terror of what she sees or doesn’t not quite see in the darkness—and then segueing into her dawning feelings for the Prince, and DiDonato knows exactly what to do with it, her lush, velvet voice (strained a tiny bit at the top of what is, after all, a soprano role) inhabiting the race of terrors and then the turn of intimate heart.
Coote’s Prince is not such a success—indeed, the comment I heard most often in the crowd was puzzlement that a woman was singing the role, as if no one present was aware of the French theatrical custom of having young women portray adolescent boys, the more oversexed the better—think of 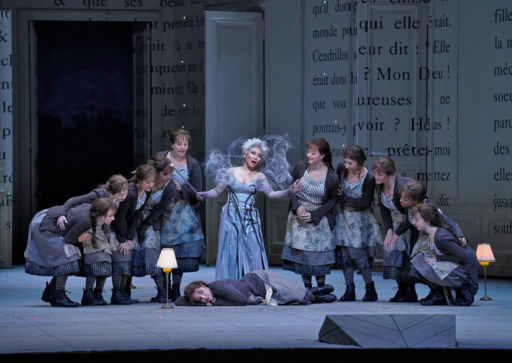 Chérubin in Beaumarchais and Mozart and, in the opera Chérubin, Massenet’s treatment. But Coote’s Prince, though passably well sung—she seemed, at times, not in perfect control of her voice, of letting fly without keeping to the precise, French nature of the score—was not gamine enough, a bit too stout and mature, to make a credibly dreamy prince. And the love duet that concludes Act II (just before the clock strikes twelve, another brilliant Pelly touch), did not give them a melody or an atmosphere of any great depth. Coote, whom I have seen as a superb Octavian, did not inhabit the more delicate Prince Charming.
The unpredictable star of the evening, holding her own against not merely DiDonato and Coote but even the formidably Wagnerian stepmama Blythe, was Kathleen Kim, her high-sailing soprano fearless and gossamer, cradling the story in her arms, svelte and sexy in a violet silk number that looked even more superb compared to the red parody outfits of the court ladies. We believed in Kim as a fairy, and in every sparkling work of her magic wand and her pave-diamond sound. Cendrillon was a chic and superb entertainment, and brought a happy theater to its feet. I feel sorry for every opera-goer’s child who is not taken to see it. Photo: Ken Howard / Met Opera