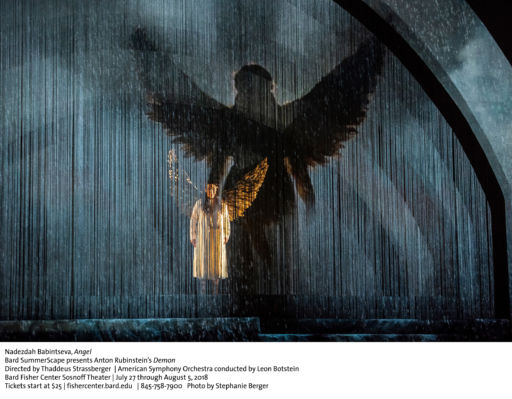 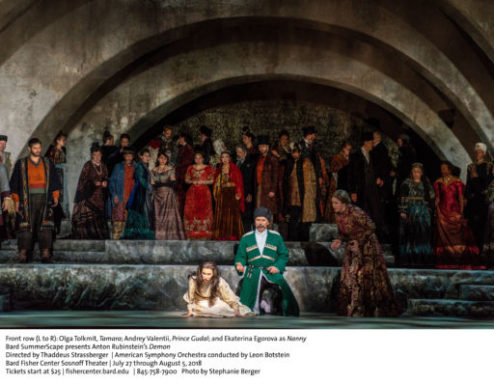 Anton Rubinstein was among the most illustrious pianists of the nineteenth century; his concert tours of Europe and the United States raised the money to build the St. Petersburg Conservatory. He was also the composer of concertos, symphonies, songs and a dozen operas, but little of his music remains in the repertory. Leon Botstein, maestro of the Bard Summerscape Festival, has suggested that the reason was Russian anti-semitism, and this was certainly a stumbling block—though his family had converted to Orthodoxy, the prejudice against Jews lingered in the Russian atmosphere, in music as in other fields of endeavor. Four of the Mighty Five Russian nationalist composers (Mussorgsky, Borodin, Cui and Balakirev—all of them but Rimsky-Korsakov) disdained Rubinstein as a Jew and—gasp!—a cosmopolitan, the most Russian of insults, and Summerscape this year has taken Russian nationalism as its theme. The production of Rubinstein’s best-known opera, Demon (not very often encountered in Russia, either) provides an opportunity to consider the man’s reputation on its merits. Botstein’s American Symphony Orchestra gave this elaborate late romantic score a polished, enthusiastic reading that delighted the audience on August 1 (when I saw it) and had already drawn rave reviews the previous weekend. (There were five performances in all.) The Russian singers, Bard Festival Chorale, a troupe of dizzying Georgian dancers, gorgeous costumes and impressive sets gave the opera a worthy shine.   Based on a Lermontov fable 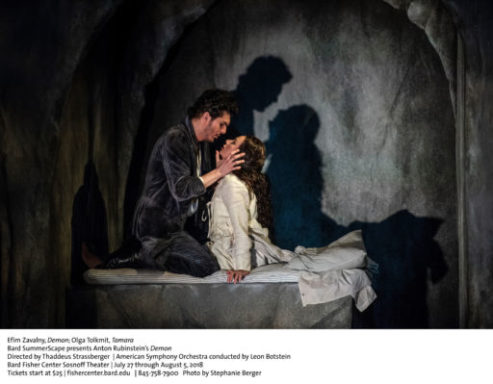 about a Satan-figure who tempts a Georgian princess, Demon suffers from a weak libretto, talky but short on action. The music is melodious and the writing displays great voices to appealing, sometimes magical effect. The orchestration is expert. But the dramatic quotient does not rise, does not tempt and move. The characters are static; they do not develop. There is no religious doubt in Tamara as she resists, then succumbs, to the lonely Demon, and he is solitary, relentless and malicious from first to last. One can read the entire plot as a woman in a convent fighting with her sexual fantasies, but that doesn’t offer much action. The Tartar raid on the camp of a Georgian prince, the endless wedding festivities for the groom we know will never arrive, do not raise tension: they pass time. Rubinstein knew Wagner’s music, and he seems inspired by Wagner’s method without Wagner’s sense of when to build an effect or how to explode at the climax of a scene. Rubinstein’s effects are often beautiful but they lead nowhere. Nor is the lush strangeness of the folk harmonies that Mussorgsky and Borodin brought to the Russian operas that first captivated the west easy to distinguish in Rubinstein’s work. This has nothing to do with Rubinstein’s Jewishness, just to an artist’s response to drama. His melodies are grounded, like Mussorgsky’s, in the chants of Orthodox ritual, but Mussorgsky knew how to imply activity with those uneasy resolutions. Too, in Boris Godunov, he had Pushkin’s play to guide him. 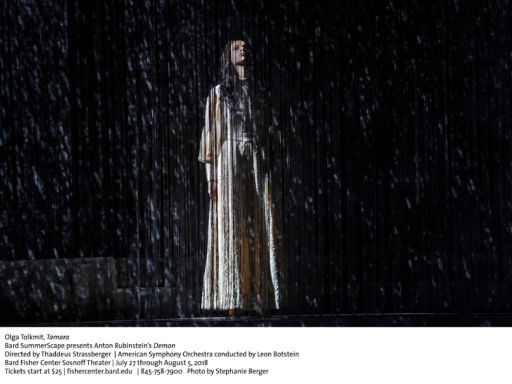 At Bard, the staging was in the hands of Thaddeus Strassberger, who has produced most of Botstein’s operas there, including Genoveva, Les Huguenots, and Die ferne Klang. His manipulation of the narrow stage, electronic projections (by Greg Emetaz and JAX Messenger), Kaye Voyce‘s vivid and exotic costumes, the multiple playing levels and choreography produced a seamless whole from disparate elements. But the music seemed to drag, and the tableaux grew repetitive. An inner set of five monkish cells came in, each one inhabited by a tormented postulant—Tamara or five doubles of Tamara. The Demon ambled from one to another, visible or invisible to the desperate princess, leaving stray puffs of smoke in his wake.
Botstein’s cast were all Russian; Americans would not find it easy to sing this long and often difficult score idiomatically. Efim Zavalny took on the all but endless title role with dignity, irony, ardent and fiendish seductions. The voice soars and sighs without a weakness in the great range required of it, and, clothed in punkish tatters (he is visible, supposedly, only to Tamara), he made a fine impression. Olga 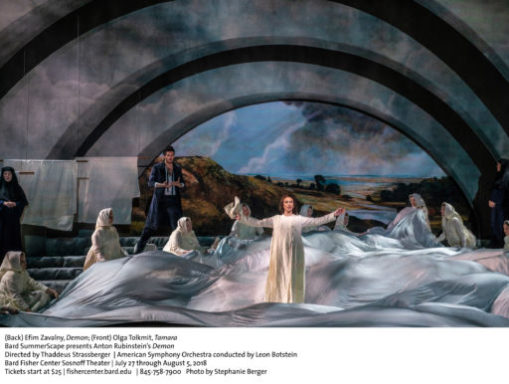 Tolkmit, previously heard at Bard as Xenia in Dvorak’s Dmitrij and Electra in Taneyev’s Oresteia, sang Tamara with dark-timbred soprano fire. The Strassberger conception makes it possible that she is a nun-postulant hallucinating the entire story, and her desperate acting ate up this interpretation. Nadezhda Babintseva sang the role of the Angel contesting with the Demon for Tamara’s soul—she wins, of course. Babintseva kept up with the others for loudness, but her mezzo-soprano is of less an even, less than spiritual character. Prince Sinodal, Tamara’s betrothed, sings a lengthy fireside romanza while his men drift off to sleep; then Tatars (summoned by the Demon) ambush and kill them. Alexander Nesterenko, who sings many French and Italian romantic tenor leads, made a lovely thing of this solitary peaceful moment. Andrey Valentii sang Tamara’s woebegone father, Prince Gudal. But the voice that jumped out at us and made the heart stand still belonged to a bass named Yakov Strizhak, far too young and robust for a character named the Old Servant, with a theater-filling voice that recalled the great Russian basses of yesteryear. He is tall, sturdy and moves well on stage. If you are casting Boris, Igor, Gremin or Kontchak, this is the lad who will have audiences at his feet. Photo by Stephanie Berger