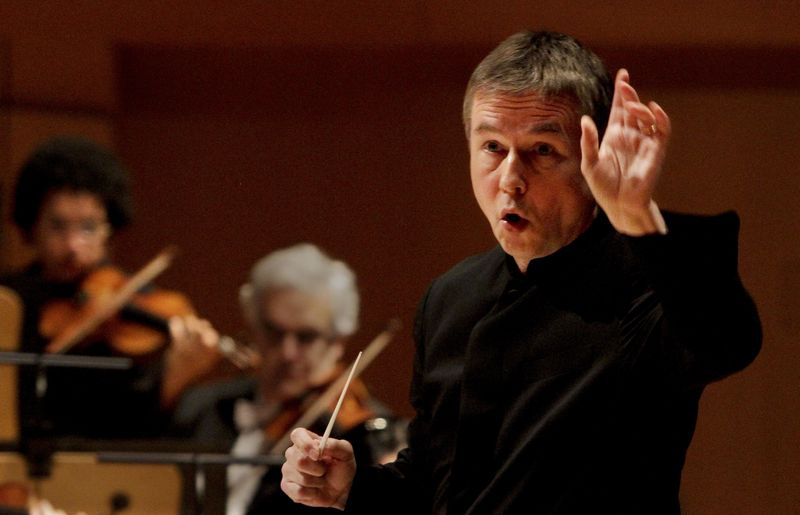 Verona, Teatro Filarmonico, XXVII Settembre dell’Accademia 2018
Philharmonia Orchestra di Londra
Conductor Esa-Pekka Salonen
Arnold Schönberg: “Verklärte Nacht” Op. 4 ( Transfigured Night)
Anton Bruckner:Symphony No.7 in E flat major
Verona, 22nd  september 2018
After their triumphant appearance last year in Verona, the Philharmonia Orchestra conducted by Esa-Pekka Salonen returned this year with their elegant and dynamic contribution to the Il Settembre dell’Accademia concert series, in a programme devoted to the late Romantic, Mitteleurope repertoire, Schönberg’s Verklärte Nacht and Bruckner’s monumental 7th Symphony. Verklärte Nacht, originally written for string sextet, in what is a more rarefied and intimate rendering, was performed on this occasion in the version for string orchestra; in this case a very substantial string section. It is a tone poem, inspired by a poem by Dehmel about a confession from a betrothed during a walk in the moonlight. It is made up of a single movement of intense lyricism, breathtaking in its synthesis between tradition and innovation. The dramatic tension that the orchestra illicited from Schönberg’s use of devises to further emancipate dissonance and chromaticism, weaken the sense of tonal location, and superimpose themes over eventual resulting dissonant harmonies, was spellbinding and moving. The warm, vibrant and often plaintive sound of the lower strings, and the both silvery and surging strains of the violins created a densely textured web of ever-transforming motifs. Led masterfully by Salonen’s firm and confident guidance, the treatment of the complex scoring obtained maximum expression in rendering both the depiction of moonlit nature and a profound representation of human emotion, easing to the final fading of the transfigured motifs at the end which left the audience in rapt silence.
Anton Bruckner’s 7th Symphony is characterised by great spaciousness and profound solemnity, of grief and lamentation, but also of transcendence. With its monumental architecture and intensity of sound it has moved listeners since its triumphal premiere in 1884. If Schönberg declared himself to be following in the footsteps of Wagner, Bruckner until the end of his creative life was a declared Wagner fan and acolyte. 7th Symphony was composed when Wagner’s death was imminent, and in fact he died while Bruckner was working on the second movement. And so it was that Bruckner decided to insert the Wagnerian tubas dedicating the Adagio of the 7th to the memory of Wagner.
The 7th is the most popular work of Bruckner, a happy fusion between inspiration and technical mastery. On the one hand there is an abundant effusion of melodies and on the other a coherence and formal balance. Salonen with large ample gestures, unadorned and devoid of rhetoric, physically embraced the grandiloquence of the work and the enormous orchestra with a firm, direct approach. He dominated the powerful work without ostentation or emphases. The phrasing flowed seamlessly and expressively notably in the cello section. His connection and mutual understanding with each section of the orchestra was palpable, the fruit of a long and fruitful collaboration in this repertoire. The orchestra began with a luminous awakening, in a theme which expresses a profound emotive tension. The growing regal solemnity in the following slow ascending arpeggio, the lyrical woodwind theme, the later episodes of a rustic and martial character, the fanfares of the brass, and the lucid definition of the formal and symmetrical structure were all executed with precision and style. The beauty, polish and homogeneity of the brass section was immediately established and this certainty was strengthened in their glorious second movement. The opening on the Wagnerian tubas in unison with the violas was perfection. A burnished focussed sound, technically flawless and musically refined. The same can only be repeated in regard to the playing of the entire brass section. The string playing was outstanding for the intensity of line and clarity of texture. The high level of expressive concentration and the extreme intensity of the second movement make it one of the absolute high points of Bruckner’s art. After the intensity of the first two movements, but without relaxing the dramatic tension, the energetic scherzo and simple and melodic trio offered a moment of pastoral simplicity before proceeding to the grandiose and triumphant finale. The end of the Symphony was greeted, as was to be expected, with a roar of approval.