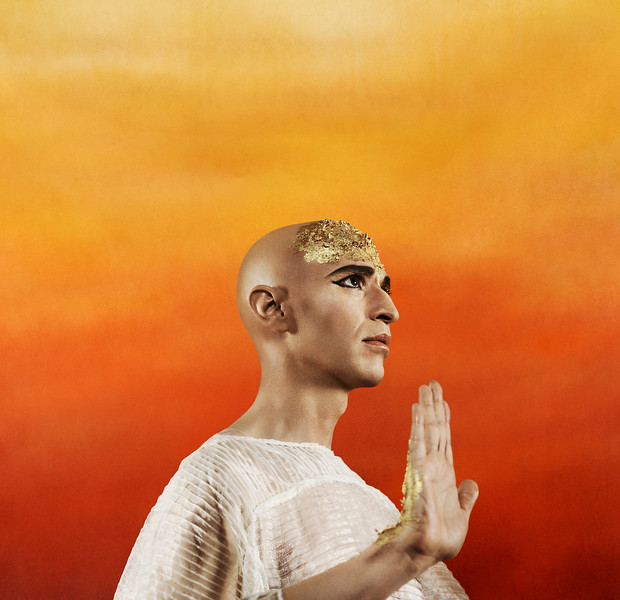 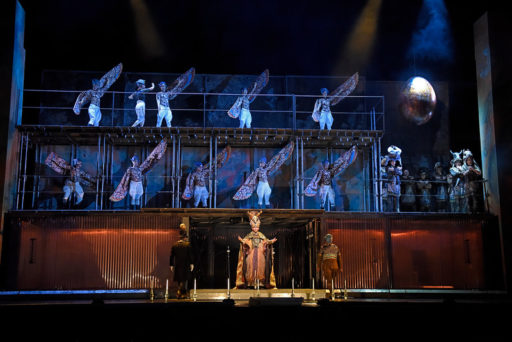 The score, like most Glass scores, was inactive. Many writers have been saying this fall, apropos of the sellout hit that Akhnaten has proven to be at its Metropolitan Opera debut, that it’s a “disgrace” the opera has not appeared in New York in 35 years, but this is, to say the least of it, unfair. We were given nothing much, back then, to like, and Glass, in three tries, did not have a winner at the Met until Satyagraha in 2008. Satyagraha (which some say is part of a trilogy with Akhnaten and Einstein on the Beach) was designed for the Met by Phelim McDermott, who has returned with Akhnaten. It is a case of an ideal interpreter encountering a composer who is not every opera-goer’s meat. The triumph this fall has been as much McDermott’s as Glass’s.
Other things have changed as well in the many years since Einstein on the Beach was a succès scandaleuse back in 1976. Has Glass learned how to apply his idiosyncratic and far from dramatic style of composition to action, or has the New York operatic audience begun to take pleasure in his meditative longueurs? It’s a bit of both, I think. The triumph of Satyagraha paved the way for the Met to essay Akhnaten, and near to hand was the McDermott production that had proved a success at both the English National Opera and the Los Angeles Opera. 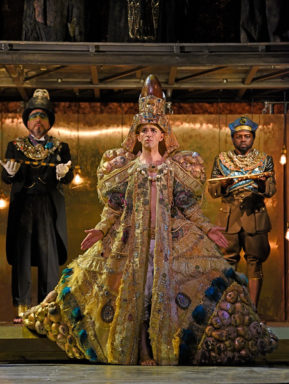 Too, countertenor Anthony Roth Costanzo, a much admired figure in New York, at the Met and in many smaller projects, was both able and eager to perform the title role. It is really no surprise that the Met waited so long to address the work; it has arrived at precisely the right time, as is certainly proved by the sellout of the run, the popularity of the HD broadcasts, the return of the opera to the Met now abruptly scheduled for two years hence.
But Akhnaten—like most Glass operas—still has no action, no plot, in the traditional sense. Arpeggios are repeated ad infinitum; the chords change majestically as one scene ends and another begins, and the stiffening and relaxing of tension are significant moments, but within each moment, each harmonized chord, nothing active occurs. Glass’s arpeggios are harmonized when more than one singer joins in—but they are usually singing the same words or syllables to identical melodies; these are duets or trios in the style of Handelian opera seria, one emotion, two characters. 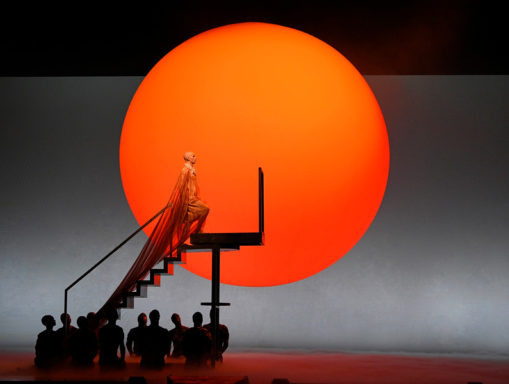 They are not the active confrontational duets and trios and sextets of the nineteenth century, where things happen in the course of a multi-person movement. In Akhnaten, issues are mentioned if not addressed, tableaux proceed. There is an arc to the opera: the new pharaoh succeeds to the throne, proclaims his religious revelation, builds his new capital city (in order to disempower the priests and temples based in older cities), sings the Hymn to the Sun that the real Akhnaten bequeathed us, plus a love duet with his queen and a family fugue with their six daughters. And then, because he refuses to address Egypt’s problems as a power or to fight Egypt’s many enemies, he suffers invasion and rebellion. He and his city are destroyed. A new king (Tut) is enthroned. In an epilogue set in modern times, the ghosts of the king, his wife and his mother lament the tragedy—except that it’s not a tragedy. 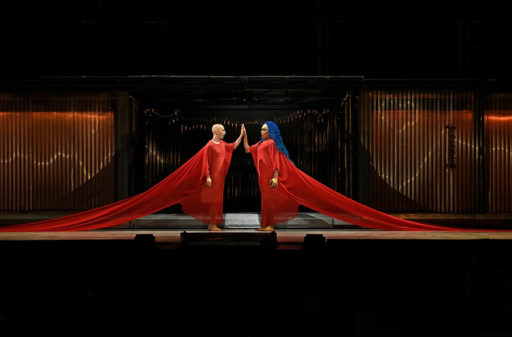 There has been no tragic action. Akhnaten has risen and has fallen but we have not seen within him or the others what the spirit has undergone, the psychological explorations that are the glory of nineteenth-century opera. What we have seen is a stately ritual with sung passages—a style of theater that predates personal tragedy, perhaps, and certainly predates opera, which has its roots in the musical settings of church ritual. But it is not drama. 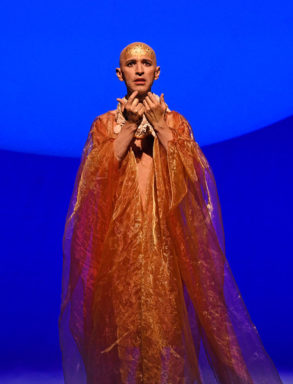 We fall into trance under the spell of this music but we do not know these people as individuals, with lives and feelings revealed to us by their singing. Emotional content is not what Glass’s music is about. And yet the trance induced by repetition in ritual circumstances takes us places, just as Gluck’s stately dramas and Wagner’s reiterations of conflict will do.
The McDermott staging makes ritual drama out of a story (and score) short on action by providing an active action to accompany the stately pace of the music. In particular, the use of Sean Gandini’s company of jugglers is a masterstroke. If you have not seen the production (and it will certainly be widely available for electronic perusal after the highly successful HD telecasts in dozens of countries), you may wonder that critics make so much of the jugglers. They do much more than juggle. 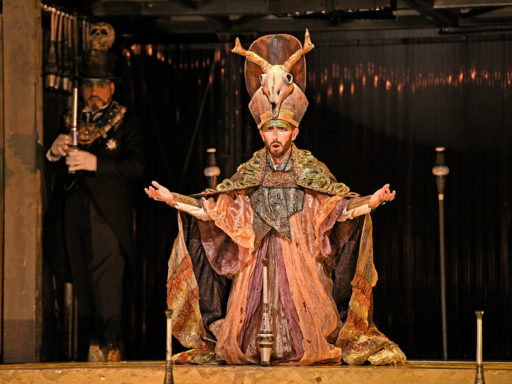 They fill the slow-moving and possibly tedious time with lively activity, always based in the rhythms of the score. Their juggling to imply ritual adoration of Aten (as if the hands of an innumerable crowd were waving), building the city of Amarna (the balls in the air growing more numerous and ever higher), reforming the faith of the people (as ninepins replace balls), hunting wild game or wild enemies (the ninepins, astonishingly, turn into bows and arrows before our eyes and the hunters resemble paintings one has seen from the walls of Egyptian tombs), worhiping the sun disk (in this case, a globe on which Bruno Poet’s lighting plays in poetic sequence) and, at last, stoning and reviling the helpless king who has permited foreign enemies to swarm all over Egypt, and at last succumbs to the determined and conservative rebellion of his own chief priests and dignitaries. It is elegantly done and wittily managed. 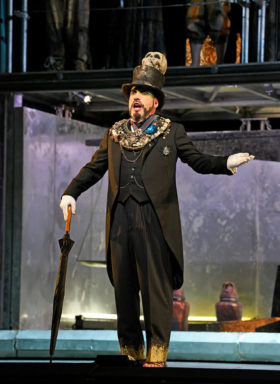 It gives one events to hang on to while the repetitive score is passing by, to hold attention, to hypnotize on the visual level while the music is doing the same on a totally different level. After the tedious NYCO staging, it was a charming relief; after the Champaign-Urbana staging, livestreamed a few years back, which first drew me to return, with pleasure, to a score I had disliked, I’m not sure the juggling is necessary for this opera to make its point, but as reviewers often commented back in 1984, without something in the staging to hold attention and create a structure for the observer’s imagination, the opera is a soundtrack, of limited musical interest.
Tom Pye’s sets and production design masterfully produce three-dimensional visions of the Egyptian symbology fixed in all our minds from exposure to so many museum exhibits, so much exposure to the tomb of Tutankhamun, the movies of Cecil B. DeMille et al.Kevin Pollard’s costumes are fun but puzzling, seemingly aiming for universal symbols of regal dignity (or indignity) and the sinister qualities of the Apparatchik. Why was Amenhotep III wearing four Rolex watches on his wrists? 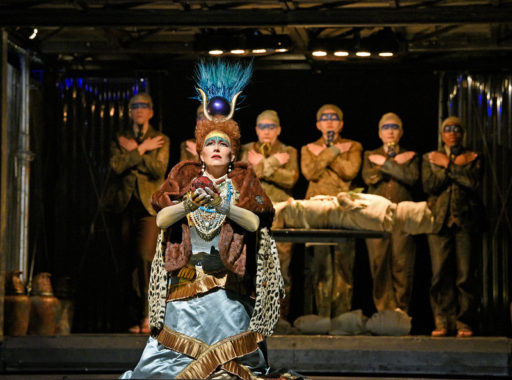 Why was Queen Tye dressed and costumed to resemble brocaded Queen Mary of Teck? Why was Aye got up as Baron Samedi, the Voodoo orisha of Death, umbrella, top hat and all? Not that all this was not more entertaining to watch than Nefertiti’s blue hair-do or Akhnaten’s mercifully brief nudity in the coronation scene. Roth Costanzo has gone quite public with how much he had to train before he risked performing this scene. But his body still appears slight and sexless, entirely hairless, more curiosity than cynosure. This is appropriate, of course, to the depilation of ancient Egyptians in their art, and also to the “naturalism” that was an aspect, whether religiously mandated or fashionable, of Akhnaten’s “reformation.”
Roth Costanzo has rather a nasal than lyrical countertenor, an attractive but not a sensuous sound, more sexless than sexed (either gender; your pardon, any gender). 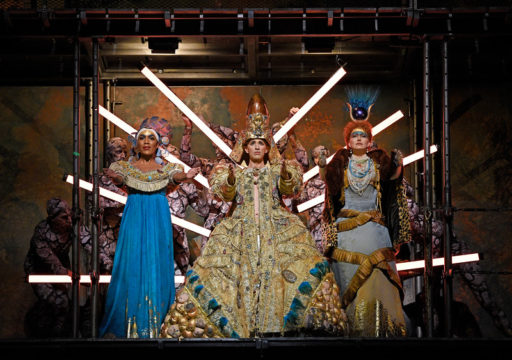 He uses it dramatically and that suits the music he tends to choose. He is an initiator and director of projects as well as a participant, but here he has allowed himself to be subsumed in the entire production. He is the star, but Akhnaten is so grand a picture that there is no star. His centrality does not leap forward to the footlights; he gladly joins the other singers, or rather brings them in to join him.
Disella Lárusdóttir portrays his doting mother (the scenario hints that she is the origin of his monotheism, whether by worship of her son or by secretly having a conversion experience), with flaunting fan and stratospheric sound. J’nai Bridges sings the mezzo role of Nefertiti, which includes a glowing duet with her husband. The three representatives of the Egyptian Old Guard, two of whom will succeed to the throne after Akhnaten’s destruction—Aye, Horemheb and the High Priest of Amon—mutter in harmonized Egyptian monosyllables, moving in a group like those similarly dark-voiced operatic heretics, the evangelists in Meyerbeer’s Le Prophète. 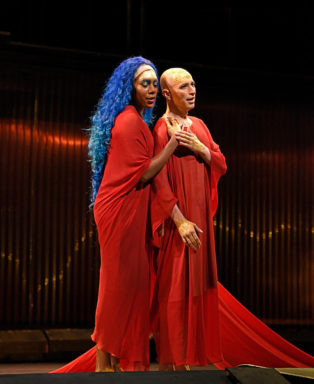 They are played to the formal hilt as subservient hypocrites and successful rebels by Richard Bernstein (a house stalwart who was also striking in Satyagraha), Will Liverman and Aaron Blake. The most striking performance, after Akhnaten’s, however, was the speaking role of Amenhotep III, Akhnaten’s (late) father, who remains on stage to introduce the scenes, chart the progress of the heretic’s reign and with unemotional but full-bodied delivery condemn the king’s defeat while seeming to remain neutral. Zachary James made so much emotional impact while speaking these lines in his highly individual bass-baritone that one had to wonder about the contrast with the static, unemotional proclamations of the singing “characters.” Is this really an opera if a speaker has the most interesting things to do?
Whatever the final judgment, the opera sold out the house and overwhelmingly delighted the Met audience. There were grumbles from lovers of more traditional opera and from those who have always disdained the Glass method, but it proved hearteningly easy for those old timers open to the presentation (such as this writer) to permit themselves to be carried away. Certainly the opera had a more immediate musico-dramatic effect than most of the other “modern” (post-Britten) works given at the Met. The box office has spoken. Photo Karen Almond / Met Opera