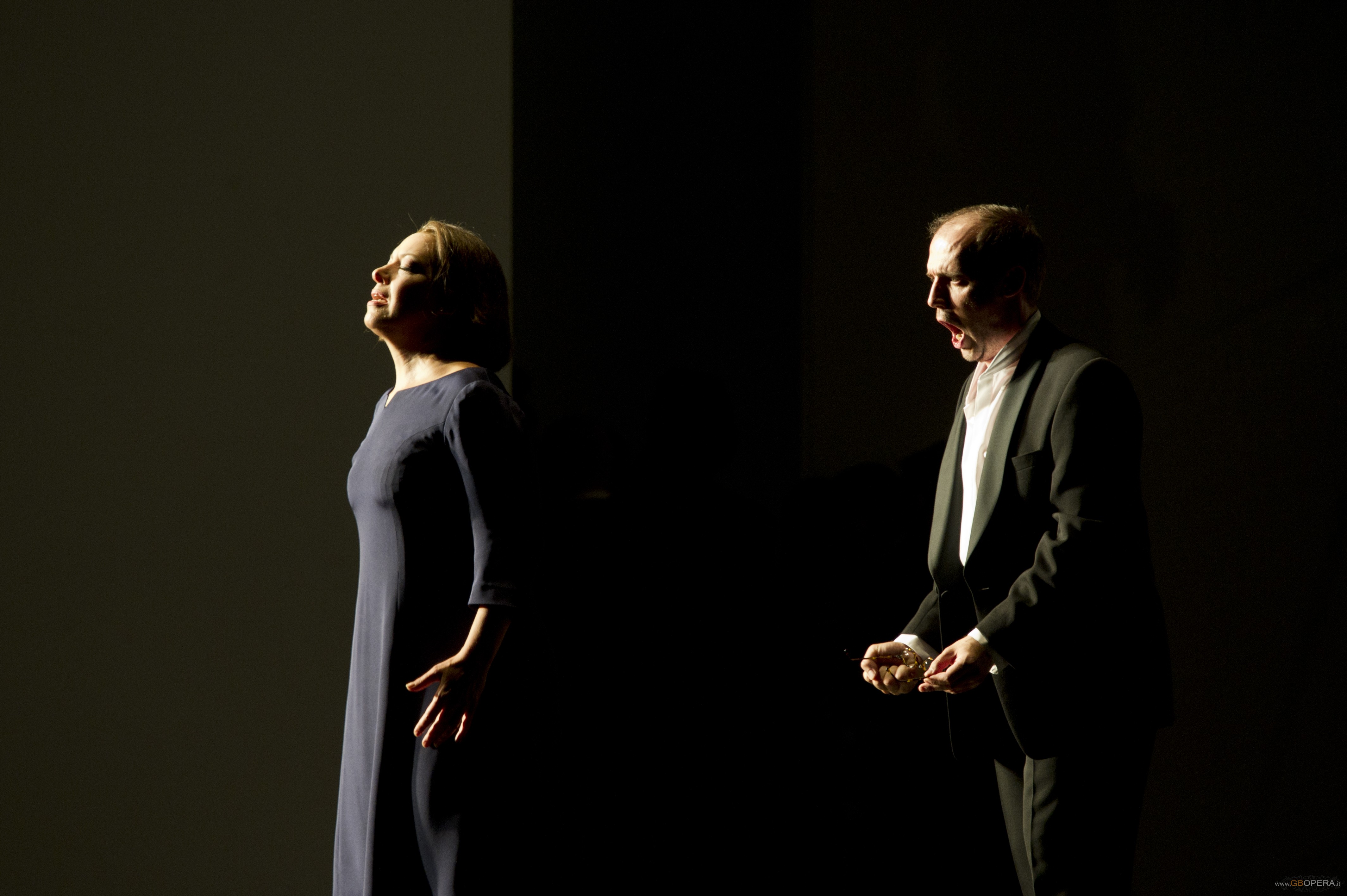 Parigi, Opéra National, Stagione Lirica 2011/12
“TANNHÄUSER”
Grande opera romantica in tre atti (versione di Parigi del 1861).
Libretto e musica di Richard Wagner
Hermann CHRISTOF FISCHESSER
Tannhäuser CHRISTOPHER VENTRIS
Wolfram von Eschenbach STÉPHANE DEGOUT
Walther von der Vogelweide STANISLAS DE BARBEYRAC
Biterolf TOMASZ KONIECZNY
Heinrich der Schreiber ERIC HUCHET
Reinmar von Zweter WOJTEK SMILEK
Elisabeth NINA STEMME
Venus SOPHIE KOCH
Paris Opera Orchestra and Chorus
Maîtrise des Hauts-de-Seine/Paris Opera Children’S Chorus
Direttore Sir Mark Elder
Maestro del Coro Patrick Marie Aubert
Regia Robert Carsen
Scene Paul Steinberg
Costumi Constance Hoffman
Luci Robert Carsen, Peter Van Praet
Coreografie Philippe Giraudeau
Cooproduzione Opéra National de Paris, Gran Teatre del Liceu di  Barcellona, Tokyo Opera Nomori.
Parigi, 6 ottobre 2011
In this striking production of Tannhäuser, a 14th century minstrel longing for inspiration, pardon and acceptance takes a quantum leap into the modern art world. Sir Mark Elder and Robert Carsen perform this tour de force in perfect tandem. As one keeps the passionate Romanticism of the musical fire burning, the other goes in search of Wagner’s contemporary relevance. They relay the composer’s major preoccupations at the time, art as religion, the establishment versus the renegade, pure love versus sexual instinct, the Apollonian and the Dionysian sides of artistic creativity, with an ease that is confounding. When the uplifting, devotional theme of the overture begins, we are initially shocked, then intrigued, by the tableau on stage: a voluptuous nude being captured, in more ways than one, by Tannhäuser and a band of artists in a studio-come-brothel in the Venusberg. There are paintings everywhere, yet none to see, for all are turned to the walls, showing only the crosses of their diagonal chassis and red stains where hands or brushes have been wiped clean. Robert Carsen uses these stained objects as symbolic leitmotifs of his own, having them later reappear as pilgrims’ crosses, knights’ shields, until one of them, in his final twist, is hung as Tannhäuser’s major opus in a modern museum devoted to other historically controversial works of art.
Though Carsen’s idea is novel, it detracts in no way from the seriousness of Wagner’s propos, nor from the beauty of his music. In fact it may even help to insulate Tannhäuser from certain clichés that still cling to the opera concerning its unfinished nature by taking its argument even further. Wagner himself revised the work on several occasions, and even admitted shortly before his death that he still owed it to the world. This production is stunningly beautiful to look at. Paul Steinberg’s monolithic but adaptable set design moves in Act 1 from the Venusberg to the Wartburg in the space of a lighting change. In Act 2, his set already evokes the mythical and the modern at the same time. There is integrity and wholeness in this production, the marks of a team who work together.
Sophie Koch (Venus) and Nina Stemme (Elisabeth), as Tannhäuser’s two poles of womanhood,  bring an immense palette of tonal color to their roles. Sophie Koch opens with the languidness of post love-making, but when she upbraids Tannhäuser for wanting to leave the Venusberg, she sings with bold metallic menace.
Nina Stemme’s entrance through the theater for “Dich, teure Halle” is brilliant. Arriving like a late spectator, she moves from left to right in her stunning white robe, her glorious tones seeking out every corner of the Bastille Opera amphitheater, giving its acoustic a dusting like I have seldom seen, never losing touch with the conductor and taking the audience by storm. Yet before curtain fall her voice has depicted all the fragility of Elisabeth’s predicament. Her prayer in Act 3, sung from a mattress on the floor, her eyes fixed on Sir Mark Elder, was a miracle of music-making.
In his complicated role, eponymous and autobiographical, holding the keys to Wagner’s own contradictions, English tenor Christopher Ventris (Tannhäuser) is admirable. Singing to each other from ramps on either side of the orchestra, his duo with Stemme was thrilling to hear, and his later, rather lengthy narrative of his failure to receive absolution from the Pope, always finely controlled and poignant. French baritone Stéphane Degout (Wolfram von Eschenbach) was a most welcome discovery and his aria, “O du, mein holder Abendstern”, a state-of-the-art demonstration of how to phrase with rubato. Such a tiny detail, but I loved the way he took off his glasses every time he declared himself to Elisabeth. No doubt Carsen’s idea, there is certainly no myopia in Degout’s voice, he sings like liquid gold.
Bass-baritone Christof Fischesser (the Landgrave) phrases with great nobility. Stanislas de Barbeyrac (Walther von der Vogelweide), Tomasz Konieczny (Biterolf), Eric Huchet (Heinrich der Schreiber) and Wojtek Smilek (Reinmar von Zweter) all deserve mention for their impeccable style. In the second scene of Act 1, when Carsen places the male septet in close formation centre stage, the effect of their vocal harmony is exhilarating. Another moment when Carsen uses stage front to great effect is when Tannhäuser is rejected after his illicit depiction of the quintessence of love: soloists and chorus twist around him vindictively, yet almost perilously, at the very edge of the orchestra pit.
A fabulous trumpet volley from members of the orchestra perched somewhere in the upper regions of the hall summoned a most impressive entrance from the Opera chorus for the Grand March. Along with the Maîtrise des Hauts-de-Seine, a children’s choir regularly called upon by the Paris Opera, their contribution to the success of this production was considerable. Laura Muller, the shepherd boy, was a breath of fresh Wartburg air at the beginning of Act 2 after the intense haranguing of Tannhäuser and Venus. The audience responded with mighty applause to this performance… and a few grumbles. Some Parisians felt unhappy about Carsen’s teleportation of a 13th century minstrel to a modern-day museum, probably the same who, forgetting that the Louvre has been a continuous work-in-progress from the 11th century, initially snubbed Pei’s 1989 glass pyramid as anachronistic. This production is a definite must for opera-lovers planning to be in Paris this year.