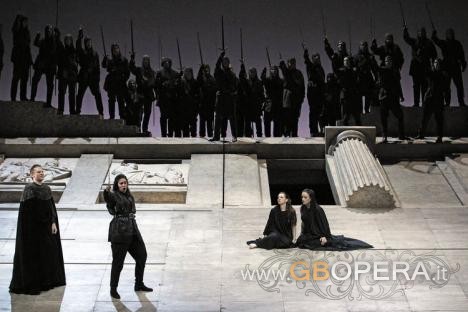 Berlino, Deutsche Oper, Stagione Lirica 2011/2012
“TANCREDI”
Melodramma eroico in due atti su libretto di Gaetano Rossi, da Tancrede di Voltaire
Musica di Gioachino Rossini
Argirio ALEXEY DOLGOV
Tancredi HADAR HALEVY
Orbazzano KRZYSZTOF  SZUMANSKI
Amenaide PATRIZIA CIOFI
Isaura CLEMENTINE MARGAINE
Roggiero HILA FAHIMA
Coro e Orchestra della Deutsche Oper di Berlino
Direttore Alberto Zedda
Maestro del Coro William Spaulding
Regia, scene e costumi Pier Luigi Pizzi ripresa da Massimo Gasparon
Allestimento del  Rossini Opera Festival
22 gennaio 2012
Alberto Zedda got his ovations before the orchestra played a note, but immediately earned it. Patrizia Ciofi on the other hand had to work hard for hers, but when it came, it was even more frenetic and as well deserved. Even more than most Rossini, Tancredi lives and dies from its singers and their ability to carry off the many vocal demands and make a glorious duet with the orchestra. Ciofi did this the whole night, from beautifully shaped and expressive recitativi, through all the forms of coloratura Rossini demands-high, low, staccato, legato–as well as a beautiful delivery of Amenaida’s plaintive cantilena lament near the beginning of the second act. Rossini wrote many high notes for his soprano, but he did not write for a high note soprano. Ciofi proved herself a Maestra of legato in all registers, and then topped it off with her last bravura aria which deservedly brought the house down. With a Maestro like Zedda, this is why people come to hear Rossini.
But where is Tancredi in all this? Unfortunately this was the question many in the audience were asking themselves. When there is only tepid applause after Di tanti palpiti, you know you’re in trouble. Not that the young Mezzo Hadar Halévy was in any particular vocal trouble, but she was vocally way out of her depth. She never had the resources either to turn on ravishing sound, spin abeautiful line, stun with machine gun like coloratura or any other bravura vocal effects. Her language was hard to understand and her Recitativi lacked form and flavor. A role like Tancredi should never be taken lightly, figuratively or literally.
As Amenaida’s father Argirio, tenor Alexey Dolgov showed a clear fresh well lined up lyric tenor voice with a good high C but one that didn’t quite fulfill the promise his voice seemed to show. Like Halévy an up and coming talent, he will be singing Pinkerton and the Duca di Mantova which seem more suited to his vocalism. While he managed the coloratura passages he did not really sing them with any verve or great accuracy, often meeting the Maestro at the high note. Not at all bad, but not really a Rossini singer.
Bass-baritone Krzysztof Szumanski, a member of the Deutsche Oper ensemble, sang Orbazzano with a strong and attractive voice, particularly effective in his fiery singing in the second act. Two other ensemble members made strong impressions with their short second act arias. Clémentine Margaine started the second act witha bang,  showin a rich mezzo voice, fine line and musical fioratura. Her enthusiastic reception could have been extraordinary with a stronger finish to the aria, but a singer of her gifts will surely solve this  in short order. As Roggiero, Hila Fahima showed excellent agilitá and a lovely silvery top registers. A sparkling debut, and perhaps someone who should pay attention to how Ms. Ciofi has developed.
The Chorus of the Deutsche Oper Berlin under William Spaulding’s superb direction, again showed that three recent “Chorus of the Year” honors were no accident. Ensemble, dynamic contrast, good language and and outstanding tenor section distinguished tonight’s performance.
Zedda,, both frail and excitable at 84, seems more like Star Wars’ Yoda than Toscanini.. Not outwardly the most elegant conductor he has been instrumental in transforming a Wagner/Strauss orchestra (and public) into one that plays Rossini with elegance and style. The Force must be with him.
Pier Luigi Pizzi’s fine neoclassical production provided an attractive and appropriate tableau on which Rossini’s dramatic pictures and situations could develop. Ably co directed by Massimo Gasparon, character and relationships were believable and clear while the costumes contributed a subtle suggestion of Greek tragedy.
The Deutsche Oper Berlin’s first ever Tancredi had it’s premiere on a cold rainy Sunday evening, but at times Rossini’s Opera Seria transported the audience far beyond the grey Berlin winter.  Pictures by Bettina Stoess – Deutsche Oper Berlin