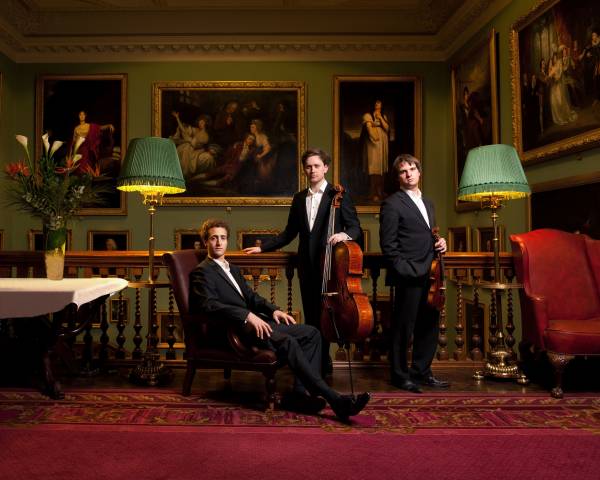 The Busch Ensemble enchanted a capacity audience at a concert  ‘Note d’augurio’on 13th December, at the Teatro Ristori, Verona, organized by Verona University and the Zinetti-Salieri International Chamber Music Competition.  The London-based trio, formed by the Dutch violinist Mathieu van Bellen, playing a magnificent Guadagnini which belonged to Adolf Busch of the famous eponymous string quartet, the English cellist Jonathan Bloxham and the Israeli pianist Omri Epstein enjoyed a resounding success at the Zinetti competition in May where they were awarded the much coveted recording prize together with the second prize. They offered a rich and challenging programme, immediately qualifying themselves by their elegant refined, playing and perfect  musical and instrumental  balance in the Haydn Trio in e major Hob.XV:28.  composed during his long and happy visit to England in the early 1790s. The mastery with which the trio presented this work with its unconventional, bachian second movement was captivating.  Haydn dedicated this trio to Therese Bartolozzi, an esteemed keyboard player and a pupil of Clementi. The original 1797 title was ‘Sonata for the piano-forte, with an accompaniment for violin and violoncello’.  The trio created the perfect balance between the solistic piano part, never dominating but always poetic, and the ‘accompanying’ discerning violin and cello parts. Despite their youth the trio displayed not only a conspicuous musical and instrumental maturity, but also a surprising ability to hold sway over the audience, managing to control the applause between movements by maintaining a calculated musical tension even in the breaks.
The Haydn was followed by the Mendelssohn Trio in D minor op.49, the first of his two piano trios, with which the trio hadso  impressed the audience in the final of the competition. The piece, in four movements is characterised by a lightness of textures, youthful and romantic melodies,a  passionate drive and a hugely demanding piano part, which the pianist Epstein executed with ease and levity. The first movement begins with telling but hushed melody in the cello part accompanied by a nervous and driven piano figuration. This opening sets the scene for the rest of the movement, which maintained its drive and passion throughout, reaching climaxes and speeds which added to the culminating effect by the end. The second movement is a perfect example of a song without words for which  Mendelssohn was so famous. One of his most touching melodies is passed between the instruments and developed with great sensitivity and refinement, which the trio rendered with great beauty and grace.  The third movement, a classic Scherzo, immediately brings to mind its counterpart movement in the composer’s well-known orchestral suite, ‘Midsummer Night’s dream’. Delightful and perfect, it brilliantly vanishes out the grasp of the listeners with a fleeting ascending scale played by the piano. Although the last movement  explores a narrow thematic range it manages to move through a considerable extension of colours and moods. Typically Mendelssohnian, it finishes on the major key with a breathtaking Coda in a virtuoso manner to match it. The trio grasped these diverse and contrasting elements rendering them perfecly, in an elegant juxtaposition.
The second part of the programme began with the beautiful Notturne Op.148 by Schubert which alternates the still and sustained opening and closing sections  with the noble and affermative middle section. The trio took full advantage of the marvellous acoustics of the Teatro Ristori passing from intense pianissimi to full- bodied forte, exploiting the dynamic contrast to its full, and creating an atmosphere of breathtaking beauty which left the audience spell-bound.  In the magnificent Schumann Trio Op. 63, which followed, all the artistic characteristics that the  trio had  displayed in the previous pieces were given full vent.  Freed from a visual dependency on their scores, with an exceptional equilibrium between the parts,  timbric and dynamic richness and  contrast, a passionate lyricism, an authoritative rhythmic framework, and a calibrated pacing of the  phrasing, the trio presented an intense and poetic performance.  Their complementary  individual qualities, the burnished tone of van Beulen, the lyricism of Bloxham and the fluidity of Epstein, together with their technical and musical excellence, collocate them in an auspicious position for a radiant career. An enthusiastic audience, undaunted by the late hour, was rewarded with a  rousing and festive Rondo all’Ongarese; the third movement  from Haydn’s Piano Trio n°1 in G major.