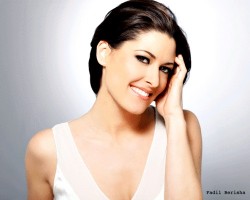 The American mezzo soprano Kate Aldric has performed in the main worldwide theatres such as the Metropolitan Opera, San Francisco Opera, Teatro Colón in Buenos Aires, the Hamburg State Opera and the Deutsche Oper am Rhein in Düsseldorf, Germany, Teatro Regio of Torino and many others. She recently gave birth to a child. Her roles include Carmen, Antoine Mariotte’s Salome, Octavian in Der Rosenkavalier, Cesare and Sesto in Giulio Cesare, Isabella in L’italiana in Algeri, Rosina in Il barbiere di Siviglia, Angelina in La Cenerentola, Arsace in Semiramide and Fenena in Nabucco, among the others.
Aldrich rose to international fame in 2002 through her starring role in the Zeffirelli production of Aida. That same year she won the CulturArte Award at the Operalia International Opera Competition, in 2006 she won the Alfréd Radok Award and the Thalia Award in the Czech Republic. For more information on her singing activity, please visit her official webiste.