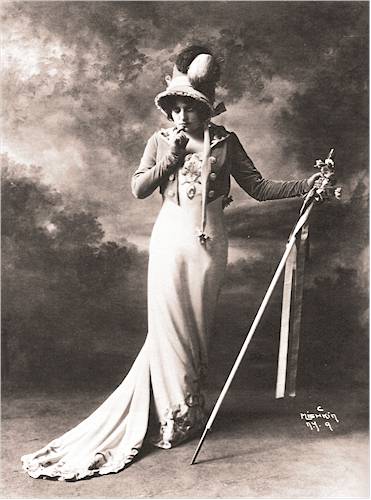 Growing up in my house you were sure of two things. You would be constantly on the move, and you would always hear music.  The voice that brought my Mother to a reverent standstill was the shattering truth in the sound of the voice of Claudia Muzio.  My mother would actually work with many of Muzio’s maestri, including Refice, who had written so many things for her, but especially the divine sacred opera  “Cecilia”  based on the life of the patron Saint of Music.
I will be forever in awe of my Mother;  she was an amazing charismatic and searing actress and would be vocally reminiscent of Muzio  as well without being a copy. They both imbued in the words a almost mystical truth, a very immediate quality, as if the word was being thought of and lived at that very second for the very first time!
Anyone who studies voice should know about La Muzio. She influenced many singers who admired her greatly, two of my great favorites and divine voices, Rosa Ponselle and Renata Tebaldi adored and revered her.  They were a trinity of voices that formed everything I am today.  Mom, Dad and Callas were the second Triad.
Muzio  grew up as I did in a musical family and her father worked in Italy and London as a stage director and her mom was a chorister.  I always felt a kinship with her and a devotion if I must be honest.  She comes into my life at the oddest times, and is always most welcome.  Her coming is most often associated with a time in my life where I have lost my joy in music, or feel lost spiritually.  The minute I hear her search and her successful, often triumphant findings, I am renewed.

There is so little in the life of a singer that renews your heart and soul.  So much is about giving and giving….to God first, to the public, to your colleagues, to your adoring fans and also to your detractors.  Seldom does something give back.  I am refreshed when I hear great souls laboring under all life can do to someone, and despite that continue to bring to the public in that  brief moment of connection a rare jewel of emotion and expression, truth, perhaps a hint of paradise…..
In homage to her I will share my feelings about several pieces she has engraved on my soul. The first is unequalled in my mind. Violetta, last act, Verdi’s masterpiece, La Traviata. La Muzio revels in this glorious final act of Verdi’s great masterpiece, “La Traviata”.
This role has been sung well by many great stars, but here for me is one of the greatest and most haunting readings of this recitative and aria you will ever hear.
In a total concentration of talent and pure magic, Muzio so identifies with the doomed courtesan that she becomes her in the kind of performance that transcends the medium. Not just notes, but pieces of herself that are breaking off as melodious fragments of a life and soul coming to an end. A sick and breathless quality to the famous reading of the letter hauntingly confirms from the very beginning the nearness of death and hopelessness and as we are taken deeper into her world coming to a end, the heartbreak is almost unbearable. Exactly what Verdi begged for in his genius melodies and text, a living emotion in sound and words.

Muzio is a vivid example of a type of expression that used to be demanded of singers.… the orchestra becomes an extension of her and not just music, she uses the entire piece to weave a spell transporting us all to this final moment in a life ultimately trasnfigured by the power of love. This one could scar you for life! An expressive and magnificent artist, who has it all.
Famed Italian tenor Giacomo Lauri-Volpi, in his incredible books about music and philosophy , specifically in his book about the singers of his day,
“Le voci parallele” spoke about Muzio and describes Muzio’s sound as a voice full of “tears and sighs”- she has long been an example of what opera can be about when it is not just someone singing notes of music, but using them to convey the deepest emotions of not just the singer, but all of us.
This selection is a melody written by her great friend and admirer, Lincinio Refice (1885-1954), a priest that wrote many pieces for Muzio, one most famously being his sacred opera “Cecilia”, and this little beauty,  Ombra di Nube…..In its brevity, Ombra di nube is a concentration of noble and tormented mysticism.
He wanted someone with God in their throat…….. He got one.
The words in Italian:
Era il ciel un arco azzurro di fulgor
chiara luce si versava nel mio cuor.
Ombra di nube, non mi offuscare,
della vita non velarmi la beltà.
Vola o nube, vola via da me lontan;
sia disperso questo mio tormento arcan.
Ancora luce, ancora azzurro!
Il sereno vegga per leternità!

Not a casual hearing from her ever. This woman involves you from the very first note. Heartbreaking, full of an emotion that she never really apologizes for. Should she? NO!
These words have always had a double meaning for me.  So appropo of today’s “use and lose” philosophy- this is all that is beauty all that is intangible truth, begging not to be cast aside. But it also speaks on a personal level,  of a human desire not to be put aside, left behind, a hope for one’s sun  never to set.
The line that often brings me to tears is, “Ombra di mube, non mi offuscare della vita non velarmi la belta‘”. Isn’t that everyone’s hope in life? Especially those of us who have served in music and been arrested by it’s beauty.
Followed by the words, which we all have wished at one time or another in our own lives, pleading that all clouds depart from her. flying far away and taking with it an old torment.
As I believe she is praying at the end of her life, as will I,  -Cecilia dying  sees “abissi di luce, oceans of light”-…. so here Refice recalls in this prayer  as well, “Ancora luce, ancora azzurro….. il sereno vegga per l’eternita!”  “Still there is light, still there is blue….(skies) a serene vision for eternity!”
As she lay down her struggles and victories, her joys, loves and pain in Rome, one mysterious night in May, 1936….. could she have imagined the emotion and the exultation she still inspires in all who listen to and are transfigured by her voice to this very day?  I hope so.  I KNOW so.
Brava, Divina Claudia.  You came into my life pouring water on a parched soul and up from me sprang a flower of great dimension and possibility.
Thank you to my Mother, another thing to be grateful to you for, dear Mamma, for bringing this incandescence into my world….. you are both together now, a part of all that is God, beauty and Light!