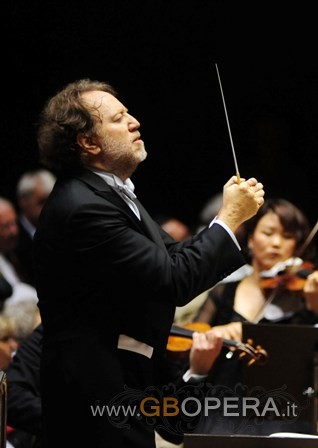 Beethoven’s own relentless commitment to a sense of drive and inevitability in his music, constantly rewriting and altering passages, sometimes choosing to discard far more material than he used, is as well documented as the constraints with which he had to cope, from hardship to deafness. The directness of his message is served by performers like Riccardo Chailly and the Gewandhaus, able and willing to make the same commitment.
Their Beethoven was electrifying. Taking Beethoven’s indications and sometimes hallucinating metronome marks as gospel, Chailly takes risks which redefine the nature of musical performance. Not only does his unfailing pulse provide continuity of line, it also recaptures the admirable simplicity of Beethoven, helping us to recognize structural detail by consistently navigating us through seeming contradictions in the writing.  With Chailly, tempi relate both within and beyond movements. When, for example, in the opening 3/4 Adagio of Symphony nº 2, he keeps the pulse forward moving until the arrival of the 2/2 Allegro con brio that follows, the entire symphony gains in clarity, shape and texture. Breathlessly fast, filigree piano phrases in strings and winds seem to last forever, before slipping down a notch to pianissimo, and then even lower, on their way to climaxes that are unavoidable, and unforgettable. Members of the Gewandhausorchester, all totally responsive, committed players, in accepting Chailly’s challenge to avoid the temptation to indulge, give the performance of a lifetime, one that redefines the relevance of Beethoven to today.
Ritratto di musico [Portrait of a musician] by Italian composer Carlo Boccadoro, the first cotemporary work of the series and given before the 5th Symphony, was a big success. Boccadoro says “without a profound knowledge of musical tradition, it is absolutely impossible to create something new, something different”. In Ritratto di musico he writes a new fifteen minute piece that is very exciting rhythmically. It almost sounded almost like a concerto for the timpanist. There were other overtones of musical history, past and present, along with his quotes from Beethoven’s 5th. Before the end a fabulous decrescendo into silence followed with hushed strings and a remarkable horn solo. A most imaginative work that was very warmly received. After the interval, presumably for the Boccadoro (now there was a significant percussion section), Riccardo Chailly had reorganized the disposition of the orchestra. Double basses to the left, violins right across the front of the stage with cellos and violas behind, woodwinds and tympani central, horns to the left, other brass to the right. From then on, this orchestral formation would be maintained until the end of the whole series, creating new connections within its ranks and acoustic bliss within the hall. The 5th Symphony sounded like never before. The first movement constantly returned to a unique tempo that gave it rebound and buoyancy. Divided across the front of the stage, first and second violins were conversing in stereo. The timpanist, placed directly in front of Chailly with even a slight separation through the orchestra, looked like an extension of Chailly’s left hand. Positioned by the cellos and the double basses, the piccolo topped their fundamentals right to the final chord. Strings could even challenge brass.
Chailly left an immense silence before beginning the Andante con moto. Here again, his tempo so espoused the musical material, it was perfection. The 32nd notes present in the opening theme could be heard evolving into a life of their own. In the fugal trio of the third movement the cellos cascaded in forte detached notes like machine-gun fire, making the attacca eruption of the final Allegro an inevitable conclusion.  The audience was ecstatic.