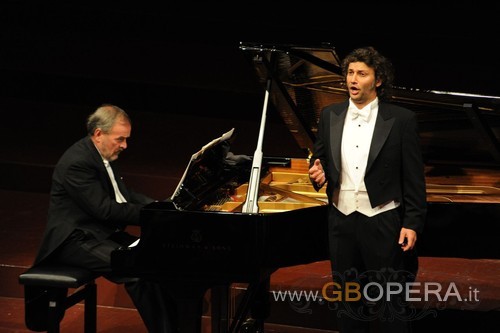 Berlino, Berliner Philharmonie
“LIEDERABENDS”
Tenore, Jonas Kaufmann
Pianoforte, Helmut Deutsch
Franz Liszt: Vergiftet sind meine Lieder, Im Rhein, im schönen Strome, Freudvoll und leidvoll, Der König von Thule, Ihr Glocken von Marling, Die drei Zigeuner.
Gustav Mahler: Rückert Lieder.
Henri Duparc: L’Invitation au voyage, Phidylé, Le Manoir de Rosemonde, Chanson triste, La Vie antérieure.
Richard Strauss: Schlechtes Wetter, Schön sind, doch kalt die Himmelsterne, Befreit, Junggesellenschwur, Wie sollten wir geheim sie halten.
Berlino, 17 febbraio 2012
In this day of operatic “Products” Jonas Kaufmann is more than the ”next great … ”, and it can be hoped that thanks in part to him the phrase “the next Pavarotti” will soon be retired. Like great singers before him he has (with the help of many great people and good luck) manufactured himself. Unlike the prepackaged Pavarotti’s and instead like artists of an earlier time he is showing that great singing comes in many forms and styles. He amply and generously demonstrated this in Berlin in the third of four Liederabende which began in Vienna Feb. 13 and ends in Paris Feb. 20. Clearly a man who loves to sing and sings extraordinarily well Kaufmann delivered a first rate program with stunning moments and then proceeded to sing eight encores to the ecstatic public. In addition to the flowers thrown onto the stage he was also fèted with the newest operatic tribute-little fluffy stuffed toys! The concert itself was an interesting evening of songs often not associated with a tenor, most notably Mahler’s Rückertlieder. Partnered, not accompanied, by his longtime collaborator and teacher Helmut Deutsch, Kaufmann first explored six interesting Liszt pieces which included Heine texts famously set by Schumann. Interesting vocally and a good starter for the singer, they provided a wonderful pianistic opportunity for Deutsch, who displayed a perfectly balanced virtuosity within the songs. Mahler’s 5 songs based on the poems of Rückert, are usually sung by an opulent female voice with orchestra. As vastly different as these songs sound in the tenor voice Kaufmann managed to bring all of them off despite, or perhaps because of their technical demands. His wide palette of vocal colorings and absolute mastery of dynamics had it’s peak in Ich bin der Welt abhanden gekommen, where Kaufmann’s use of messa-di-voce shadings and atmosphere blended perfectly with the needs of the song and had the audience in the 2440 seat hall spellbound. Deutsch’s wonderful playing made one not care about an orchestra.
Kaufmann is not a ‘Lieder singer’ in the sense that the music comes alive through and with the delivery of the text. He is an enormously musical singer who uses marvelously graded dynamics with a noble voice, rich in the middle and untiring and consistent on top. Most reminiscent of Ramon Vinay, the squillo is not Italianate, and although he has tremendous line and long phrases Italiante legate and portamenti are not features of his singing. He does employ Italianate emotional gestures effectively.
Interestingly, the Duparc songs which opened the second half of the concert brought out the best in his voice, the language bringing a bright shine onto the dark timbred sound. Of these lovely songs, Chanson Triste was magical, best suited to his expressive dynamics. His absolutely seamless use of head voice, messa-di-voce, piani and his ability to go in either direction from pianississimo to forte sometimes seems a bit overused, but was never just a technical trick.
Kaufman and Deutsch finished the concert ‘at home‘ with six Strauss pieces, the first of which, Schlechtes Wetter, charmed the audience with it’s witty delivery of the text. After that it was the vocally demanding Strauss songs written for soprano, and after a long evening Kaufmann sailed through them, showing that he could sing full throated sustained high lines.  Befreit was beautiful and moving, as it should be, Morgen a pianissimo tour-de-force, though perhaps monochromatic, and Cäcilie a fitting climax with a ringing high note.
A long and demanding evening, certainly satisfactory for most mortals, but mortality is not what great singing is about, and Mr. Kaufmann showed no signs of wanting  to stop. He sang six more Strauss Lieder, among them Zueignung, and then launched into Lehár, giving the public some of Operetta’s greatest hits which they hadn’t heard so well sung for at least thirty years. He had to read his last piece, Gern hab’ ich die Frau’n geküsst  from the music at the Piano, and undoubtedly stopped only because he had no other music. It was a generous evening on al fronts.