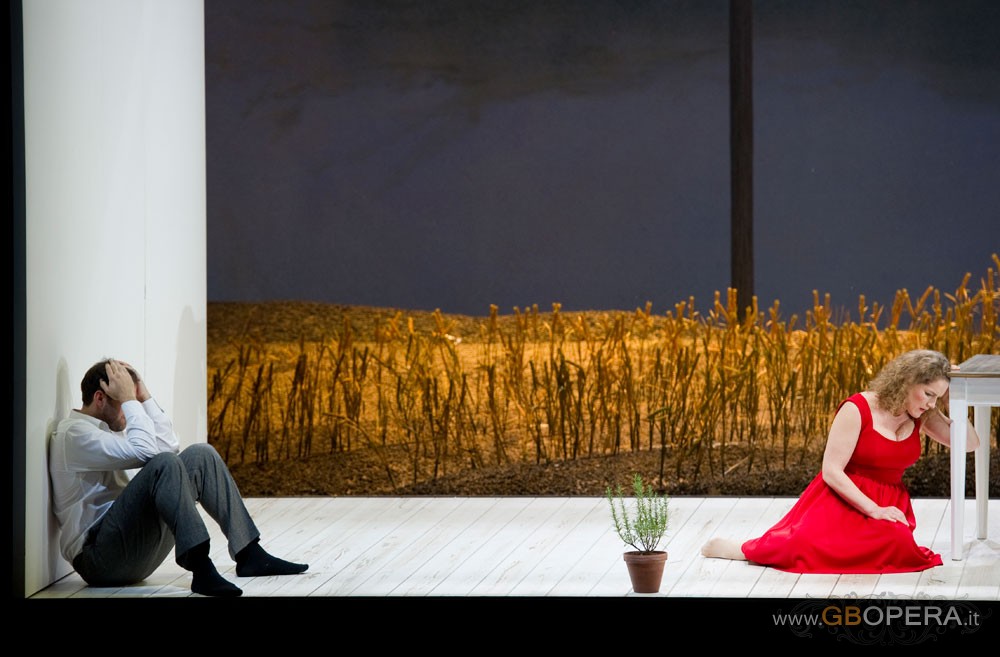 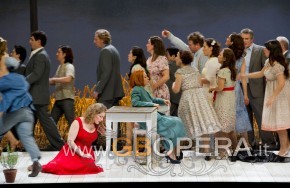 The Deutsche Oper Berlin presented a magnificently simple clear and powerful Jenufa under the combined direction of Donald Runnicles and Christof Loy tonight. The evening featured fine singing and a wonderfully balanced ensemble performance of committed, well drawn characters on a stage which cinematically framed the actions clearly delineating character and situation. The spare set, enlivened by evocative modern costumes, allowed for strong movement and well choreographed mass scenes. Donald Runnicle’s clear and musicianly rendering of the score brought Janecek’s complicated distinctive music to vivid and comprehensible life with beautiful structure, clarity and outstanding stage-pit coordination while always drawing out  the emotional and dramatic content of the music. 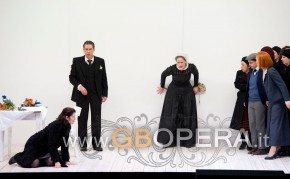 Loy emphasized the pictographic by opening each act to a silent stage to establish his scene. At the start, Jenufa’s stepmother the Kostelnicka (Jennifer Larmore) who drives the most important actions in the opera, enters the box-set room from the back with a suitcase which she sets down, then stands pensively near a wall until the music starts. The back and side walls move and open to allow more room and characters but the action is always framed, very often looking like a modern 16:9 movie screen. The characters stand out on the the almost bare but by no means uninteresting set, so their purposeful movements and physical interactions tell us much of what is happening.
All the performers were first rate, and yet except for Hanna Schwarz, no voice stood out. Michaela Kaune as Jenufa has warm beautiful sound and a moving vulnerability but the voice was never heart-wrenching or transcendent. 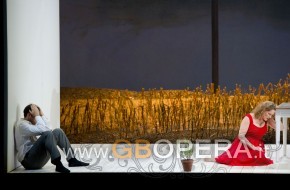 Jennifer Larmore, a superb bel-canto singer now moving into a wider range of roles, didn’t have enough Slavic  chest-voice to always carry over the orchestra. She is a committed and dynamic performer and convincingly stretched her technique to the limit in the climactic scene before the Kostelnicka murders Jenufa’s infant child..Will Hartmann as Laca, who along with Schwarz had the best success with the public, has a very attractive bright tenor voice, with an excellent, if sometimes pinched top. His stage presence is equally sympathetic, although the intense jealous frustration which drives Laca to slash Jenufa’s face with his sharpened knife was not evident. Joseph Kaiser as his older half-brother Steva looked the part, though having less voice than Laca vitiated the character’s boorish crudity. In contrast, when Hanna Schwarz sang there was a palpable reaction in the audience. The role of the Grandmother is short but strong and the contrast between Schwarz’s deep resonance and visceral vocal presence, and the rest of the cast was striking. 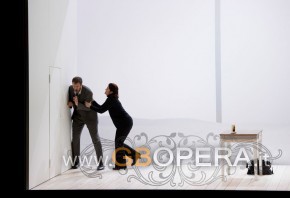 Perhaps both chance and choice played into this.  Both Ms. Larmore and Ms. Kaune suffered during rehearsals from the a nasty bronchial cold. This may have deprived Kaune of that ultimate fullness of voice and expression particularly at the end of the evening. With Larmore, who showed no signs of malaise but was assaying her first Kostelnicka, it may have led to the surprising appearance of Nadine Secunde in the minor role of the Mayor’s Wife, since she has already performed the Kostelnicka. Loy, by deemphasizing the dark folkloric elements of the evil stepmother, drunken womanizer and bloody jealousy has chosen to tell a more modern story and enabled his fine cast to convincingly enact a human and approachable drama, but does he sacrifice the visceral and incandescent in the process?. Does Hanna Schwarz’s powerful voice give a clue, and would such a performance be possible with a cast of voices all like hers? Loy, on his Website talks about the emotional resonance that only singing communicates but would  the demands of such vocal expression be in balance with the way Loy frames the drama? Unanswerable questions until we clone Corelli, Jurinac, Simionato and the like, but there is no question that in Berlin Loy, Runnicles and an excellent cast have brought Jenufa to life.