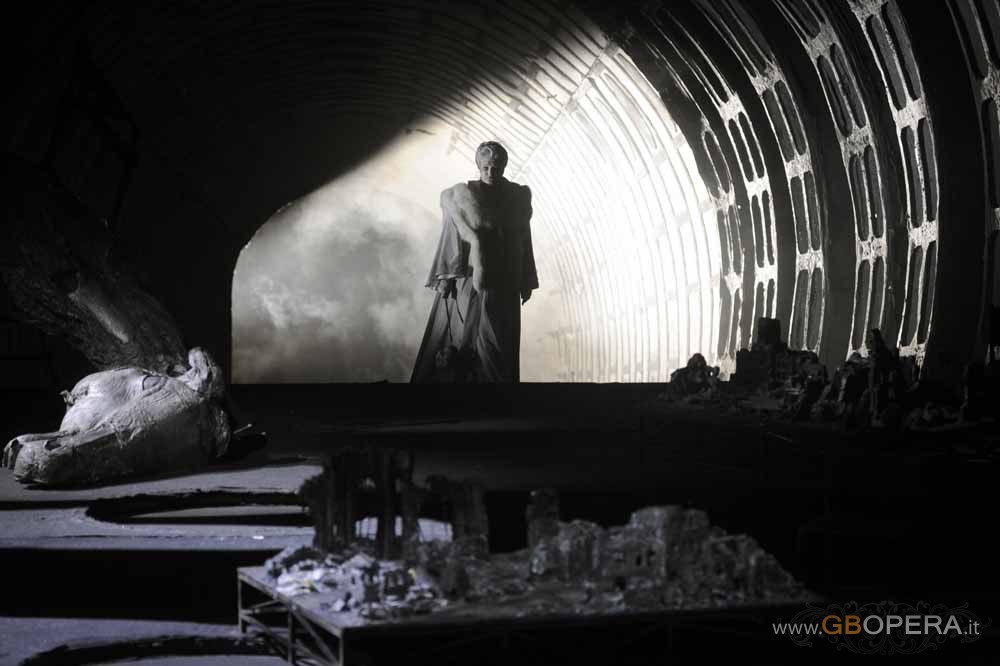 In this time of possible Euro-dämmerung, one hopes that it isn’t a bad omen that Berlin had Üthe highest concentration of Valkyries on the planet with Simon Rattle and the Berlin Philharmonic performing a concert version followed the next day by Götz Friedrich’s classic staging at the Deutsche Oper Berlin. Less than two months after the Staatsoper also visited Valhalla just a kilometer down the road, even dedicated Wagner fans may have heard one too many Hojo-to-ho’s, and tickets for the Deutsche Oper performances May 25 and 28 were in abundant supply. But those dedicated or fortunate enough to attend were richly rewarded with a uniformly fine and often superb performance which without pretense presented Wagner’s evocative and moving epic with such a fine balance of all elements as to embody his idea of Gesamtkunstwerk not as a concept, but as enthralling theater.

This was an evening where the emergence of a major young singer (Heidi Melton as Sieglinde) or a stunning well sung and powerful Wotan (Greer Grimsley) did not distract from the grandeur and depth of the storytelling. Even after 28 years Götz Friedrich’s time-tunnel set transports us to “A long time ago, in a galaxy far, far away” to tell us of immense forces acting on and interacting  with humans and gods.alike. Evocative lighting and huge perspectives serve to accentuate the character whose actions they frame.
The Deutsch Oper Orchester led by Donald Runnicles provided a rich and unifying tapestry for the drama, not making sounds or playing Leitmotif’s for their own sake, but remaining always magnificently focused on the piece as a whole. A remarkably balanced and integrated sound without self-indulgent

dynamics or tempi. Like the orchestra the singers were remarkable individually yet blended seamlessly. Greer Grimsley, imposing physically and vocally portrayed Wotan’s power as well as his pathos, and had the voice, stamina and technique to deliver a beautiful piano monologue at the end of the evening. Heidi Melton, who started at the Deutsche Oper Berlin several years ago as an apprentice and returns after a stint at Karlsruhe sang an extraordinary Sieglinde. A rich voice with enormous bloom on top she soared with the orchestra through Wagner’s biggest phrases, and handled the difficult low tessitura of the role extremely well, despite the youth of the voice. This is a performer and singer of huge potential who is already at home in demanding repertoire. Her partner, tenor Torsten Kerl is a singer of musical and vocal intelligence, He unerringly chose when to emphasize text or vocal color and mustered sufficient power for the climactic moments. Somewhat overpowered by his sister, he is nonetheless a fine Siegmund.  Attila Jun had the vocal and physical stature and understanding of the role to dominate crudely and effectively. Daniela Sindram’s strong and remarkably consistent mezzo and stage presence  gave us a convincing Fricka who could stand up to Wotan and even bend him to her will. She too had a very well deserved success. Catherine Foster, a warm voiced and sympathetic Brunnhilde, sometimes seemed like she could give more, but sang a beautiful monologue in the third act and had a good success as well in this touchstone role.  It is a tribute not just to Götz Friedrich’s original production but to the theater and Assistant Director Gerlinde Pelkowski that a production which might have been a pale reflection of the original from 28 years ago becomes as vibrant as a first night. Foto © Bettina Stöß