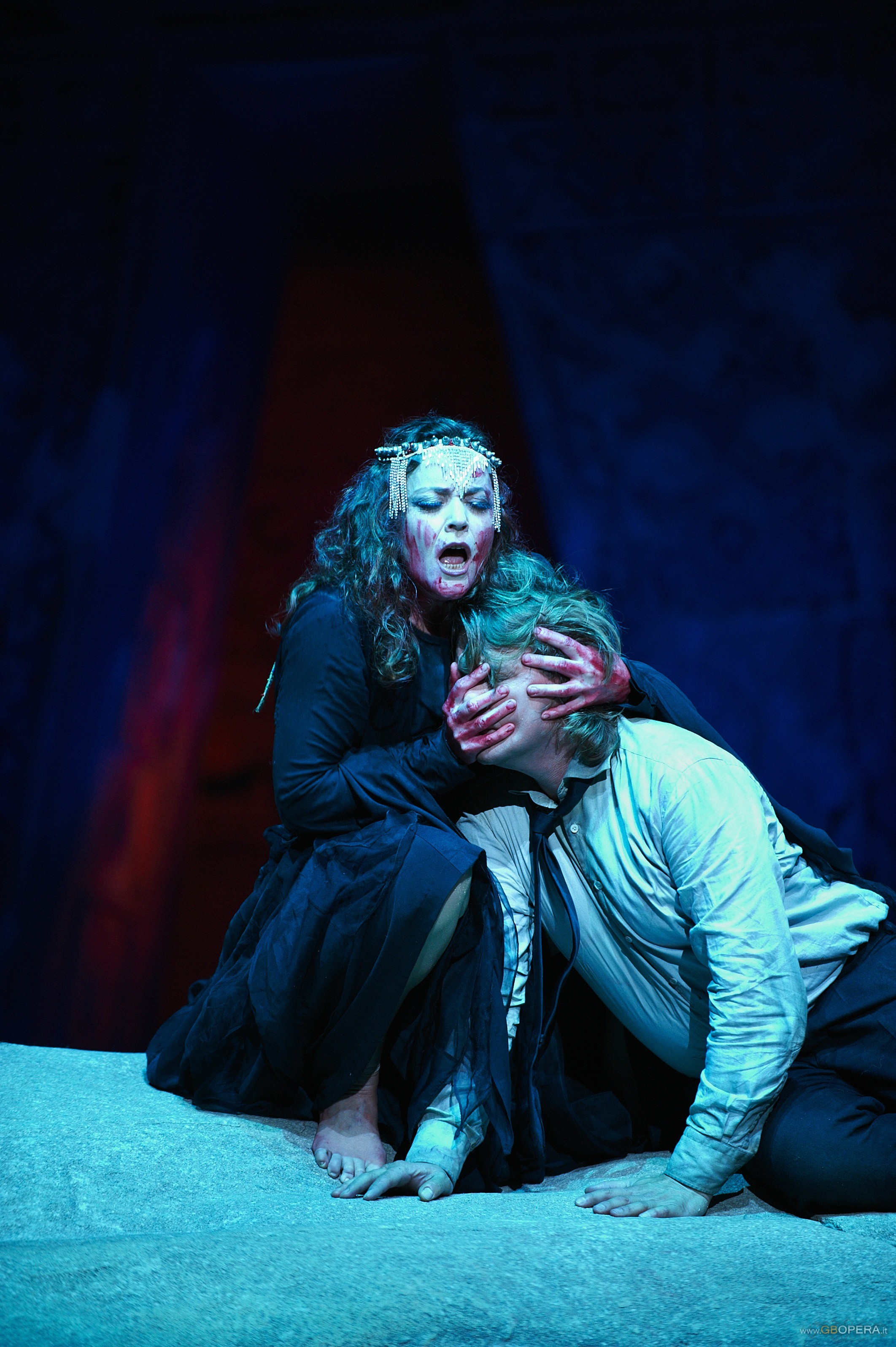 While writing may require 99% perspiration and1% inspiration it is the latter which is literally and figuratively essential to opera and results in a vastly different equation. Perhaps more than any opera in the repertoire Parsifal succeeds or fails on inspiration and unfortunately this was precisely the quality lacking in the major new production which debuted Oct. 21 at the DEutsche Oper Berlin.
This tale of the inspired Fool who ultimately revitalizes and transforms into the the kingly godhead of the Order of the Grail succeeds only when the audience is transported on this journey and experiences Parsifals spiritual awakening and fulfillment and the compassionate release it provides from the wounds and curses of sin. Otherwise it is a very long evening, and perspiration far outweighs inspiration as it did Sunday in Berlin.
At the end the passionate and knowledgable Berlin public blamed director Philipp Stölz and his team but inspiration can spring from many sources and neither GMD Donald Runnicles who just signed a contract extension through 2018, nor the performers onstage provided sustained elevation. The DOB orchestra showed some minor initial nervousness perhaps thrown off stride by the 15 minute delay caused by a stage machinery malfunction but despite their rich sound and fine balance gave a soulless account of Wagner’s last score under Runnicles direction.
Perhaps because of circumstance or choice there were three major cast changes in the last weeks of rehearsal: Matti Salminen replaced Liang Li as Gurnemanz, and changes were made for Amfortas and Klingsor as well. Salminen may not be at his peak where he could dominate an orchestra and performance throughout but he still has the voice and power for climactic moments as well as line, refined vocal sense and crafted diction. As much of a miracle as it is that he still sings so well, Salminen’s touch alone was not miraculous enough to give life to the production.
Stölzl has promoted Madonna, as well as Pavarotti, and Mick Jagger but could not quite manage Parsifal. Framing the protagonists who were dressed in mixed era costumes meant to convey timelessness, with a beautifully constructed an lighted Medieval Montsalvat, he moved the choruses and groups of seductively sung Blumenmädchen well but failed to establish strong character interaction or conflict. Thus even Salminen was was left to his still considerable devices to tell his story, as were the others, and little dramatic tensionresulted. The major exception came with Klingsor’s Act II confrontation with Kundry, where Thomas Jesatko‘s strong dark voice and drama driven diction drew sparks from the strong voiced and intense Evelyn Herlitzius. Ms. Herlitzius’ penetrating and in all registers fully present voice, seemed a bit wider than usual, presumedly because of the demands of this crossover mezzo/soprano role and she lacked the sustained A’s, B flats and B natural in the murderously difficult climactic Act II duet with Parsifal. Her committed Kundry was richly rewarded by the public.
Klaus Florian Vogt, with his blond locks and good physique looks the part of the German Heldentenor. His is a sweet voice with a tight and penetrating vocal technique which is a hallmark of the Mozartian or Character Tenor who develop into the Helden repertoire. Vogt had some moments when he showed volume in the top register and his Lieder like approach had it’s moments as well, but the lack of sustained vocal intensity and weight in the middle and upper middle robs the music of the power to transport the audience to the higher realms Parsifal achieves.
Thomas Johannes Mayer‘s warm, sympathetic baritone showed some signs of a wobble in Amfortas’ anguished passages but his late entry into the production and position high on a ledge may have contributed to the the strain. Albert Pesendorfer dark yet slender Bass made the perfect Titurel. Burkhard Ulrich was a ‘Luxus’ Erster Grafritter and all the smaller roles were ably filled by members of the ensemble as well as several from the Berlin and New York young singer programs of the Deutsche Oper Berlin.
The remarkable DOB chorus, led by Thomas Spaulding did provide magical offstage choruses, beautifully balanced and calibrated in the vast backstage areas. These heavenly moments were indeed inspiring but only served to highlight what we were missing onstage. Photo Matthias Baus © Deutsche Oper Berlin