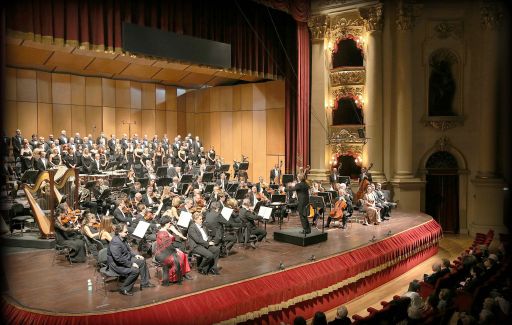 It would have been very difficult for a spectator to associate the concert performance of  Aida on Friday evening  at the Filarmonico with a performance by the world famous company and symbol of Italian opera, the Arena di Verona. What had been heralded a year ago  as the grand opening to the centenary celebrations of the first opera, in what was to become the summer festival season, in the Arena, was down-graded to a prize-winners awards performance of a singing competition  created specifically for roles in Aida. The original planned production(still advertized on theVeneto Region site, and on Carnet Verona, the site of events in Verona ) was to have been staged, produced and directed by the renowned and refined Hugo de Ana.  None of all this. In a semi-deserted theatre, the evening was decidely low-key: from the bare stage, (not even a flower, an Egyptian decoration, a palm frond!), where the orchestra and chorus acquitted themselves with professionalism,  to the awkward stage presence of most of the singers. Aida is a formidable challenge to even experienced singers but deprived of scenery, costumes and acting, it becomes a very arduous task. The two singers who managed to surmount these difficulties more successfully were, the Aida, soprano France Dariz and the King, the bass Desaret Lika.  Statuesque and composed,  a strong and beautiful vocal quality, secure in her technique, France Dariz allowed her voice to act for her.  If at first , her low register seemed weak and her diction lacked weight, as the evening progressed her performance strengthened, and her lustrous, unwavering top notes  consisently soaring and rounded, were never tired or pushed.  This was matched by her clean articulation and  ability both to diminish and augment the dynamics of high sustained notes, which added pathos and expressivity  to her phrasing.  She was  generous in the ensembles with ringing, full-bodied top notes often doubled by the chorus. With further experience and a fine-tuning of her vocality,  the quality of her strong, beautiful  voice  and her overall performance can only mature.
The bass, Desaret Lika sang the role of the king with ease, and his confident stage presence and an even and controlled voice lent dignity and regality to the ensemble.  The pleasing and cultivated voice of the baritone, Davit Babayants, Amonasro, was  smooth and mellow, but lacking in the incisiveness and vigour necessary to express the intensity and drama of his role.  The Ramfis  of Seung Pil Choi was marred by an oscillating vibrato and a tendency to push the voice, perhaps due to nervousness. The mezzo soprano, Elena Serra as Amneris swept along by the passionate and intense role, bestowed a minimum of dramatization to the evening  This was most successful in the declamatory episodes in her lower register.  The role was presented with great zeal and involvement but the voice, especially in the centre was often unfocused and uncontrolled with a disturbingly wide and fluctuating vibrato.  The tenor Zvetan Michailov, not a competitor in the competition, but a singer of wide experience, nonetheless sustained the impervious role with difficulty. His opening Celeste Aida was tight and nervous due to evident apprehension., which was not helped by his manner of pushing the voice rather than sustaining it with his breath. The overall resulting effect was a fitfulness  lacking in line and phrasing.  The two other roles not included in the competition, the priestess, sung off-stage by Chiara Fracasso, in a clear, strong voice,  and the messenger sung by, Enzo Peroni with a secure and commensurate delivery, were more than decorous.
The experienced conductor,  Fabio Mastrangelo, with an elegant and secure gesture mainly devoted his attention  to the orchestra with the singers placed behind him. Many were the times when the orchestra and soloists were not together. With the orchestra, chorus and soloists massed together, more contrast could have been produced between the different groups to create a spatial dimension musically, necessary to a coherent reading, and to create the atmosphere missing due to the lack of  staging but inherent in the music.   The orientalizing melodies of the flutes  in the Sacred Dance of the Priestesses at the end of Act 1, for instance(especially given that there was no dance and no priestesses) could have been a highlighted and allowed a more sinuous movement. The sound quality in the grave sections of the strings resulted thin in their solistic moments in the fourth act and could have been reinforced. In this situation the orchestra is called on throughout the opera to fill voids and substitute the staging which is an integral part of the score.. The leaflets distributed by protesting, apparently resigned theatre workers to the audience at the entrance,  indicate that the Fondazione Arena di Verona is facing  difficult and serious times. Photo Ennevi / Fondazione Arena