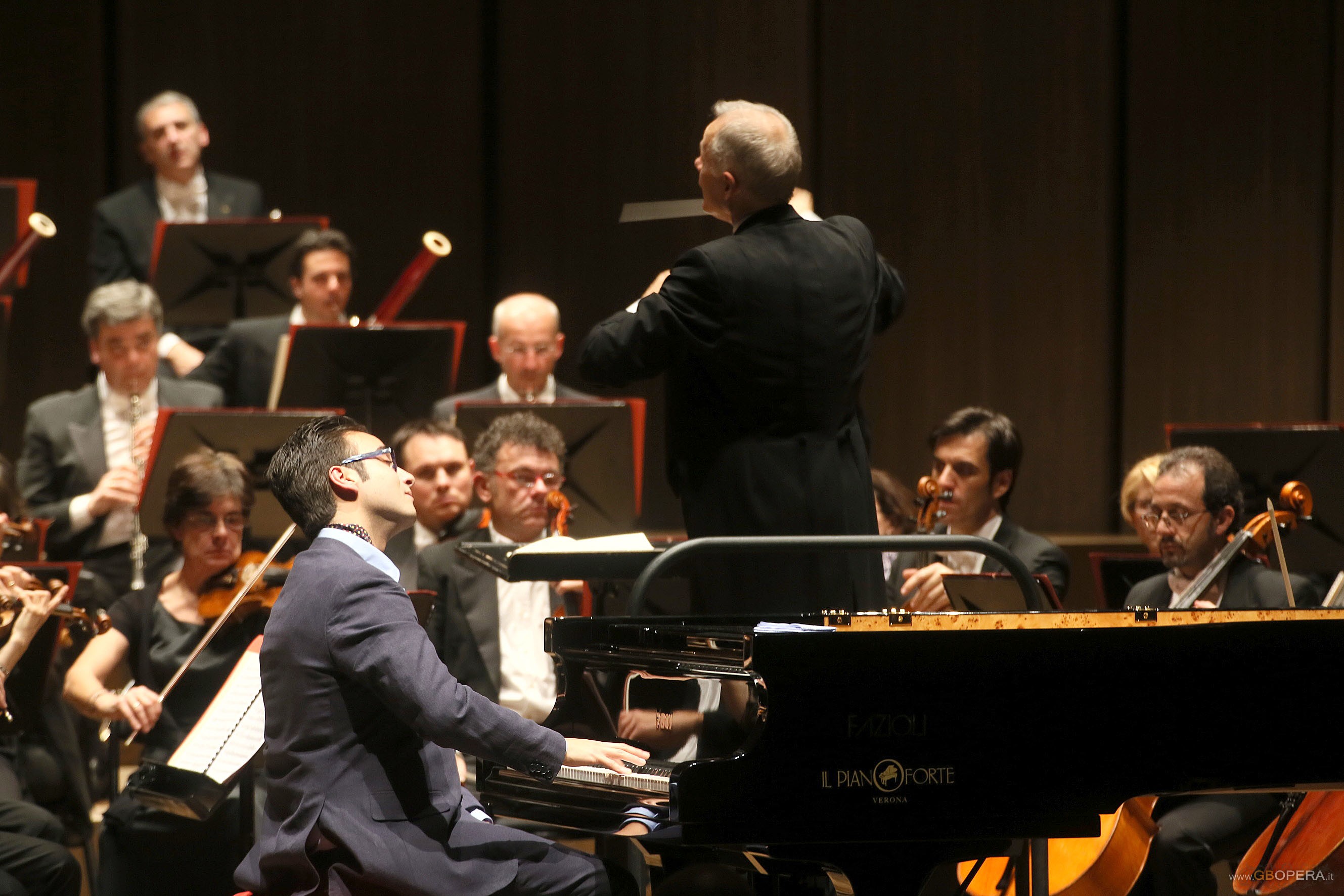 The Classical Viennese School at the Teatro Ristori

Verona, Teatro Ristori, Stagione Sinfonica 2012/2013 della Fondazione Arena
Orchestra dell’Arena di Verona
Direttore Ola Rudner
Pianorforte Andrè Gallo
Ludwig van Beethoven: “Coriolano” Ouverture in do minore op.62
Wolfgang Amadeus Mozart: Concerto nr.20 in re minore per pianoforte e orchestra K. 466
Franz Joseph Haydn: Sinfonia nr.104″ London” in re maggiore
Verona, 16 novembre 2012
The third of the four concerts devoted to the Classical Viennese School  at the Teatro Ristori on Friday 16th November(repeated Saturday 17th)by the Fondazione Arena di Verona presented three representative masterpieces. : Beethoven’s  brooding Coriolanus Ouverture, Mozart’s remarkable piano concerto n.20 K.466 and Haydn’s consummate ‘ London ’ Symphony n.104.  The piano soloist was the impressive and very young Andrè Gallo and the concert saw the welcome return of the conductor Ola Rudner.  If the orchestra of the Fondazione Arena di Verona didn’t quite manage to launch into the necessary dramatic tension for the Coriolanus Ouverture, they nonetheless gave a decorous and dynamic performance swept along by the vigour and control of the conductor.   The dark D minor tonality in the symphonic orchestral introduction to the  Mozart piano concerto, on the other hand, with its propulsive effect of rhythmic syncopation and harmonic suspensions giving a sense of restlessness in the strings,  immediately generated an atmosphere of anticipatory suspense.  As in previous concerts, Rudner managed to bring out the best in the orchestra of the Fondazione Arena. The orchestra and pianist were in complete syncrony with a perfect balance in the moments of interplay between soloist and orchestra.  The full roundess of sound of the orchestral tutti was maintained even when designated a more accompanying role, and the phrasing, dynamics and balance were corrispondingly fine-tuned.  The very talented and accomplished pianist, Andrè Gallo, executed the concerto with secure technical mastery and unerring musical and aesthetic involvement.  His neat articulation and levity of touch, evoked the quality of a fortepiano, without renouncing  firmness and weight at the appropriate times. The elegance and eloquence of his line, particularly evident in the delicate and melodious second movement, and his innate musicality brought a refined and communicative expressivity to his performance; qualities which were confirmed in his three encores, Debussy Arabesque n° 1, e 2 pieces by Poulenc.
The excellent acoustics of the Ristori, allowed the conductor and orchestra to play with t The conductor took full advantage of this, at times reducing the dynamics to a whisper, highlighting harmonic suspensions, underlining accents and secondary lines, governing the balance and contrast between the different sections, carefully shaping the phrasing and devoting particular attention to the precision and homogenity of sound in the violin section: the graceful repeated staccato notes in the theme of the opening Allegro for instance and the final flourishes left to the violins repeatedly  throughout the symphony.  Moments  which emerged for the particular beauty of the ensemble playing were evident in the modified repeat of the main theme in the second movement with the violins and bassoon in unison amalgamated and balanced perfectly, and the fluctuating dialogue between the oboe, flute and bassoon in the trio of the third movement.  Rudner conducted with rigour and energy and the final movement characterized by its drone bass and theme based on folk melodies played gaily by the violins brought the symphony to a vivacious end. Foto Ennevi per Fondazione Arena