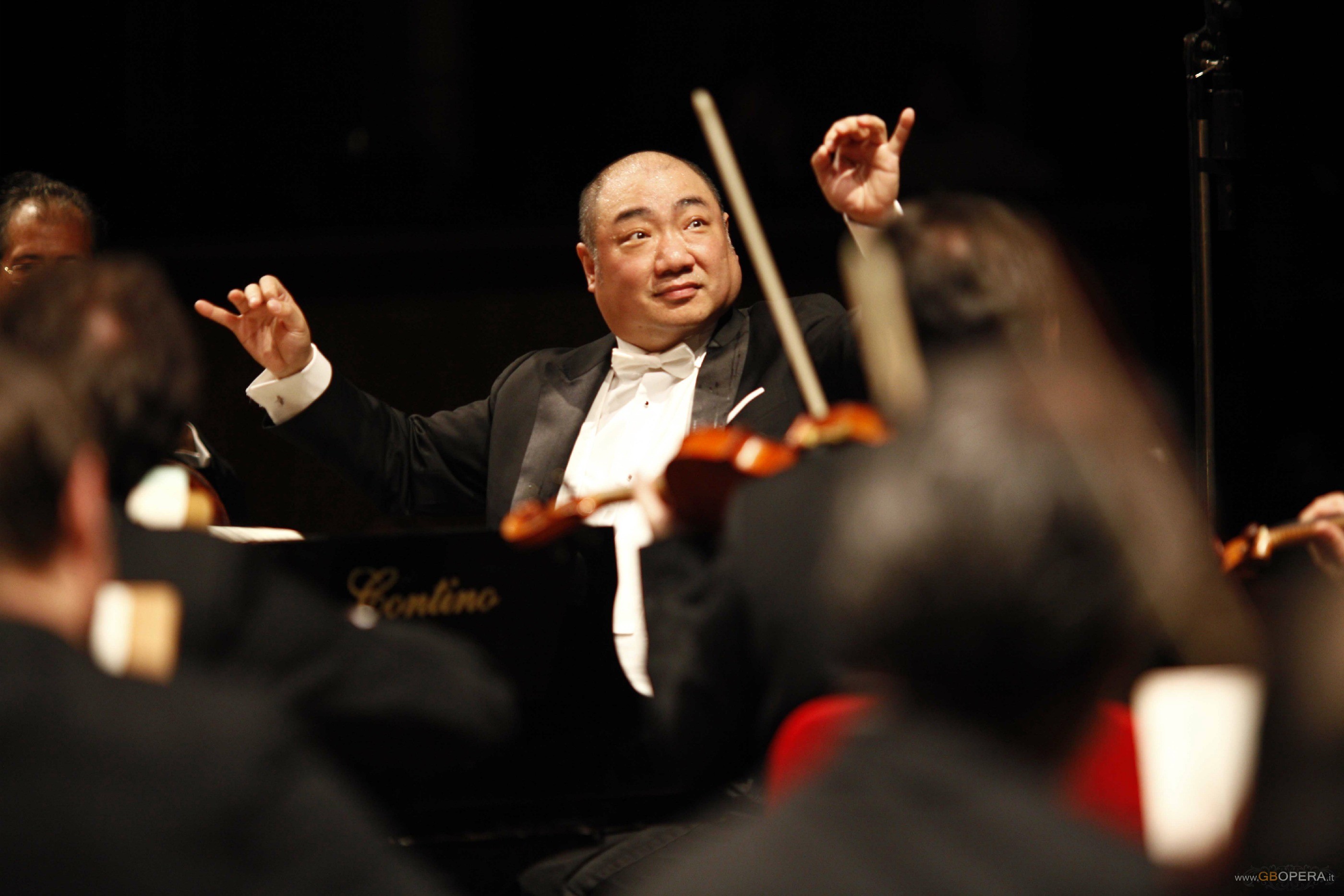 From Fedele to Franck: 7th concert of the symphonic season at Filarmonico

On Friday 8th February(repeat 9th) the Fondazione Arena di Verona continued its winter concert season with its seventh concert, conducted by Xu Zhong and  featuring four of the principal wind players from the Arena Orchestra as soloists, in Mozart’s Sinfonia Concertante K.297/b for oboe, clarinet, horn and bassoon. The programme,  as part of this season’s policy of  including a contemporary work, opened with Ivan Fedele’s  Syntax 01(if@ hay.dn) and the second half was dedicated to César  Franck’s Symphony in D minor.
Syntax 01, was commissioned in 2009 by the Haydn Orchestra in Bolzano to commemorate the bi-centenary of Haydn’s death.  In this work, the composer, Ivan Fedele,  clearly attempts to convey the continuing significance of the  distinguishing  characteristics of Haydn’s musical inheritance. Instrumental in the evolution of the sonata form, Haydn was very attentive to form, retaining a learned and rigorous musical structure. Fedele captures two essential characteristics of Haydn’s music in his development of larger structures out of very short, simple, musical motifs and in his exposition of contrasting themes. The woodwind and brass effectively rendered the progressively intense and expressive interplay of timbre and dynamics, precisely and convincingly. The same can not be said of  the violin section which, especially at the beginning, seemed uncertain and tentative, notwithstanding the clear and firm gesture of the conductor.  It wasn’t  until the atmospheric harp and piano section towards the end, that the orchestra seemed to have found the right equilibrium and  sense of style.
In Mozart’s beautiful Sinfonia Concertante K.297/b for oboe, clarinet, bassoon and horn, there was some very fine playing from the soloists, Claudio Ugolini oboe, Stefano Conzatti clarinet,  Paolo Guelfi bassoon and Andrea Leasi corno. Mozart displayed affection and prominence for the wind instruments in his operas and concertos, often entrusting them with memorable dialogues with the soloist. The Sinfonia Concertante form, is essentially a mixture of symphony and concerto genres, where the soloists alternate being on  prominent display, and being discernibly a part of the total ensemble, and not preeminent.  The first movement, with its double exposition, first that of the orchestra which announces the main themes and then that of the soloists, is the movement in which the orchestra’s pre-eminence is most felt. Unfortunately  the soloists, when not playing alone, were often engulfed by an orchestra which did not display particular sensitivity to the dynamic and timbric levels, nor to the phrasing of the solo quartet, and which resulted, particularly noticeable in the violins, heavy and dull, lacking in levity and brilliance. The second and third movements, where the soloists dominate and the orchestra recedes, fared better. The soloists, in a gentle exchange of dialogues, wove the harmonies and melodies of the beautiful and lyrical Adagio with grace and expressivity, and the final movement, Andante con Variazioni, interspersed with basically decorative orchestral ritornelli, gave each soloist in turn the opportunity to display the individual timbric and technical characteristics of each instrument, which they did with precision and elegance.
The Symphony in Dminor(1886-88) is the most famous orchestral work and the only  symphony written by the 19th-century Franco-Belgian composer  César Franck. That Franck finally chose to write a symphony is itself unusual, given the rarity of the form in 19th-century France , which considered the symphony the mainstay of German music. In it he employed his trademark “cyclic form”, a method of achieving unity in which all the principal themes of the work are generated from a germinal motiv. The main melodic subjects, thus interrelated, are then recapitulated in the final movement. The symphony is in three movements, each of which makes reference to the initial questioning and sombre four-bar theme introduced at the beginning of the piece by violas, cellos and basses. The elision of the standard scherzo movement is in part compensated for, with a scherzo-like treatment in the second movement. This movement is famous above all for the haunting melody played, beautifully in this case, by the English horn, first over a delicate accompaniment of plucked harp and strings, and then entwined in a chromatic obligato of the violas. The orchestra, on the whole, found its dimension in the symphony, with its romantic surges.  The conductor Xu Zhong maintained control and cohesion, with a clear and rigorous gesture, communicative in his musical intention, he managed to elicit  sensuality in the shifting textures through the frequent and graceful modulations of key, and create a build-up of recurring strong dramatic progressions, culminating in the last movement, in the exultant exclamation of the first theme, brought the full circle from its lugubrious beginning.  Soloists, conductor and orchestra were warmly applauded.  The annual, Veronese carnival parade, the last Friday before the end of carnival, which blocks the entire centre of town and which was in its closing phases at the start of the concert, was probably to blame for an only moderately numerous audience. Photo Ennevi