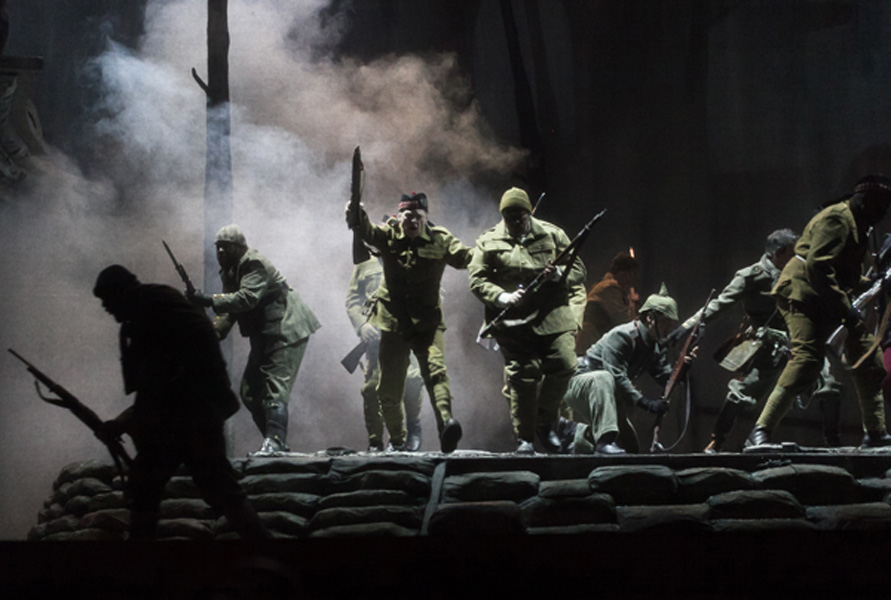 Newly renamed, Opera Philadelphia has revamped it’s Brand and Logo, and embarked on a ten year commitment to new American operas and has a freshly opulent Academy of Music theater to present them in, and in Kevin Puts’ Silent Night they have mounted a production which may signal the emergence of a major operatic composer onto the world stage.  Like many great operas it tells personal stories on a powerful historical canvas, in this case the hugely senseless carnage of WW I and the stories of three soldiers-French, Scottish and German who engineered a remarkable Christmas truce which  happened  during the Battle of Belgium in 1914. Based on the screenplay by Christian Carion for the French film Joyeux Noel and directed by the Academy Award winning Short Documentary director Eric Simpson this opera may represent the fruition of a process which began when  opera composers like Korngold brought post Straussian orchestral sounds to the American ear via Hollywood when they fled Germany.  Composer Kevin Puts, who won the 2012 Pulitzer Prize for Music with this piece, deftly meshes variegated styles to forge his drama, The orchestral writing is lush, and superbly crafted  and handsomely realized by conductor William Christie, who debuted Silent Night in November 2011 at the Minnesota Opera where he is Music Director. Grand sweep, fine touches, moving emotion and even humor were evident in the music all night long. The buildup to the scene where the enemy combatants  hesitantly come together to observe peace and Christmas was sublimely realized musically and scenically.
What makes this opera special is not just the fine music but the clear and moving storytelling by librettist Mark Campbell. Rooted in the cinematic genesis of Joyeux Noel, Campbell and Puts go beyond clear narrative and moving moments.. Instead of ending an Act with the deeply moving and potentially sentimental scene of the Christmas truce and Mass, they explore the human and personal stories of their characters with the contrasting foreboding of distant explosions and a brother’s desire for revenge. Only time will truly tell, but these brave choices elevate a good story to great theater.
Stage Director Eric Simonson’s cinematic eye and Academy Award winning experience  achieved both clear narrative and striking images. Difficult battle and crowd scenes as well as individual moments were clearly delineated and scene changes were fluid on Francis O’Connor’s large rotating unit set, evocatively lit by Marcus Dilliard’s. Video design by Andrzei Goulding, often projected onto a good old fashioned skrim provided for an effective modern look on a traditional stage. Sound Design by C. Andrew Mayer was on the pedestrian side, presumably because the Academy of Music doesn’t have the surround-sound of large movie theaters,but sound effects in opera are often problematic. Karin Kopischke’s costumes were effective. Like Quentin Tarantino’s films, Silent Night tells much of it’s story in the original language of it’s participants, English with a Scottish accent, French and German and with the clear supertitles the audience had no trouble following. With the exception of the French, the languages were passable and occasional linguistic jokes were a nice touch. The singing was effective and well executed in the narrative sections but never took wing. There was a lack of fluidity, expansion and climactic incision. Achieving great lyric intensity in Puts’ richly orchestrated style is no easy task, as anyone familiar with Zemlinsky’s Die Zwerg, or Korngold’s Die Tote Stadt knows.
Baritone Liam Bonner seemed to have the ideal opportunity in French Lieutenant Aubert’s sad Act I meditation but lacked the lower middle register and expressivity to elevate the soliloquy. His French was  also a distraction, in contrast with his General, played by Harold Wilson, who sang expressively with presence and consistency. Among the Scottish soldiers, Troy Cook looked the part, but his attractive baritone was underpowered for the big bagpipe hymn of Father Palmer. Zach Borichevsky’s bright attractive tenor conveyed youth and his cry for revenge at the end of Act I was an striking moment. The drafted German opera singer, Nikolaus Sprink is the most challenging of all, and recalls the famously difficult Zemlinsky and Korngold tenor roles. While William Burden’s lyric tenor sustained the tessitura it lacked the power and reserves to fully animate the passions of the role. Kelly Kaduce as Sprink’s operatic and personal partner has a lovely and strong lyric voice but seemed at times strident as a result of the wide tonal ranges covered. Mezzo Angela Mortellaro as Madeleine, Lt. Aubert’s wife has a strong and promising voice, which became uneven when covering large tonal swaths and she could not turn her long a cappella Dona nobis pacem into the star turn it was intended to be. Whether true dramatic voices are required to realize this opera or Mr. Puts needs to develop his vocal writing is a question which will have to wait for other productions, and there should be many. Silent Night is what opera should be: a compelling story well told with music that deepens and elevates. It comes from America, but it is a world opera.