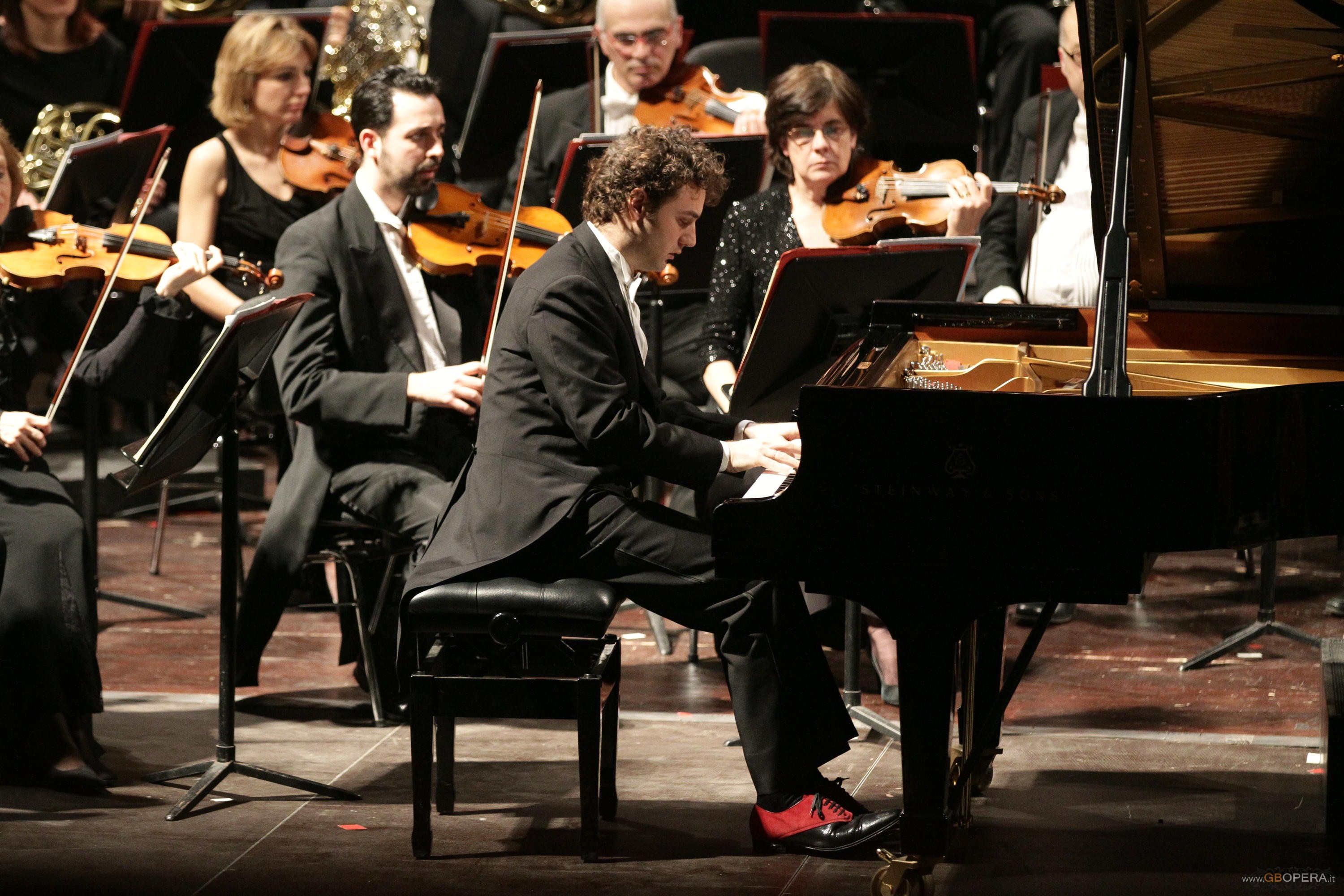 Except for a brief contemporary piece(now a fixed item at each concert) by the milanese conductor Alessandro Solbiati,  the  8th concert  of the Arena di Verona’s symphonic season at the Teatro Filarmonico, was completely dedicated to Russian music. The programme included three works, which, thanks to their intensely melodic and romantic vein, are much-loved by audiences, and consequently have been used and abused in numerous film and television sound-tracks, and a Broadway musical score.
The evening opened with  Rachmaninoff’s piano concerto n.2,  performed by the pianist Giuseppe Albanese with  the Arena Orchestra conducted by Silvio Viegas.  After the initial series of  solemn,  weighted chords growing progressively stronger, reminiscent of knolling bells, the pianist launches passionately into a turbine of an arpeggio accompaniment over which the warm dark sound of the strings sings an intense and nostalgic theme clearly inspired by traditional Russian music. The ensuing movement alternates heart-rending melodies charged with pathos, with strongly dramatic moments, where the virtuosic flourishes of the piano, often rhapsodic, are woven into the rich orchestral fabric. The introduction of ulterior beautiful secondary themes are often entrusted to individual string or wind sections. Likewise, in the second movement, one of the most beautiful and famous creations of the composer with its moving melodies in the great romantic tradition of Tchaikovsky,  individual instruments have the pleasure of exchanging and dove-tailing exquisitely beautiful and expressive phrases,  accompanied by the piano. After the flourishes and arabesques of the piano at the opening bars of the third movement, Allegro Scherzando, one of Rachmaninoff’s most beloved themes appears, first on the oboe and violas in a full and singing sonority, before being taken up in an onirical mood by the piano.  A rich and exciting build-up leads to a restatement of the luscious theme played majestically, before hurtling  towards the exultant close.
The soloist faced the technical challenge with panache, choosing rather fast tempos which highlighted his technical abilities and the virtuosic quality of the concerto though at the expense of an overall profounder sonority and a greater expressivity  in the more tender and lyrical moments. On the other hand his very direct dynamic approach, strong and tenacious to the end,  made no concessions to facile sentimentality.  The conductor, Silvio Viergas, at his debut with this orchestra, seemed to have a few difficulties establishing his tempos with the orchestra which, at the beginning, resulted in a moment of instability between the orchestra, whose forte in any case engulfed the  sound of the piano, and soloist.  In general, the string sections suffered from a scarcity of a well-knit sound, and the introduction to the fugue by the violins in the last movement  was untidy. The pianist received an enthusiastic reception, with repeated curtain calls, from the capacity audience, and rewarded them with three virtuosic encores including Etincelles by Moszkowski, and Earl Wild’s brilliantversion of George Gershwin’s Embraceable You.
The second half of the programme opened with a short incisive but refined work, Raggio, by the Milanese composer Alessandro Solbiati,  dedicated  to the composer Nicolò Castiglioni. The piece is striking for a clear and recognizable structure which, through a sensitive and expressive use of luminous colours, crystalline instrumentation and well-balanced sonorities efficaciously combines contrasting and complimentary shadings building up to the climatic apotheosis, before slipping away in a release of tension to a quiet and suspended ending.  A well-played and accurate performance by the orchestra who showed the work to advantage, capturing the nuances.The remaining part of the programme was dedicated to two enormously popular works; Modest Mussorgsky’s symphonic poem, A Night on Bald Mountain, inspired by Russian legends surrounding the celebrations of Walpurgis night, the witches’ feast,  suitably appropriated by Walt Disney as the sound-track for his film Fantasia, and  the Polovesian Dances from the opera Prince Igor by Borodin. Both these works are representative of the nationalistic movement in music, the promoters of which sought vivid emotional expression rather than classic beauty, and employed melodic style and idiom distinctive to their own country. The two composers, as well as their orchestrator Rimsky-Korsakov, belonged to the group known as The Five, who established a Russian school of composition as a reaction to the reigning hegemony of the German school and these works reflect the strong influence of traditional Russian folk music with elements of both Russian and oriental melodies and rhythms.  Both works contain strong, driving rhythms which enrapture the audience, and the succession of such seductive and beautiful themes of the Polovesian Dances were so popular that they were adapted as an  successful and beloved Broadway musical.
The orchestra had no difficulty sweeping the audience into the richly portrayed atmospheres of leggends, fairy-tales,sorceresses, exciting rhythms and poignant melodies of the two talented and original composers and their brilliant orchestrator friend and colleague. A special mention goes to the brass section, consistently precise and compact. The last dance propelled the piece precipitously to an exhilarating end, received with an ovation from the audience.