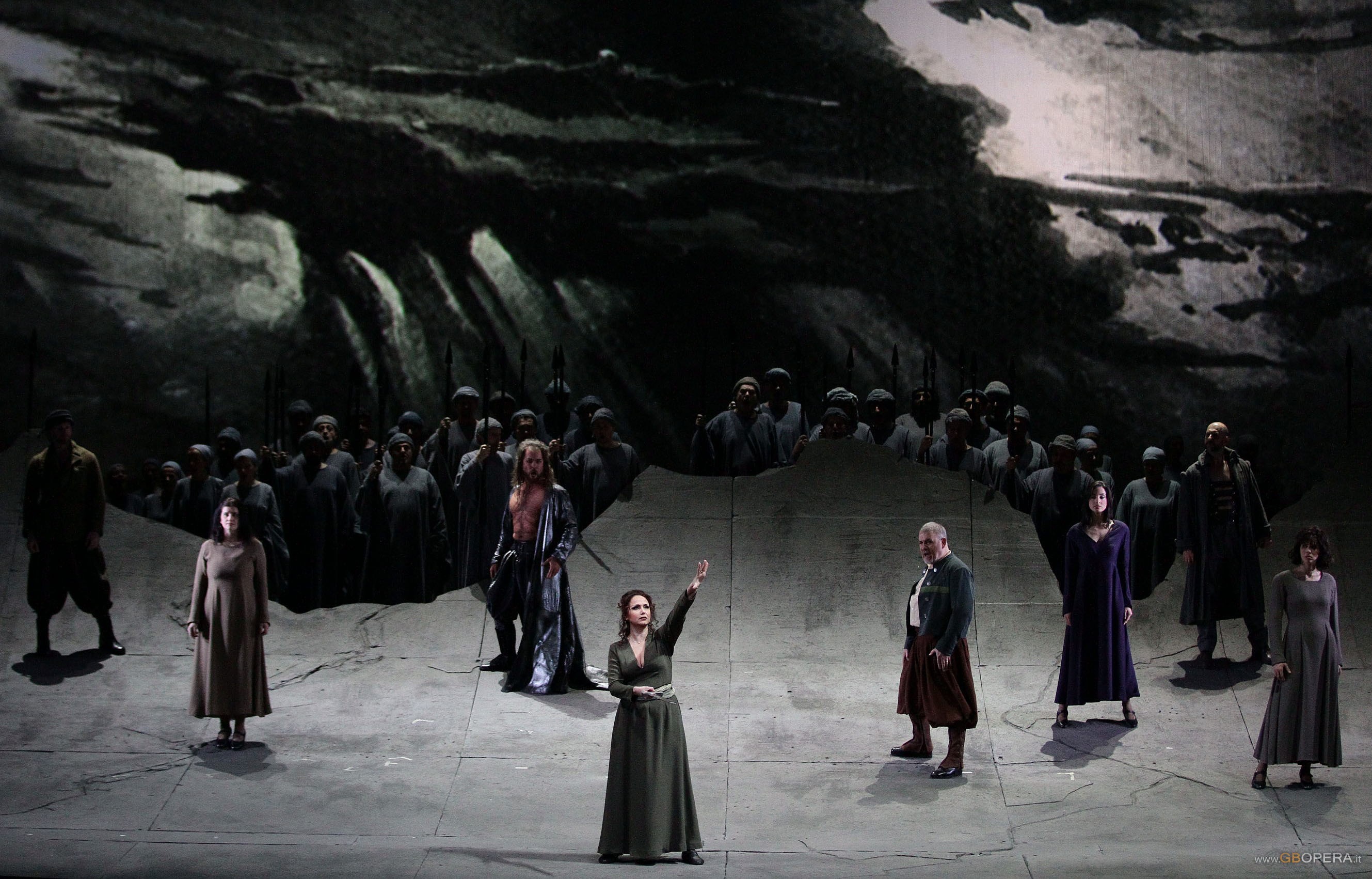 Verona, Teatro Filarmonico, Opera Season 2012/2013
“ATTILA”
Opera in prologue and three acts, libretto by Temistocle Solera, from the tragedy Attila, König der Hunnen by Zacharias Werner.
Composer Giuseppe Verdi
Attila, king of the Huns  ERNESTO MORILLO
Ezio, a Roman general  LEO  AN
Odabella  daughter of the king of ’Aquileja RACHELE STANISCI
Foresto, Aquilejan knight KHACHATUR BADALYAN
Uldino ANTONELLO CERON
Leone SEUNG PIL CHOI
Orchestra and Chorus of the Arena di Verona
Conductor Andrea Battistoni
Chorus master Armando Tasso
Director Georges Lavaudant
reproduced by Stefano Trespidi
Scenery and costumes Jean-Pierre Vergier
Original production in 2008 by the  Fondazione Arena di Verona
Verona, 12th February 2013
The fifth and final performance of  the Fondazione Arena di Verona’s production of Verdi’s Attila at the Teatro Filarmonico, coincided with Shrove Tuesday and the inaugural night of the iconic San Remo Song Festival, where a part of the ubiquitous Arena chorus was simultaneously opening the proceedings with ‘Va pensiero’ as a homage to Verdi in his bicentennial year.  This concomitance may explain to a degree the half-empty theatre and the reduced price tickets. On the other hand, in this early Verdian work, notwithstanding some first-rate numbers and some imaginative use of  the orchestra,  Verdi’s musical characterization is still unripe, and does not help promote the make-up of Verdi’s new dramatic language; with Foresto a nonentity, Ezio and Oldabella, flat and one-sided figures and Attila as much a confusing as a confused character. However, this ‘risorgimental’ opera, dated 1846, exudes its own particular strength and vitality. The idea behind Attila was that of  exalting the valour of the Italics as opposed to the ferocity of the barbarians, with the political element deliberately exploited to the utmost. The parts of Foresto and Ezio are anthologies of  ringing patriotic anthems which oppose the martial rhythms of the marches and choruses of Attila’s warriors. A few affectionate melodies give us a few moments of gentleness, but mostly the opera aims at grandeur and effect.
In this production the staging is minimalist but not ineffective. The raked stage projects the soloists and chorus towards the audience, giving them a much more immediate contact, and underlining a sense of an invading army, being on the offensive and  on the march.  The scenery, grey and bare, reminiscent of sand dunes along the ancient, swampy Venetian lagoon, were at the same time unobtrusive enough to be incorporated into  the projections on the back-drop depicting accordingly Aquileia burning,  Venice, the saints accompanying  Pope Leo, (a scene which turned out to be  all the more striking in this performance, coming as it did the day after Pope  Benedict’s abdication),  and the fire-works celebrations at the end of the Act 11.  The costumes were historically inconsisent without disturbing the dramatic cohesion, with Floresto and Ezio dressed as modern men in black, Attila in orientalizing drapes,and Oldabella in indefinite antique.  The Aquileian exiles dressed in 40’s fashion complete with suitcase, brought to mind, at least to a regional audience, the Istrian refugees in a similar situation and in the same geographical area after World War 11, while the presence of the statuary Roman centurion in their midst, kept the analogy anchored to the setting of the original story.
In general the cast acquitted themselves with decorum.  Ernesto Morillo as Attila demonstrated a assertive stage presence and  vocal tenacity revealing a strong voice of interesting colour. Unfortunately his tendency to push  led to an unsteady focus of  emission which resulted in unclear diction. But on the whole his Attila was convincing.  Leo An as Ezio, had a firm, full and even voice, clear diction and meaningful delivery supported by a  most commanding stage presence.  His performance was the most incisive of the evening. Rachele Stanisci as Odabella  was at her most convincing in the lirical  cavatina ‘Oh nel fuggente nuvolo’ scored exquisitely for flute, English horn, harp and cello, which give the voice a  most delicate yet expressive support.  She handled the vocal line with masterful breath-control, long even phrasing, intense changes of colour and contrasting dynamics,  clear diction and focussed emission. A vocal high-point of the evening. The superb piece of musical invective, expressing the ferocity of her sentiments at her first entry in the Abigaille-like ‘Allor che i forti corrono’ demonstrated a formidable vocal tenacity, but also highlighted the inevitable limitations of a lyrical soprano in this role. Beautiful in the lyric, at ease with the coloratura, in the dramatic declamatory moments, the middle and lower voice in comparison were opaque and weak. She tended to darken the voice in this situation,  which only contributed to rendering the words incomprehensible. The preceding recitative contains a scale passage from top C to B below middle C, and the aria’s tuneful vigour and brilliant cabaletta are theatrically irresistible.  Overall, Stanisci gave a strong and committed performance. Khachatur Badalayan’s Foresto was well sung but lacking in personality and colour.  Precise and  prompt Antonello Ceron as Uldino. Measured and appropriate Seung Pil Choi as Pope Leo.
On the whole the orchestra, conducted by Andrea Battiston,i was disappointing.  Right from the opening bars, the orchestra seemed unattentive and disinterested. The articulation was sloppy, the dynamic level was constantly forte/mezzo-forte, and  the chorus, covered by the orchestra, was often inaudible. Within the orchestra, the different sections were not calibrated to each other. The musical depiction of dawn breaking, instead of arriving gently and  progressively, arrived at a forte almost immediately. The playing was very lax and the conductor seemed unable to obtain a dramatic tension from them. Curiously, the most attentive and  sensitive playing was to be heard  in the simple, soft, orchestral accompaniments of the arias. Photo Ennevi