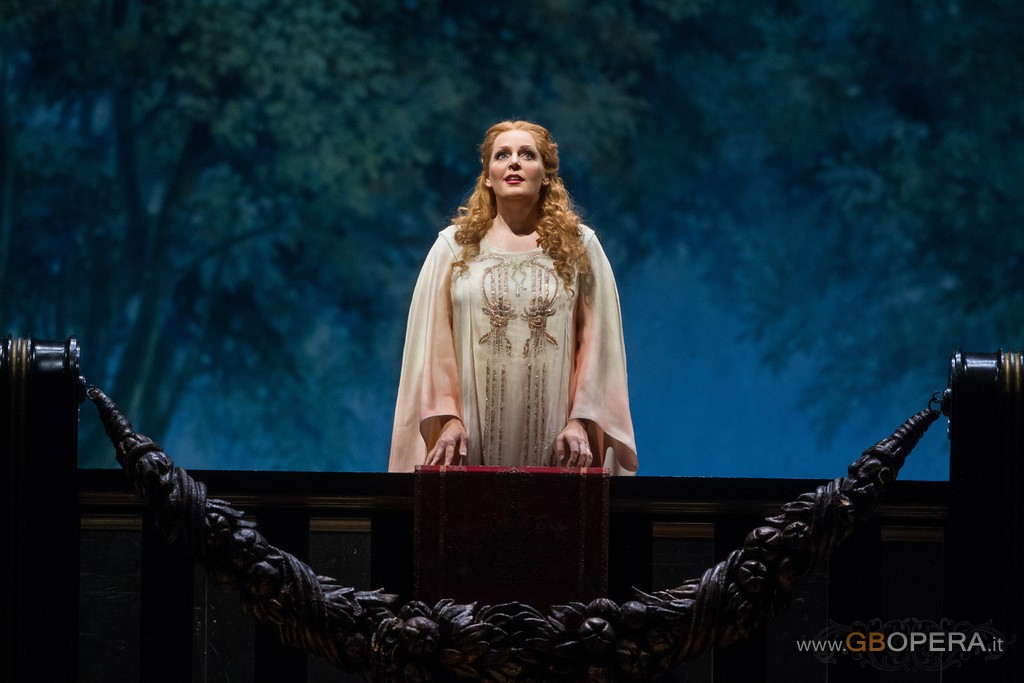 “Francesca da Rimini” at the Met

A program note for the Metropolitan Opera’s revival of Zandonai’s Francesca da Rimini observes that “When the current splendid production by Piero Faggioni premiered [at the Met] in 1984 — with Renata Scotto and Plácido Domingo heading the cast — it scored a major triumph, leading to a reconsideration of the work itself.” That reconsideration was not significant enough, it seems, to warrant the opera’s more frequent programming by this company: after only a handful of performances in the subsequent season, Francesca wasn’t seen on the Met stage again for nearly three decades, until last month.
This opera has never caught on in the United States, but it is worthwhile, and the Met is to be commended for giving its audiences a rare opportunity to hear this music again. A few questions remain: why now? And why with this cast? And why has this revival been selected for HD simulcast (and subsequent DVD release), when the Met has already a perfectly good video from the 1984 performances, starring two of the world’s greatest singers?  It’s unfair to measure the current stars, Eva-Maria Westbroek and Marcello Giordani, against Scotto and Domingo on artistic grounds, but even more unfair on commercial grounds. Who, exactly, is supposed to prefer the forthcoming DVD over the earlier one? Zandonai completists who must possess every single recording of the master’s music — technology buffs who insist that superior camera work and sound quality override other artistic considerations?
Not long ago, Giordani might have seemed an ideal fit for the role of Paolo, but his singing in New York this season has been disappointing — particularly his assumption of the role of Enée in Berlioz’s Les Troyens at the Met last December. A decade ago, Giordani managed to sing the same composer’s Benvenuto Cellini at the Met with excellent French diction and vocal power, though he lacked a degree of finesse. In December, he tried and failed to muscle his way through Enée, producing sounds that were loud but not at all lovely, and after a few performances he withdrew from the production, permanently retiring the role from his repertoire and paving the way for the successful Met debut of American tenor Bryan Hymel. (I attended two performances by Giordani, as well as Hymel’s debut; Hymel also appeared in the HD simulcast and the forthcoming DVD release.)
Expectation therefore mingled with anxiety as Giordani’s first major enagement since Troyens — namely the opening of Francesca da Rimini — approached. In the event, Paolo found the Sicilian tenor in somewhat improved vocal estate, without inspiring him to a musically coherent performance or a dramatically compelling portrayal. His Francesca, Dutch soprano Westbroek, is known to New York audiences primarily for her Sieglinde, and since Zandonai’s score does reveal Wagnerian influences, it might be supposed that this extremely attractive artist would shine in this role. But this music really doesn’t flatter her voice, and she proved unable to bring to it the colors and bite that Francesca requires.
Fortunately, the rest of the cast delivered assured, flavorful performances. As the conflicted Gianciotto, the brutish husband who craves Francesca’s love, American baritone Mark Delavan skillfully mingled force with feeling, and one found oneself surprisingly moved by him when his wife rejected him. As the treacherous teenager Malatestino, American tenor Robert Brubaker sliced through his upper registers with fearless ease and physical agility. And conductor Marco Armiliato paid close attention to Zandonai’s inventive orchestrations, though he was most effective in the most bombastic passages, notably the siege in Act II.
Ezio Frigerio’s sets (stately halls and bristling battlements) and Franca Squarciapino’s costumes (exquisite patterns inspired by Pre-Raphaelite painters) are even more impressive than one remembers them to have been three decades ago, especially under Gil Wechsler’s gorgeous lighting designs. But Faggioni’s staging, now under the direction of David Kneuss, relies on exaggerated gestures and movements that seem positively old-fashioned and unlikely to translate well either to the movie screen of the HD simulcast or to the home screen of the DVD purchaser. The cast seemed under-rehearsed during Paolo’s attempted escape in Act IV, leading a spectator to wonder yet again what the Met hopes to gain by broadcasting and recording this Francesca. Photo Marty Sohl/ Metropolitan Opera