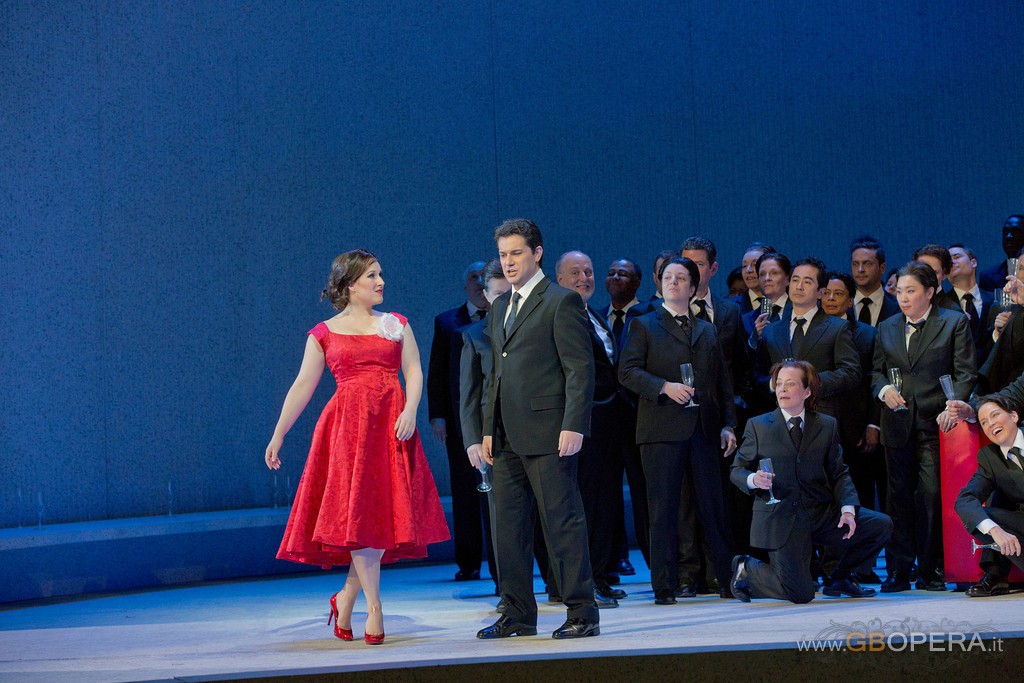 “La Traviata” at the Met

The Metropolitan Opera’s revival this month of Willy Decker’s stripped-down production of La Traviata (first seen at the Met in 2010 but familiar to European audiences; it originated in Salzburg and was recorded for DVD with Anna Netrebko) generated exceptional interest due to its cast. German soprano Diana Damrau, a favorite in New York, would add Violetta to her repertoire, and the rising Albanian tenor Saimir Pirgu would sing Alfredo, a role that has brought him acclaim in other theaters. Perhaps most intriguingly, Plácido Domingo, who has sung Alfredo and conducted Traviata at the Met, would take on the baritone role of Germont, just weeks after celebrating his 72nd birthday.  For the second performance of the run, on March 18, Italian tenor Salvatore Cordella stepped in on very late notice to replace Pirgu, who was ill. Cordella dispatched his duties capably, and his interactions with Damrau were especially satisfying dramatically. While his voice did not strike a listener as particularly memorable, the urgency of the circumstances may have affected him, and just getting through the evening was a commendable achievement.
All the more focus, then, trained on Damrau, whose previous outings at the Met (including Gilda in the new production of Rigoletto, reviewed here) have been primarily in high-flying, sugar-cake roles. She sang Violetta with luxurious warmth, and in her rich, almost touchable middle and lower registers, she sounded almost like a mezzo-soprano — until she popped off the most confident high E-flat I’ve heard at the end of “Sempre libera.”
She made especially expressive use of dynamic shadings to create a vivid character. And for much of the evening, she sang while dancing (in very high heels), jumping, or lying flat on her back; despite having given birth recently, she proved that this production doesn’t depend upon a willowy profile such as those of her Met predecessors, Marina Poplavskaya and Natalie Dessay.  While sometimes uncertain of the text, Domingo was in absolutely brilliant voice, with no roughness, no wobble, no audible strain. The voice may not have quite the range it once did, but it has most of the power and all of the burnished golden tone of yore. Finding suitable roles is, however, more challenging than it used to be, and the brighter sonority he brings to Germont requires the audience to reconsider the character that Verdi and Piave (and, for that matter, Decker) created. This is no immovable force of conventional bourgeois rectitude but a more vulnerable, hesitant man; even his tousled white hair suggested less the president of a bank than a lowly clerk. The audience greeted his first entrance with applause, however, and it was clear by the cheers at the evening’s end that he had won us over completely.
Like all the demimondaines in this production, Flora wears men’s clothing; mezzo Patricia Risley brought an aptly virile tone and lively physicality to the role. The sonorous bass-baritone James Courtney (who made his company debut in 1979), played the ominous Dr. Grenvil, treated here by Decker as an ever-present symbol of Violetta’s mortality. Maria Zifchak (Annina), Jason Stearns (Douphol), Kyle Pfortmiller (d’Obigny), and Scott Scully (Gastone) turned in distinctive performances, cannily making the most of their brief roles.  Canadian conductor Yannick Nézet-Séguin encountered a few coordination problems in Act I but for the rest of the evening delivered a sensitive, genuinely poignant reading of the familiar score; in his case, too, the backstage drama may have affected the performance. (Whether it was he or the prompter, Jane Klaviter, somebody cued the singers with the text — loudly — all night long.) Appropriately enough in a production that’s dominated by a gigantic clock, Nézet-Séguin stretched out Verdi’s slower tempi until they were very slow indeed, creating a kind of transparent stillness that was at times almost mystical but never slack.  With that clock, Decker’s production overemphasizes the importance of time in this story, much as some other productions overemphasize the importance of money; the stylized movements and heavy symbolism diminish the immediacy and impact that might be gained by restoring the setting to our own time. (Verdi and Piave set the opera in their own time, of course, but there it has remained for too long.) With Wolfgang Gussmann’s minimalist set and simple costumes, this is surely the starkest Traviata the Met has ever seen, the antithesis of the two most recent productions, lavish and literal-minded, both by Franco Zeffirelli. But New Yorkers are getting used to it, and they cheered Damrau and Domingo exuberantly. Photo Ken Howard/Metropolitan Opera