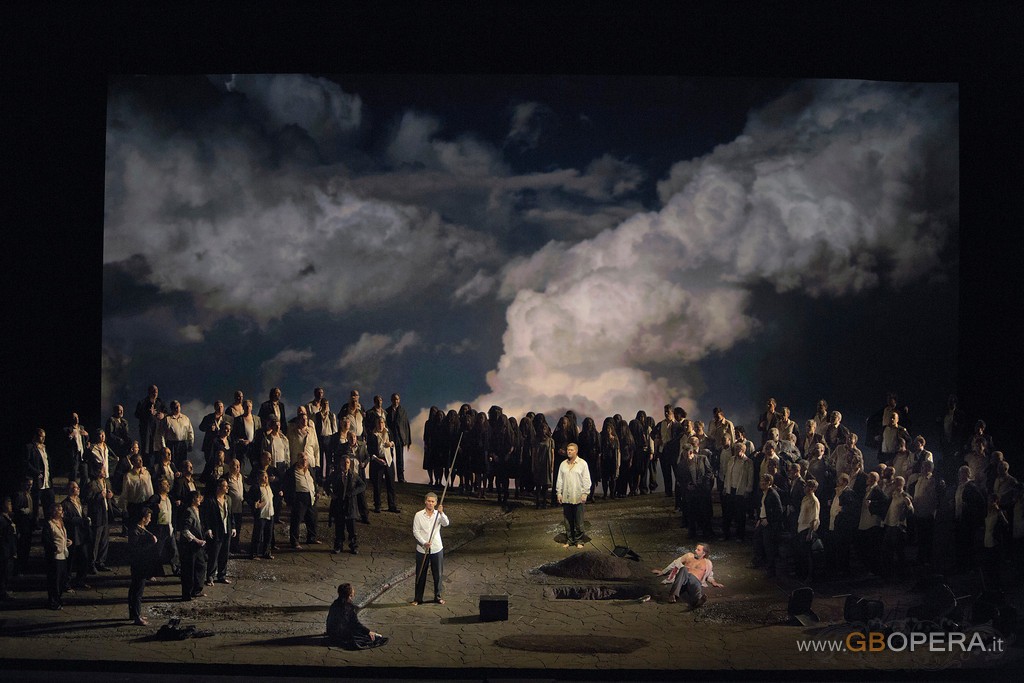 The Metropolitan Opera’s new production of Parsifal (opened 15 February), in cooperation with l’Opéra de Lyon and the Canadian Opera Company, represented the company debut of François Girard, the Canadian film director (22 Short Films about Glenn Gould, The Red Violin) with a fruitful history with both the Lyon and Toronto companies. Somewhat alarmingly, perhaps, Girard also has a history with the Cirque de Soleil troupe that propelled another director, Robert Lepage, to the Met with a controversial Ring cycle that has found far more detractors (including this writer) than admirers. Happily, Girard’s staging proved to be as spare as Lepage’s was cumbersome, and he managed to work without acrobats.
Envisioning Montsalvat as a flat, cracked desert plateau like something out of Samuel Beckett, Girard instantly focuses the spectator on the essentials of this story, and the use of the simplest modern costumes (white shirts and black trousers for the barefoot Grail Knights) translates Wagner’s complex mythology into something that could happen to any of us in the audience. (Indeed, I was wearing a white shirt and black trousers while I watched.) Even Peter Flaherty’s video projections, against an upstage screen, only briefly suggest the literal (cloudy skies) in favor of the abstract or the metaphorical (a lunar eclipse).
This in itself signaled a radical departure from the Met’s previous production, by Otto Schenk, a lavishly literal staging that looked very much like an illustrated fairy tale. (Schenk also produced the Met’s previous Ring Cycle.) But in virtually every other respect, Girard’s production resisted radicalism.
A crevice slices across Montsalvat, the dried-out track of a stream that sometimes flows red with blood and sometimes splits wide open, a reimagining of Amfortas’ wound. In Act II, set in a deep gorge, the stage is awash with blood, a shallow pool that threatens to stain the simple white shifts (sottovesti) of the Flower Maidens, and in which Klingsor bathes. Act III finds the Grail Knights in disarray, no longer wearing uniform costumes, and ominous graves have been dug. The promise of spring’s renewal and the libretto’s direct references to flowers go unheeded in what is Girard’s only significant lapse. (The decision, in the same act, to let Kundry carry the coffer in which the Grail is contained was merely puzzling.) With both the Knights and the Flower Maidens, Carolyn Choa’s minimalist yet rigorous choreography enhanced the sense of ritual. Almost continuously onstage in Acts I and III, a silent chorus of soberly dressed women suggested that the Grail community extended beyond the Knights.
Musically, this Parsifal could hardly have been improved. Israeli conductor Asher Fisch, taking over from Daniele Gatti (who led on opening night and the intervening performances), followed the Italian maestro’s example with a muscular reading of the score that scarcely resembled what New Yorkers have heard from the Met’s music director, James Levine, who effectively owned this opera until he was sidelined by health problems. In his heyday, Levine stretched out Wagner’s music to a degree that was (depending on whom you asked) either brilliant or insufferable; Gatti (heard on the radio broadcast) and Fisch restored it to human proportions without sacrificing the sublime.
The singers responded with exquisite singing. Swedish baritone Peter Mattei, as Amfortas, was the revelation of this production, unfurling a sweetly burnished legato that somehow heightened his character’s anguish. As arguably the only sane character in this opera, German bass René Pape profited most from Thibault Vancraenenbroeck’s contemporary costume designs and invested Gurnemanz’s every note with nobility; he is quite simply one of the greatest singing artists alive today. German tenor Jonas Kaufmann’s rich, baritonal voice and youthful appearance created a Parsifal whose mature wisdom may have been a foregone conclusion, but it was a pleasure to hear this role sung with such ease and unforced power. Filling in for an indisposed Katarina Dalayman, American mezzo-soprano Michaela Martens revealed comparable musical gifts, shrieking only when required to do so (unlike so many other Kundrys) and producing a vibrant warmth perfectly suited to the character’s seductive and maternal sides. As Klingsor, Russian bass-baritone Evgeny Nikitin avoided hammy theatrics (hard to do when you’re wallowing in blood), but his singing lacked the ideal bite and power. The Met’s immense chorus, proud exponents of Wagner’s most demanding scores, surpassed itself on this occasion. Photo Ken Howard / Metropolitan Opera