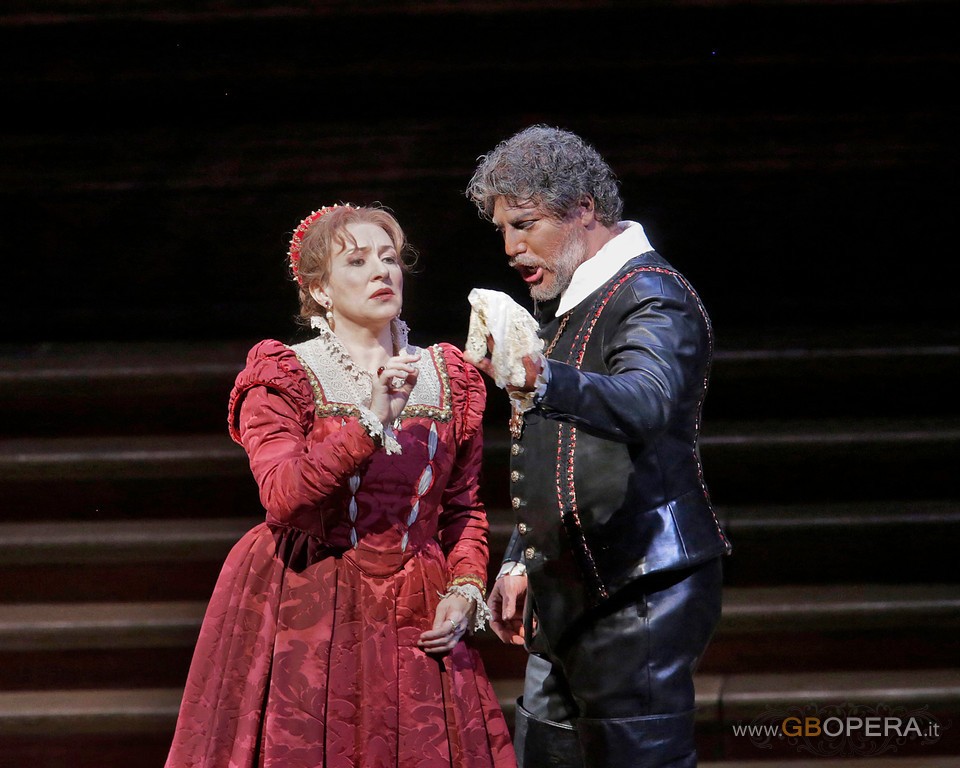 Verdi’s penultimate opera returned to the Metropolitan on 11 March for just three performances, after an absence of several months. (Performances last autumn featured Johan Botha, Renée Fleming, and Falk Struckmann; one of these was simulcast in HD and will be available for streaming and on DVD.) None of the three lead singers, José Cura, Krassimira Stoyanova, and Thomas Hampson, had sung these roles before in this theater, and particularly because Cura’s Otello has won acclaim around the world, interest ran high.
The first two acts found the Argentine tenor anxious and evidently in a great hurry to be through with the opera altogether. While French conductor Alain Altinoglu strove vainly to keep pace with him, Cura sped ever onward; his voice sounded ragged, and his pitch proved unreliable. After the intermission, Cura recovered much of his vocal poise and showed himself far more willing to adjust his tempi to those of the conductor and of his colleagues; by the end of the evening, he delivered a musically and dramatically effective Act IV. Yet this was at best an adequate, not a first-rate Otello, a missed opportunity for New Yorkers and for Cura himself.
As a sometime conductor and stage-director, Cura may have brought his own ideas to this mid-season revival of Otello, for which rehearsal time was limited. It’s unclear, for example, whether he simply forgot to strike Desdemona in Act III, Scene 2, or whether he believes that Desdemona is by this point so psychologically abused by her husband that she kneels at his command (likewise, it was unclear whether Desdemona was stunned by Otello’s behavior, or whether Stoyanova was stunned by Cura’s failure to hit her).
With curiously weak gestures, Cura never managed to offer much opposition to Hampson’s Jago, who dominated Otello from start to finish. Though I admire the American baritone immensely, this isn’t a role I’d have chosen for him, and yet the inherent elegance he brings to all his singing proved apt for the scheming character whom nobody suspects. In his smoothly shaped reading of the music, Hampson’s Jago seemed the picture of nobility and reason — at least until the “Credo,” pronounced with roars of rage and seething venom.  Overall, however, the most satisfying performance was that of Stoyanova as Desdemona. The Bulgarian soprano’s instrument is so lyrical that a listener hardly notices how powerful it is, and after all the rushed tempi in Acts I and II, the long, spinning phrases of her “Willow Song” and Ave Maria seemed especially welcome. Dramatically, she’s more aggressive than many Desdemonas, and her pleading on Cassio’s behalf bordered on (sweetly musical) nagging — an interesting and valid choice, if not a definitive one. Especially because of the advocacy of Domingo and of James Levine (he has conducted 82 performances of Otello at the Met, more than any other work), the Met orchestra has a great deal of experience with this score. (Other recent conductors of Otello at the Met include Valery Gergiev and, earlier this season in the performances with Botha and Fleming, Semyon Bychkov.) Much of the present performance required more damage-control than artistic expression on Antinoglu’s part; it speaks well of the Met musicians that they managed to respond alertly to his cues and to deliver an otherwise reasonably coordinated, coherent performance — it’s not likely that many other orchestras could do the same.
Moshinsky’s production, introduced in 1994 with Plácido Domingo as the Moor, takes monumentality to its most grandiose heights.  With sets by Michael Yeargan that dwarf the singers, this Cyprus is no backwater outpost. Yet as stage-directed by David Kneuss, scene changes move swiftly (at least, by Met standards) and the drama remains clear and focused. Really, only Desdemona’s vast bedroom defies belief (it’s a wonder Otello can even find her). But by then Verdi’s music has worked its magic spell, and even the impetuous José Cura must submit to it. Photo Ken Howard/Metropolitan Opera