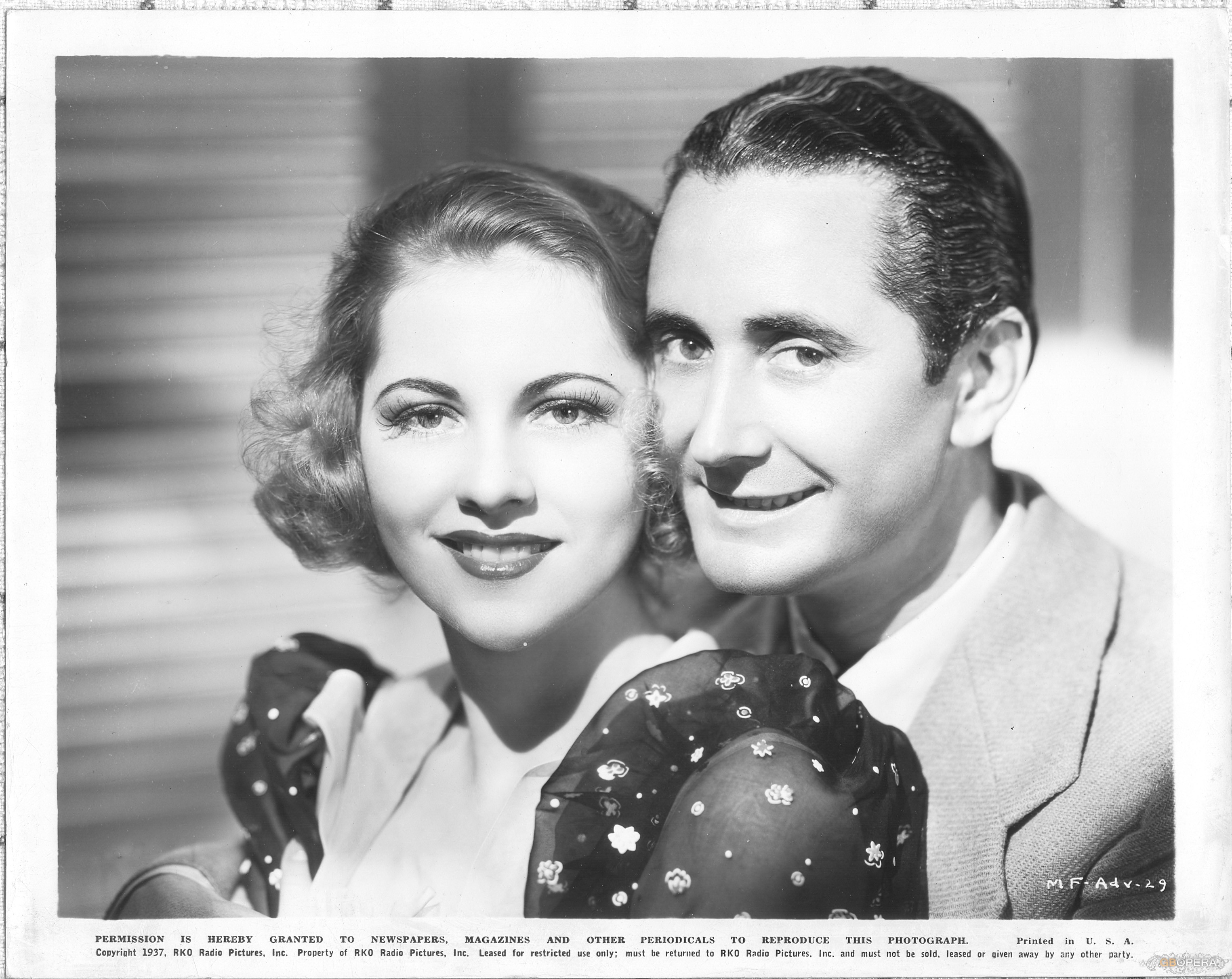 Throughout his career he sends a postcard to each nephew from each city of the USA and Canada where he performs a concert. The CBS again requested that he continues his bi-weekly concerts on the radio and another radio station contacted him for a third concert during the same weeks. During the season in which he was engaged at the Metropolitan, the artist, by direct order of management, could not  assume  other engagements with other interested companies: however more than once due to pressures of other interested entities, he was allowed permission to do concerts.
He spents the summer of 1934 in Italy with his mother, whom he saw for the last time,going to mountain resorts,seeing a few operas of the lyrical season at the Arena of Verona and playing the role of uncle with the four nephews he had at that time. Upon his return to the United States, he resumed performing concerts ( the pianist that accompanies him is Miguel Sandoval from Guatemala) until December when he resuemed reciting at the Metropolitan until the end of April.In the meantime he was scriptured by Jesse Lasky for a movie whose filming was to start in May 1935 and was to last 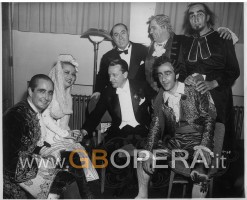 for about ten weeks: the title of the movie was “Here’s to Romance” and at his side are Anita Louise, Genevieve Tobin, Ernestine Schumann Heink, Maria Gambarelli. The director is Alfred E.Green.
In June 1935 his mother was admitted to the hospital with an unknown affliction and her conditions quickly got worse.: knowing Nino’s affection for his mother,after a series of telegrams it was decided not to tell him of her condition confiding in an improvement of her health,but unfortunately the irrepairable happens. It is hard to imagine the feelings of Zenatello,who was costantly in contact with Martini’s sisters, when he had to tell him of his mother’s death.: in his letters Zenatello mentioned how Nino remained immobile for two days without speaking or eating. 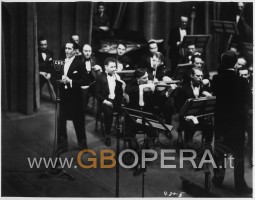 He quickly recovered and ordered the construction of a monumental tomb in the cemetery of Verona (inside it on the altar there inscription “Nino to his adored mother”) and wanted his sisters Rosetta and Iolanda to join him in the United States where they remained until the spring 1937. In the meantime work on the movie continued: he was attributed affairs with Astrid Allwine and Anita Louise (his partner in the movie). The movie was presented in the Autumn of 1935 with great success and the following year was showm in Verona where his fellow citizens had the opportunity to know him better and to hear him sing. In Autumn he resumed his artistic activity and his sisters realized how popular their brother was by seeing the recitals at the Metropolitan and by following him on some of his tours. In the meantime he became sentimentally involved with Elissa Landi,actress and writer,who died in 1948: she was highly cultivated and socially elevated and she provided a means for Martini to know and appreciate great musicians of the past.

Not having forgotten his birth land,where in November 1935 economic sanctions had been applied by the Society of Nations, he held several concerts for a campaign to collects funds called “Pro gold to Italy”: only in 1965 he was given an award by the Italian government as a sign of gratitude. In the summer of 1936,again engaged by J.Lasky,he interprets the movie ” The Gay Desperado” at the side of Ida Lupino, Leo Carrillo, Misha Auer and directed by Rouben Mamoulian : The filming was done mostly in the Arizona desert and his sisters were present. 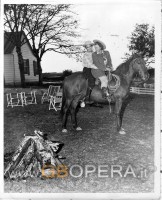 Once the movie was finished and after a well earned vacation, he resumes his activity and was again engaged by J.Lasky to interpret the movie “Music for Madame” at the side of Joan Fontaine, a.Mowbray,B.Gilbert and  directed by J.Blystone. The 1937-38 season began with concerts in various US cities followed by recitals at the Metropolitan and a second series of concerts (one of which at a reception in his honor at the Italian embassy in Washington for the “Pro Gold to Italy” concerts) alternated with recitals at the Metropolitan. In June of 1938,after four years, on the liner “Conte di Savoia” he returned to Italy where he remaied for a well earned rest period with his family until the end of August,when he returns to US on the liner “Rex” with Paulette Goddard. Throughout his vacations he drove a beautiful car Cord 812 sedan,object of admiration wherewer place he went.He resumed his artistic activity of concerts  alternated with recitals at the Metropolitan. The situation in Europe in the summer of 1939 was such that a trip to Italy was not advisable: he therefore spent some time in the national parks in Nevada and Colorado with Eleanor D.B.with whom he became sentimentally involved.

Because Italy went to war in 1940 he had to forfeit a series of concerts in Canada and spends his vacation on the island of Bermuda where Eleanor owned a home  (as an Italian citizen he could have been arrested by British authorities). In 1941 he became a US citizen and continued his artistic activity with concerts (from the autumn of 1941 he was accompanied by the pianists Robert Mac Donald, Stewart Willie, Theodore Haig and others in his concerts), operatic recitals with the Metropolitan,with the Philadelphia La Scala Opera and other companies of north America.

He often goes to military bases for concerts on invitation of the USO Camp Shows. In the rare letters received by the familiy in Italy via Switzerland between 1942 and 1945,he told of his work,of his successes and asked news of everyone not hiding a certain concern for the tragic situation in Italy.In May of 1945, following an invitation of the Overseas Division of the USO Camp Shows,he left for Europe in the secret hope of somehow being able to reach Verona. The group was formed by Grace Moore, (his partner at the Metropolitan),the violinist Joseph Haber and the pianist Warner Bass. After a long and unconfortable journey in a military C54 airplane (in 1945 it took 30 hours to fly from New York to Europe and  they had to sleep on the floor between two blankets) the group arrived in Paris where the series of concerts began for the allied forces located in various places in France and Germany (among others in the Nuremberg stadium and the Wagnerian theatre in Bayreuth).One afternoon at a military base in Bavaria a pilot with the rank of Colonel sees him studyng a map of southern Europe and asked Martini why he was doing this: he responded that he wanted to know the distance to Verona,the city where his family lived and which he had not seen for seven years and of  which he had no news.The next morning four P51 of the US Air Force left  the base and after less than an hour landed at Verona airport.

In one of these there is Martini: in order to transport him in the  person fighter,some of the equipment was removed from behind the seat of the pilot. On the morning of 4 June an american soldier with gray hair went to Martini home and was not recognized by one of his nephews ( the last time he saw his uncle in 1938 he was six years old), but immediately after anhother nephew,curious about the presence  of an American soldier,recognized him. It is not hard to imagine his joy in seeing his family safe and in good health even though somewhat thin ! At the evening his nephews (six rather lively boys) with a case of flares abandoned by the Germans organized a fireworks show in their yard which irritates the allied military police which didn’t succed in stopping them. 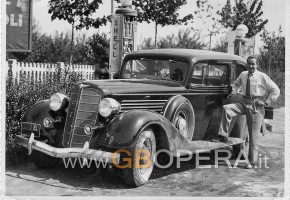 Only once the flares are finished was their uncle (still  wearing the military uniform) able to appease the MP’s. After 24 hours the four Mustang returned to Germany with Martini who resumed  his tour through Germany, France  and southern Italy. During his stay in Germany a few mishaps occured. One day he was flying from Nuremberg to Pilsen  with the officer that had taken him to Verona. While they were flying over Prague they realized they had gone into a zone occupied by the Russians: they were forced to land by the Russians and remained blocked for several hours. None of the Russians knew English or German languages and the only Russian words known by the  two were “I love you,let me kiss you,goodbye”. 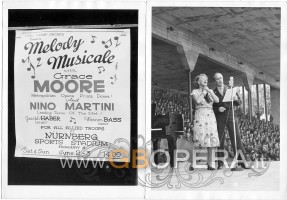 In the end,after who knows what negotiating between the American and Russian Military authorities, they were allowed to leave and they landed in Pilsen with almost empty fuel tanks. In July the group was to perform a concert in the Arena of Verona to which the citizens of Verona were invited, but, due to absence of Grace Moore, the concert was held at the local American command. Among those present were Martini’s sisters,his brother in law and nephews,who for the first time heared their uncle sing. After the concert Martini remained in Verona for about a week and came to realize the extent of the damages caused by the war. (end of the forty part)