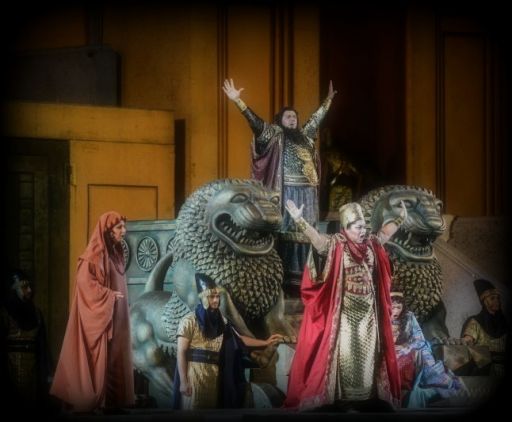 2 Premieres in 2 Days:”Nabucco” in the Arena

Verona,  Arena di Verona  Opera  Festival, Centenary Season 2013.
“NABUCCO”
Opera in four acts, libretto by Temistocle Solera
Composer Giuseppe Verdi
Nabucco AMBROGIO MAESTRI
Abigaille  TATIANA MELNYCHENKO
Zaccaria CARLO COLOMBARA
Ismaele  STEFANO SECCO
Fenena ANNA MALAVASI
High Priest of Baal  FRANCESCO PALMIERI
Abdallo LUCA CASALIN
Anna  MARIA LETIZIA GROSSELLI
Orchestra and Chorus of the Arena di Verona
Conductor Julian Kovatchev
Chorus master Armando Tasso
Director Gianfranco de Bosio
Set design Rinaldo Olivieri
Costumes Psquale Grossi
Verona, 15th June,  2013
The chorus and extras of Babilonians were vibrant in their compact monochrome groups in turquoise, cobalt blue  and fuscia costumes. Their splashes of colour stood out against the stone- hued sets, and they moved swiftly and gracefully on and off the stage, disappearing down the nearest ‘arcovolo’ exit without trailing away during the following scene, which so often happens in the Arena productions.  The soldiers shone in gold and porphry and Abigaille and Nabucco were refulgent in their sumptuous robes. Extras representing the king’s guards, were often deployed  harmoniously around the ‘gradinata’, exploiting the Roman tiered steps in a sweeping panorama.
A perfunctory performance by the conductor Julian Kovatchev. The break-neck pace at which he took the first finale, put  the stability between stage and orchestra at risk.  There was a moment when each went their own way. The chorus, so prominent and fundamental in this opera, sang with precision, but the conductor didn’t seem able to encourage  a level of dynamic contrast or colour from them which would have enriched the intensity of their performance.
A pity that the beautiful cello solos, notably in the solemn embroidery of Zaccaria’s prayer, can only be heard faintly across the great distance of the Arena. Carlo Colombara’s voice moves with ease over the entire range, and his  round sound and clean emission confers elegance and dignity to his role. When necessary, he has the vocal command  to arouse his followers to action. In the title role of Nabucco, Ambrogio Maestri gave a generous and energetic performance; sometimes too much so, and his vocal control suffered as a result. But he was consistently musical in his phrasing and colouring; and all this only 24 hours after his performance as Amonasro, ankle-deep in the Nile.  An energetic and generous performance by Tatiana Melnychenko, too. She threw herself physically and vocally into the formidable role of Abigaille as she prowled around the stage. War-like and determined she surmounted the fearsome technical challenges of the role, showing surprising buoancy in the coloratura.Stefano Secco was a gift as Ismaele, a role too often assigned to tenors with weak voices of dubious quality. As in previous occasions (his Romeo of Gounod in the Arena for instance), Secco demonstrated a solid technique, a firm, round, and expressive voice and tasteful musicianship. His presence was a touch of class. Anna Malavasi, brought a strong and affermative characterization to the role of Fenena. Francesco Palmieri as the High Priest of Baal, Luca Casalin as Abdallo and Maria Letizia Grosselli as Anna gave competent and well-balanced performances. Although noticeably smaller than the previous evening, the audience was particularly attentive and appreciative, and demonstrated it by their enthusiastic applause at the end. Photo Ennevi / Fondazione Arena