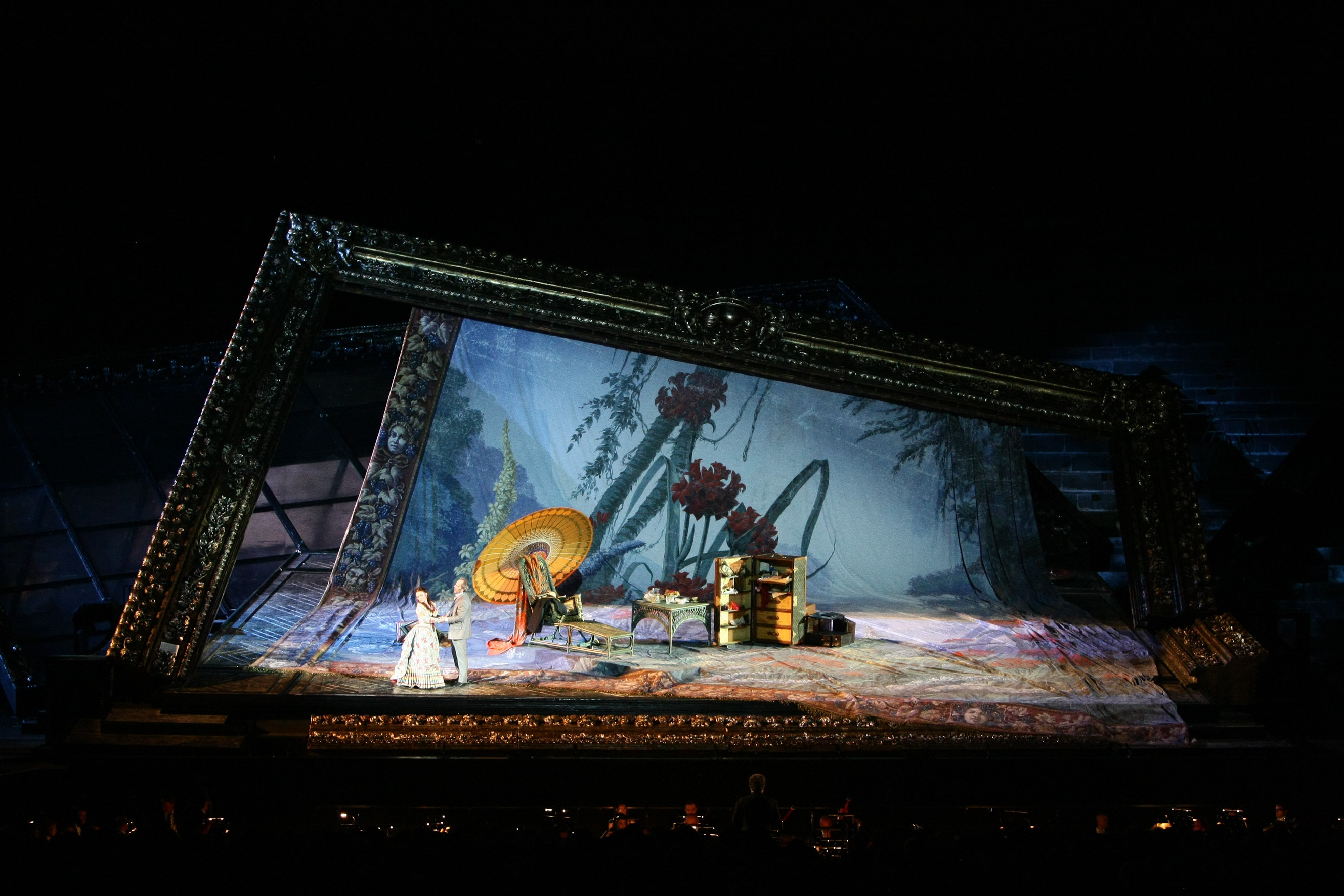 “La Traviata” at the Arena

A summer of centenaries in Verona.  The third opera of the Arena Festival’s Centenary Season, Verdi’s La Traviata, at its 100th performance in the Arena, premiered on Saturday, in a revival of the Hugo de Ana‘s 2011 production. De Ana’s work consistently relies on symbolic associations, and never more so than in this striking staging. Ransacked over-sized antique gilded picture frames, emptied and discarded, are strewn haphazardly over the raked stage and stone tiered steps. They remain the basic set throughout, exploiting and favouring the nature of the Arena’s spaces, form and atmosphere  rather than trying to reproduce improbable bedrooms, salons or country gardens.  The immense inclined central frame delimits the space in which the scenes are played out.
De Ana’s Traviata highlights the sense of emptiness, abandonment, decadence,and cynicism to be found in the story rather than allow the usual more romantic vision to dominate. He immediately takes the musical cue from the opening eight bars of the prelude which, identical to those of the opening of the third act where Violetta lies dying are an omen of the final “Addio del passato”…or “tutto finì.” As the prelude begins, men in top hats and frock coats resembling 19thcentury undertakers, slowly file around the stage bearing what looks like death notices, taking inventories; an ominous prefiguring of the end of the opera.  In the second act, instead, with nonchalance, de Ana creates the bucolic atmosphere of relaxed informality, by simply placing two large Japanese parasols, a trunk and a flowered drape in the frame as backdrop, which billowed gently in the breeze on the opening night.  His lighting, as always subtly reflects both the atmosphere and psychological state of the characters.
The beauty of the costumes, inspired by a Scomparini painting on the subject, are once again an affirmation of de Ana’s meticulous attention to detail. The colours in general are as austere and funereal as the scenery, except in the second act finale where the toreadors and dancers introduce garish tonalities of hot pink and canary yellow underlining a sense of vulgarity. The ballet itself was rather marginal, although it did add an effective grotesque comment to both the toreador scene and the baccanal in the last act.
While many of De Ana’s conceits are effective, some put the singers in an awkward situation.  Instead of Violetta being “libera” to focus on the vocal part at the end of “Sempre libera”, she’s busy trying to harness herself to the picture-frame before it lifts her into the air.  The corsetry she was left wearing at this point was also not very flattering.  Alfredo too, in his cabaletta in the second act,  “quest’onta laverò”, as he simultaneously tries to pack his suitcase while trying to don a waistcoat and jacket  unfortunately detracted focus from  the musical and vocal tension.  And Alfredo playing with a tennis raquet and hitting the ball into the drape, didn’t seem particularly apt during “De’ miei bollenti spiriti”, especially with an anxious audience following the trajectory of the ball as it rolled towards the pit.
A difficult opera to render orchestrally in the amphitheatre. So many intimate moments expressed by a thread of sound are imperceptible.  The young Veronese conductor, Andrea Battistoni,  opted for the impetuous, but notwithstanding his energetic gesture, there were still problems keeping the chorus and orchestra together. This could also have depended on the fact that the chorus was relegated to the extreme right and left down-stage wings, divided by the orchestra. However their singing, especially in ‘forte’ was overly exuberant and consequently their vocal control suffered. The off-stage orchestra in the first act was far too loud and actually drowned out the singers.  The playing was very heavy and the orchestra resembled a band more than an orchestra one would dance to.
Lana Kos as Violetta has a lovely lyric voice, but not such as to command the sort of presence needed in such a demanding role in the context of the Arena, nor to face the dramatic weight of the  powerful second act.  The coloratura in the first act was done by impetus rather than precision, and in the lyric moments there was a tendency to swoop into the note or rely on portamenti as a means of expression.  John Osborn as Alfredo sang with a clear focused tone. He interpreted the role with attention to dynamic contrast, diction and phrasing which gave his performance notable expressivity.  Roberto Frontali was a solid and authoritative Germont.  Sanja Anastasia gave an ebullient performance as Flora.  The singing of Teola Dvali, as Annina was unintelligible. The other parts, Carlo Bosi as Gastone, Nicolò Ceriani as the Baron, Paolo Orecchia as the Marchese, Gianluca Breda as the doctor, Antonio Feltracco as Giuseppe and Andrea Cortese as the servant/commissioner were all secure, precise and appropriate in their individual roles. A good-size audience, although not capacity, showed their appreciation with repeated curtain calls and enthusiastic applause. Photo Ennevi for Arena of Verona