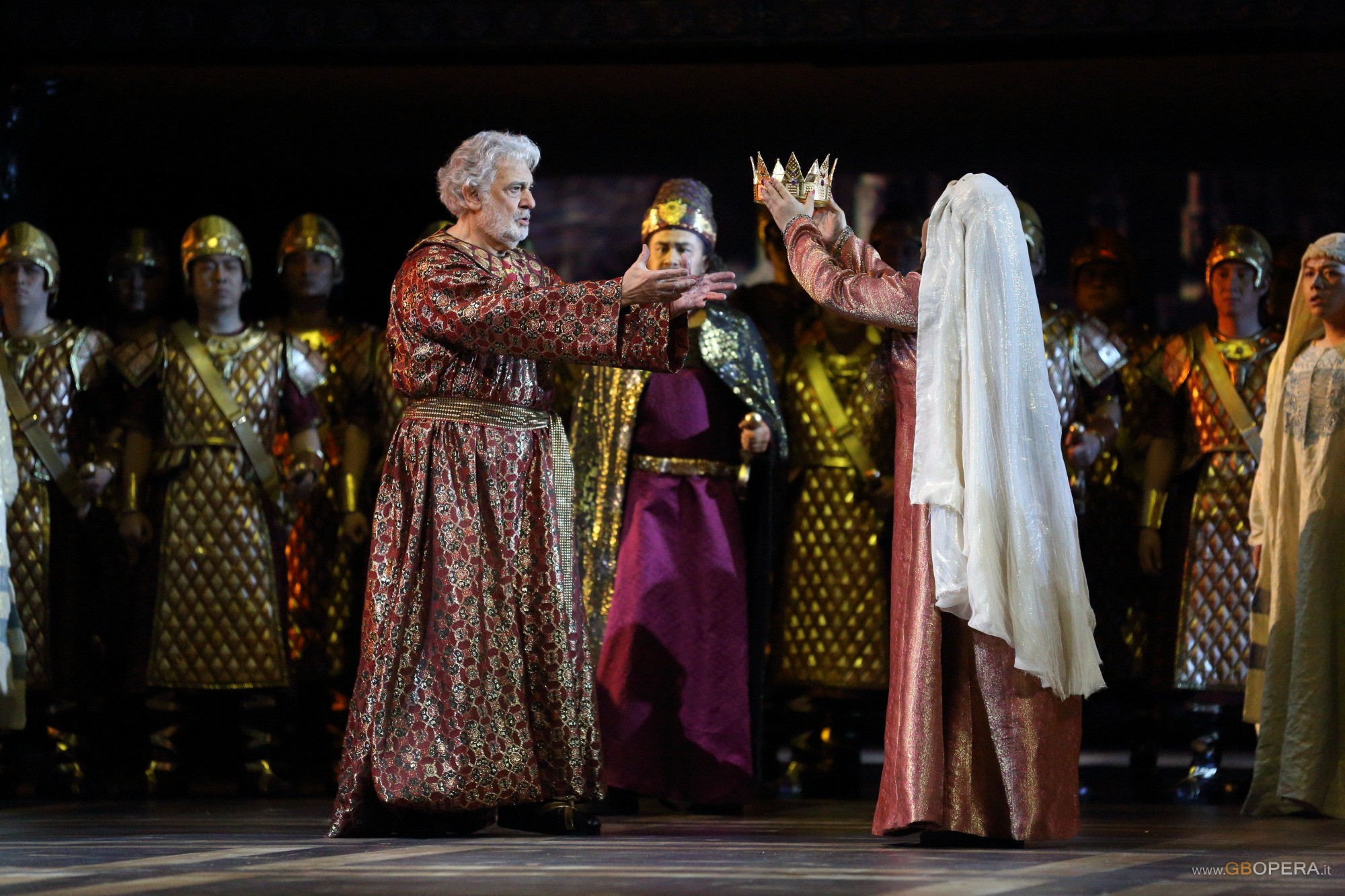 Verdi bicentenary celebrations are taking place in opera houses around the world this year, and Beijing is no exception. The high-point of the celebrations is the new production of Nabucco which premiered on May 22nd, ironically on Wagner’s birth-date, and Beijing managed to capture Domingo, opera’s most charismatic and beloved star, in the title role. This is his third appearance in a Nabucco production in the last five weeks, having recently sung it with great success at both the  ROH Covent Garden and the opening of the Mariinsky 2 at Saint Petersburg, with  further performances planned this summer at the Arena Festival in Verona. With consumate skill and artistry, Domingo has managed to pass from the tenor role of Ismaele 30 years ago, to the baritone role of  Nabucco today.  After such a lustrous  career as a tenor, Domingo, with the artistic intelligence that distinguishes him, is choosing roles not only more suitable to his vocality, but roles he can slip into comfortably, consonant with his age and experience, that also highlight his strengths.  The quality of his voice is still beautiful and shows no signs of wear. He moves easily in the entire baritone range, and the dark, burnished quality of his voice together with his expressivity and artfulness manage to compensate the need for a stronger and grittier baritone in this role. Intelligently, Domingo doesn’t try to alter the nature of his voice, but uses all his own specific qualities to their best advantage. At no time in the performance did he force his voice or enlarge it or try to make it sound fiercer.  He relied on diction, musical phrasing, vocal expressivity and of course, his exceptional stage-presence. The role of Nabucco is often overshadowed by the more spectacular vocal part of Abigaille. However,  in this performance a balance was struck through Domingo’s strong characterization of a king, who from the heights of power and presumption descends to the depths of despair, only to be reborn wiser and more humane.
Beautiful and imposing sets by Ezio Frigerio, sumptuous and elegant costumes by Franca Squarciapino, evocative lighting by Vinicio Cheli and breath-taking projection design by Sergio Metelli were a visual feast. The crumbling of the Temple and the conflagration scene were stunning. The Old Testament quotes that Verdi used as headings for his acts, were projected during the scene changes aiding continuity and collocating  the relevant episode. There was effective deployment of the masses by the director Gilbert Deflò in the double-tiered palace scenes and a striking tableau with the Hebrew slaves at the beginning of the chorus Va’ Pensiero. Nabucco’s entrance was a bit awkward, shuffling in, and enclosed as he was by shields. It didn’t reflect the triumphant, military march music in the orchestra.  The chorus, who moved with grace and poise,  demonstrated a beautiful and well amalgamated sound but clear diction and intention were lacking from the words which deprived the text of its inherent drama. The very fine orchestra played with precision, but the conductor Eugene Kohn did not seem to be able to elicit strong dynamic contrasts or musical tension, which sapped a lot of excitement from the production.  Now and then there were also problems of  syncronization both within the ensemble and between stage and orchestra.
The cast alongside Domingo on the opening night was completely Chinese. Sun Xiuwei as Abigaille, was not in a role most suited to her vocality.  Beautiful in the lirical, she lacked weight in the lower notes and didn’t show the vocal aggressiveness needed to portray this formidable role.  On the other hand, the beautiful, rich and full voice, of Yang Guang, seamless throughout the entire range, was even too much for the role of Fenena.  Liang Li gave a powerful and convincing performance as Zaccaria combining a commanding vocal and stage presence, easy extension, incisive diction and a beautiful and flexible timbre.  Jin Zhengjian was a fervent Ismaele, although vocally light and tense.  Zhao Ming as the High Priest of Baal, Liu Naiqui as Abdallo and Zhang Jing as Anna  all gave accurate and competent performances on both evenings.  In the alternating European cast of the second night, the Italian tenor, Luciano Ganci, as Ismaele stood out, thanks to his fine, even lyric quality and elegant phrasing.  Anna Pirozzi was resolute as Abigaille and notable for her sustained, spun pianissimi.  Vladimir Stoyanov, as Nabucco, vocally gave  biting edge to the role, but had a rather withdrawn stage-presence. Kristinn Sigmundsson  as Zaccaria, at the start showed a captivating quality in his middle register but later displayed difficulty both in his upper and lower ones. Both performances were enthusiastically received by the public, but the first night, with Domingo, was, as to be expected, a triumph.