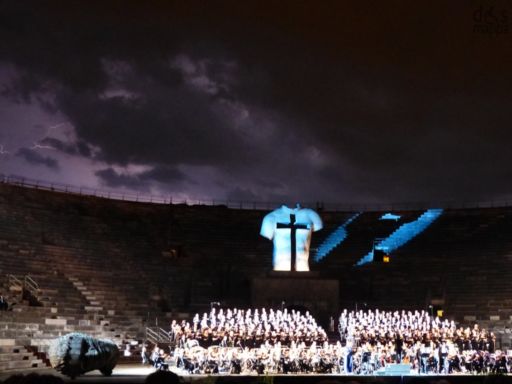 Sometimes, everything that can go wrong, does. Last night’s performance of the much heralded performance of the Verdi Requiem at the Arena with Myung-Whun Chung conducting the combined orchestras and choruses of  the two famous opera companies of the Veneto region, the Arena di Verona and the La Fenice theatre, was ill-fated even before the concert began.  Fate decided that the full powerful force of nature would rule the evening, and it did, with strong gusts of wind and continuous rumbling of thunder and streaks of lightning providing a dramatic sound and light show from beginning to end.  Scheduled to begin at 22.00, the gates were opened very late(due to a  last minute rehearsal together with some bad weather?) and protesting spectators in the gods were still pouring in when the performance got under way at 22.10.  We saw, rather than heard it get under way, as the thunder covered the pianissimo beginning from the lower strings.  And just as the Requiem began,  3 of a group of 5 cypress trees in the cemetery-like set, were knocked over by strong gusts of wind and rolled down the stone steps.  The trees placed in the empty orchestral pit were likewise flattened and the sound of abandoned cans rolling around the steps destroyed many a musical moment.  As if the inclement weather conditions weren’t enough, a loud-speaker from outside the Arena formed a noisy fair-ground background throughout, and, dodging lightning bolts, a plane with flashing lights, roared overhead in the Libera me!  Unfortunately the evocative effects of the lighting design, by Paolo Mazzon, were over-shadowed by those in the sky.  In these conditions, a musically satisfying performance was out of the question.
Of the four soloists, only the tenor and the mezzo-soprano managed to be incisive and musically precise.  Fabio Sartori gave a strong performance. He was secure and firm, with attention to phrasing, colour and dynamics and elegantly expressive, particularly in the Ingemisco.  Daniela Barcellona seemed the most at ease, and her rich, full and focused voice passed smoothly through the entire range, capable of expressively modulating and phrasing the vocal line.  The bass, Vitalij Kowaljow, was musically correct but vocally unconvincing. He lacks the weighty and sonorous lower notes that give the required presence and solemnity to his part, and his muffled diction and generic colouring deprived his part of its force and significance.  The soprano, Hui He, was clearly in great difficulty from the outset, indiscriminately anticipating her cues, hurrying through phrases, cutting short note values, with no musical precision, creating quite a few difficulties for the conductor and other soloists. Her breath was unsupported and she tended to pump each note. She could not sustain the splendid lyrical lines of the work which was especially noticeable in of the exquisite final ‘a cappella’, Requiem, together with the chorus, where the ethereal top C at the end was unattainable.
In these circumstances, and under the threat of an imminent thunder storm, there wasn’t a lot that the conductor Myung Whun Chung could do. Intelligently, he sent the work along at a fluid pace,  without attempting the nuances that were prohibitive in this situation. Cool, calm and collected, his elegant and musical firmness was the saving grace of the performance. He endowed the performance with both graciousness and energy and he grasped the opportunities that were still under his control, to elicit a more artistically meaningful reading where possible. This was evident in some beautifully expressive singing he managed to draw out of a not particularly refined chorus.
Rather absurd, the deference exhibited between the two orchestras, especially in a piece that only lasts an hour and twenty minutes. Before the Offertory, all the first desks switched over, turning the performance into a sort of musical chairs.  Problematic, too, from the artistic point of view, is the fact that while the double chorus and orchestra is visually stunning and acustically impressive, the soloists remain single and disadvantaged in respect to them. The end of the Requiem coincided with the first drops of rain, and amidst the mixture of applause and whistling(booing in Italy), the far from capacity audience fled towards the exits. Requiescat in pace. Amen.
Foto Ennevi per Fondazione Arena