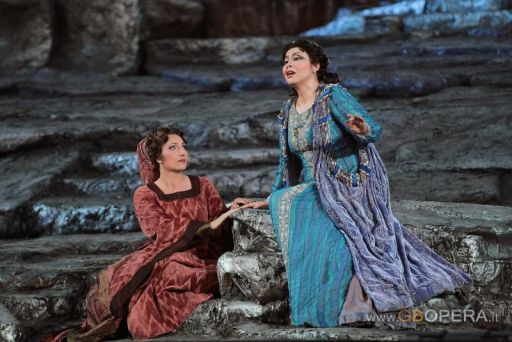 Il Trovatore by Verdi is the fourth opera to premier this season at the Arena di Verona, in a revival of the Zeffirelli 2001 production, with monumental sets by Zeffirelli and costumes by Raemonda Gaetani. The first night cast was formed by Artur Rucinski as the Count of Luna, Hui He as Leonora, Anna Smirnova as Azucena, Carlo Ventre as Manrico and Roberto Tagliavini as Ferrando.
The Spain of Zeffirelli’s set is harsh and hard, emphasized by the slabs of black shale that make up the uneven surface of the raked stage which forms a rocky hill.  Aligned along the hill crest are three towers constructed out of shields, armour and weapons each adorned with metal ensigns. This remains the basic set for the entire opera.  Mobile wings, for fast silent scene changes,  made of an assemblage of arms, pikes, helmets and lancers, slide on and off the stage to create the military encampment scenes, just as the gypsy camp is instantaneously set up by gypsies bearing  Missoni style weaves attached to poles.  In the second act the middle tower opens up like a gold-encrusted icon, to form a cathedral; the same tower which opens up to form a dungeon in the last act. Thanks to these expedients, the strong dramatic thrust of this opera is never interrupted or weakened allowing for a tight dramatic performance of the lavish sequence of exceptional arias and ensembles and stirring choruses.  The opera flows from one scene to the next and there is only one interval, after the second act.  Flagging both sides of down-stage, are two groups of giant-sized, armoured knights, one poised to kill the other, an allegory for the two unbeknown brothers, rivals in love and loyalties.  The black and iron tonalities of the set give a grisaille effect, and second both the gloom and lugubriousness as well as the nocturnal atmosphere of the story.   The alternation of blood red or cool blue lighting and projections of flames across the gradinate highlight theatrical effects inherent in the score, expanding them to Arena size proportions.  The costumes of the soloists and men-at-arms are particularly elegant and refined, with glittering  rich, dark colours and sumptuous fabrics.  Exceptionally convincing the sword play in the fight scenes created by Renzo Musumeci Greco.  Only the slow motion, balletic, chorus line routine with sword, during the chorus at the beginning of the third act, “Squilli, echeggi la tromba guerriera”, seemed more suitable to the Mel Brooks film The Producers.  And the fact that Azucena dies by Harakiri at the very end, seems an incredible and unnecessary liberty.  The reinserted ballet from the French version of the opera, after the soldiers’ chorus at the beginning of act three, is danced by the gypsies for the delectation of the soldiers and, one supposes, the Arena audience.  Unfortunately this music changes musical gear, the action is held up, and the accompanying castanets from an unidentifiable source, were obnoxiously loud and annoying on the opening night.
The men’s chorus gave an excellent vocal characterization with clear and clean diction, propulsive musical accents, and an heroic and stirring ringing vocal quality  which also resulted as compact and homogeneous, strong and vibrant.  Their best performance so far this season.  Unfortunately, during the evening,  the orchestra under Giuliano Carella, was often out of step rhythmically with the chorus, getting off to a shaky start with the soprano too, as they chased her very elastic rhythm in “Tacea la notte placida”.
The soprano, Hui He, as Leonora, was not at ease in her first aria, which was strained and uneven. She appeared to be struggling both in the dramatic and coloratura and showed signs of fatigue throughout the evening , only to find new strength right at the end , and give a shining performance in the duet with the Count, first in “Mira di acerbe lagrime”, but above all in “Vivrà, contende il giubilo”, where the coloratura was finally precise and fluid.  Carlo Ventre‘s vocality was secure and solid,  devoid of any melodramatic concessions.  A voice which communicates the vigour and energy of Manrico rather than his sensual longing for Leonora.   Artur Rucinski was a more noble than treacherous Count.  An interesting and beautiful timbre together with masterful breath control, clean vocal emission and elegant and expressive phrasing were especially evident in “Il balen del suo sorriso” which was rewarded by an ovation from the audience.  In her opening scene, Azucena (Anna Smirnova) showed a portentous amount of sound but the voice wavered to such a degree that the vocal line seemed trilled.  As the evening progressed the voice became firmer and went from strength to strength, the top of the range  emerging as particularly free and ringing.  The volume was sustained at forte throughout, one supposes, in order to communicate the passionate and dramatic intensity of Azucena’s part as strongly as possible across the enormous distance that separated her from the audience.  In the sub-ordinate but important role, especially  at the opening of the opera, the well-modulated and rounded timbre of Roberto Tagliavini‘s Ferrando,  was a  strong and effective vocal and theatrical presence.  Elena Borin was a vocally awkward Ines.  Paolo Antognetti, Victor Garcia Sierra and Cristiano Olivieri, respectively, Ruiz, an old gypsy, and a messenger, were all convincing, secure and appropriate in their roles. Thanks to the quick scene changes, and the single interval, the opera was out before twelve-thirty: the earliest so far of all the productions, and a god send, given that a few drops of rain started to fall just as we left. The non-capacity audience, (the numbered gradinata  deserted, but the stalls well occupied), were generous with their applause. Photo Ennevi for Fondazione Arena of Verona