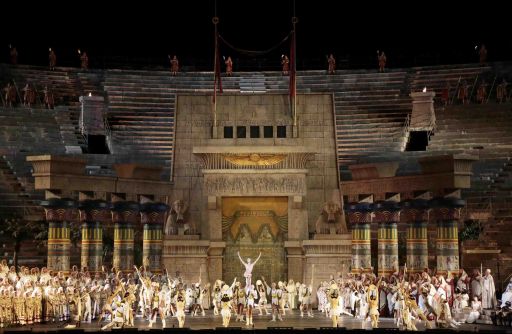 10th  August 1913 the world-famous Veronese tenor, Giovanni Zenatello  decided to mount a monumental production of Aida in the Roman amphitheatre of his home town to celebrate the centenary anniversary of Giuseppe Verdi’s birth.  He was aided in his project by the renowned Veronese architect, Ettore Fagiuoli, who designed the monumental and decorative sets in line with the art deco taste then in vogue. A happy intuition, as the Arena celebrates 100 years of its summer opera festivals (suspended only in the war years) and the name, Arena has become synonymous with Aida…and this Aida in particular. The revival, based on the original 1913 sets, directed by Gianfranco de Bosio, has been a constant in the Arena seasons for the last 30 years, since 1982,alternating from time to time with new productions by world renowned designers and directors. But in the end, this is the production which has become a cult. The marriage between such a prestigious, archeological venue with its sandstone hues, and the historical and stylized sets linked philologically through Fagiuoli to Verdi’s Mariette, evokes the atmosphere of an imaginary ancient Egypt  in the public’s mind, as much today as in the past.  Add  the torrid Veronese summer heat under a star-studded vault, and the first sign of a cool evening breeze coinciding with the third act Nile scene and the opera becomes a total experience.
With this in mind, it was an obligated choice for the Arena to stage this version, and have the opening night coincide with the date of the original, complete with a celebratory speech in Italian, English and German, by Verona’s lord mayor and the pageant of the investiture of Radames (Marco Berti) with the  presentation of the sword used by Zenatello  in the first performance. The musical direction was entrusted to the conductor, Daniel Oren, a veteran of the Arena. His strong, and at times unorthodox, musical personality ensured an intense and exciting performance, practically devoid of his usual disturbing histrionics which, in this occasion, he tempered, gaining in authoritativeness. His one clamorous self-indulgence remains the theatrical last note of the second act complete with crescendo, held beyond the limits of any musical credibility. The audience loves it, and his jump for the cut-off!  On the other hand, he managed to elicit truly atmospheric and extremely pianissimo singing from the unaccompanied male chorus of priests at the end of the first act.  But even his energy and intensity, can’t tidy up a vocally ragged chorus, although he did lunge at a bass who’s voice suddenly stuck out from the group.  Nor can he get the off-stage female chorus, at the end of the first act, to avoid being consistently flat.  For the rest, he led a tight, expressive and  propulsive performance, with the musical reins firmly in his hands. As in the previous evening’s Rigoletto, a doubt remains regarding the orchestra. Although its true that certain acoustical  imbalances, customary in open-air performances, were not evident, it is also true that the orchestral sound resulted uniform, and that of the individual instruments was incongruous for dynamics and collocation.  It seems that sound management is being experimented and is sacrificing the authentic but imperfect, for the homogenized.
As for the cast, Marco Berti and Ambrogio Maestri were in particularly fine form.  A commanding and secure Radamès, Berti’s perfect diction was supported by a firm and full voice from top to bottom, consistent until the end. Maestri gave a full-rounded performance as Amonasro, convincing  both vocally and dramatically. Threatening and bellicose,  or rallying his people, in Act II,  proud, uncompromising and insinuating in Act III, his imposing stature and energy lent ulterior weight to a vocal line, which alone, through a masterful use of colour, dynamic and textural contrast, fully outlined the characterization.  After a rather pale first act, Fiorenza Cedolins’s Aida went from strength to strength.  Her interpretation of the role was convincing and consistent, and not only while singing. A gifted actress, her simple, body-language reactions maintained her centrality to the action and often contributed to the general dramatic continuity. She displayed a profound and mature interpretative, musical  study of her role, and can rely on a solid and reliable vocal technique, especially strong in her middle register, to express it.  She used it to greatest advantage in the lyrical phrases, lacking the power and weight, however, for the more dramatic moments. This was especially noticeable in the full ensembles where her vocal line was imperceptible.  Violeta Urmana  was a convincing Amneris, suitably regal and vocally secure. Her warm colour and full and focussed sound, even and smooth in the entire range, would have earned greater prominence, however, had she concentrated on a more incisive diction.
Orlin Anastassov gave a committed performance as an authoritative and warmongering high-priest, although his vocal aggressiveness sometimes bordered on the rough. Carlo Cigni as the king, gave a performance which did not rise above the ordinary. Special mentions for Antonella Trevisan as the high-priestess and Saverio Fiore as a messenger. The former gave a strong, clear, unwavering and in-tune rendition of the orientalizing solo vocal line of the priestess, striking for its cleanness and simplicity, a rarity in Arena performances.  The latter, in the walk on role of the messenger, vocally precise and expressive, managed to convey urgency, awe and terror in the space of a few bars.  In the second act ballet, Myrna Kamara still maintains her charisma and style intact, in the cameo role with which she has become identified. The other solo dancers, Agache, Kurtsev and Russo contributed with panache to the spectacular effects created by the choreographer Susanna Egri for the corps de ballet.  Noteworthy are de Bosio’s effective and striking use of extras,and the fluid, sinuous and quick exits of the chorus down the various tunnels of the amphitheatre, at the end of their scenes. The performance played to an attentive, enthusiastic and festive capacity audience, demonstrating, if needs be, the emblematic value that this production holds for the Arena audience. Photo Ennevi for Arena