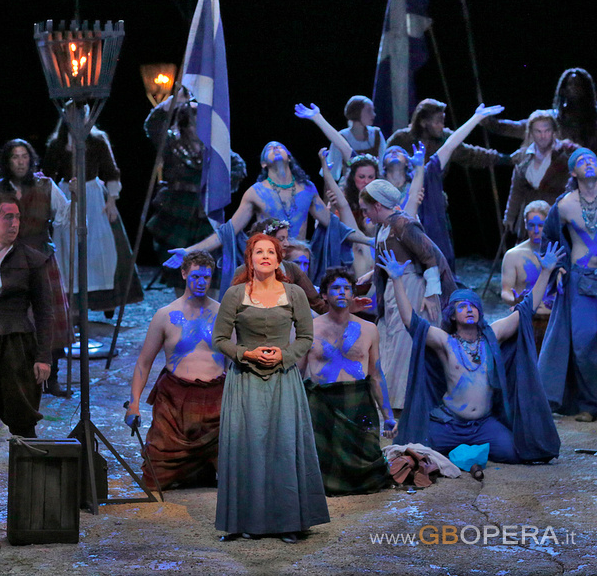 The recent international revival of Rossini’s La Donna del Lago — focused on the American mezzo-soprano Joyce DiDonato — reached the United States at last with the opera’s Santa Fe premiere, in a co-production with the Metropolitan Opera that will reach that stage in February 2015, with DiDonato once again portraying the Highland beauty. Her performance certainly justifies the renewed interest in this work, an exceptionally rewarding score on its own merits. Indeed, beyond the need for not one but two brilliant Rossini mezzos and not one but two brilliant Rossini tenors, it’s difficult to understand why La Donna del Lago ever fell into neglect.
Unlike many of the stage directors of recent European productions, Paul Curran tells the story straight, using the simplest possible means, and he keeps the stage lively: we never doubt that the characters find these conflicts urgent and meaningful, no matter how obscure ancient Scottish politics may be to us. Curran is at his best in the smallest detail: the contrast between Giacomo and Malcolm is symbolized by the gifts they present to Elena, a ring from the king (as prescribed in the libretto) and a bouquet of heather from the Highland warrior.
Most of the action takes place on a raked, craggy heath that extends to the open sky beyond. The dramatic sky and mountainous desert landscape of Santa Fe provide scenic beauty that no designers can match, and while there’s no real lake in the distance, it’s easy to imagine that we are in a wild, mystical place like the one that Scott, Tottola, and Rossini describe. On most evenings, DiDonato sang her entrance aria, “O mattutini albori,” with the setting sun and blazing clouds behind her. It’s the kind of pictorial effect the Met won’t be able to reproduce indoors. Presumably, the New York company will expand the playing area for its larger stage; in Santa Fe, a few scenes were uncomfortably crowded with Scotsmen rushing on and off.
As Malcolm, Sicilian mezzo-soprano Marianna Pizzolato looked nothing like a man — and I mean that as a compliment — but she sang with heroic fervor in her company debut. It’s a warm, slightly smoky voice with great character and strength; the Santa Fe audience responded to her enthusiastically.
Tenor René Barbera, from neighboring Texas, delivered a vibrant Rodrigo, with a gleaming edge to his voice that sliced through ensembles and made the character seem all the more dangerous.
In another company debut, tenor Lawrence Brownlee, from Ohio, partnered beautifully with DiDonato, a frequent collaborator, lending their scenes additional dramatic interest. While his singing on this occasion didn’t possess the bloom I’m accustomed to hearing from him, his tone — like piping hot melted butter — is always appealing, and his agility is a marvel.  But the show belonged to DiDonato, looking radiant in Shuler’s simple costumes and singing her heart out. Even for this listener, who has followed her for years, the variety of vocal colors, the uncanny mastery of rhythm, the clarity of diction and the musical accuracy — even in the most ornate passagework — were simply astonishing.
This was hardly a carbon copy of the interpretation heard in Europe: for example, she and conductor Stephen Lord lingered over the phrase “Tanti affetti,” as if Elena were searching for the right word: “Tanti … affetti.” That’s just one measure of this singer’s ability to imbue bel canto with an unparalleled richness of feeling. At this point, we’d do everybody a favor if we simply faced up to reality and renamed this opera, once and for all: “La DiDonato del Lago”. Phpto Ken Howard