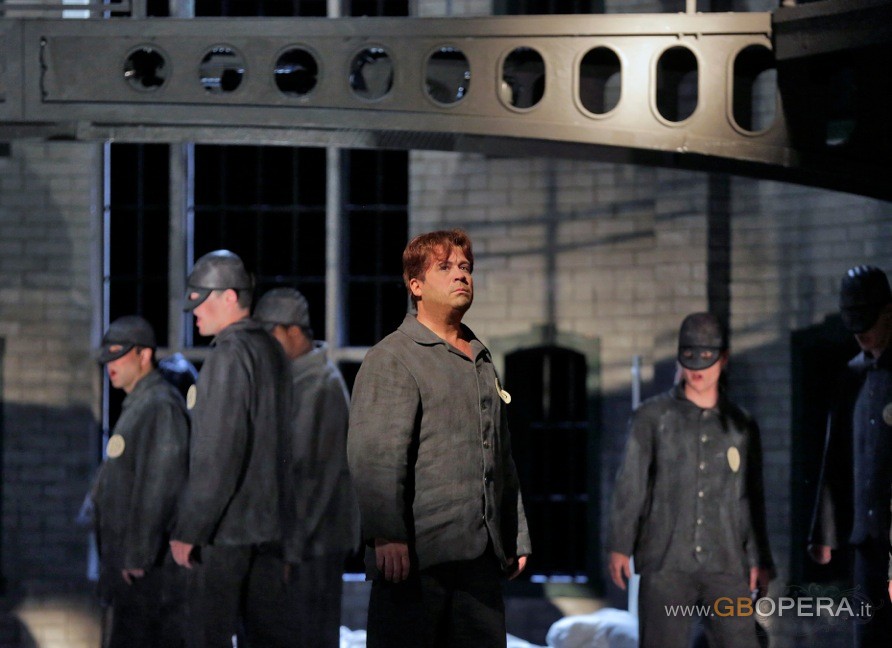 The final of five productions to open in this year’s Santa Fe Opera Festival was Theodore Morrison’s Oscar, the first work by this 75-year-old composer to see the stage. The Opera Company of Philadelphia, a co-producer of Oscar, is scheduled to present the piece in 2015. I do not predict that audiences will have many other opportunities to see it.
Unfortunately, Morrison’s inexperience shows, particularly in his libretto, co-written with John Cox. Determined to make of the Irish playwright Oscar Wilde not merely a martyr but also a tragic hero — and, indeed, nothing less than a saint — Morrison and Cox defy the historical record and the audience’s patience, as well. By the time they reach their finale, in which Wilde is welcomed into Immortality by a chorus of white-gowned, golden-haired worthies, I had to hold my nose to keep from laughing — which cannot be the response the creators sought.
At a time when everyone from Putin to the Pope to the President of the United States keeps the fight for gay rights in the headlines, Oscar is surely relevant, and the opera’s star, countertenor David Daniels, has added to that by announcing, shortly after the premiere, his engagement to his longtime partner, conductor Scott Walters. But this in effect makes Daniels a better role model than Wilde, a married father of two who denied his homosexuality and never pursued the “mission” that Morrison’s protagonist proclaims toward the end of this opera. In any case, the all-too-human Wilde teeters uncomfortably on the pedestal where Morrison and Cox have hoisted him.
Wilde is the only countertenor in Morrison’s score, to signal his otherness. In the title role, Daniels sings with strength and nuance, if not quite all the tonal brilliance that made this artist so distinctive earlier in his career. As an actor, he excels in the many sequences in which Wilde merely listens to others, as he does in an extended scene in Act II, when two other prisoners share their stories with him.
Wilde is onstage almost constantly, and in an admirably committed performance, Daniels even dances, in ballet sequences with the spirit of his young lover, Lord Alfred “Bosie” Douglas. Since the historical Bosie fled Britain to safety during Wilde’s trial and imprisonment, dancer Reed Luplau, as choreographed by Seán Curran, portrays him in various guises; much of the time, the character functions rather uncomfortably like that of Tadzio in Britten’s Death in Venice.
If Daniels does not deliver Wilde’s most celebrated quality, his wit, it’s because the libretto affords him none. Somehow, Morrison and Cox have written an opera about Oscar Wilde that contains only one epigram — despite liberal quotation from their sources. Indeed, the entire opera seems to misunderstand what Wilde meant in the title of his most famous play, The Importance of Being Earnest: here, everything is much, much too earnest. Act II shows Wilde in Reading Gaol, learning compassion (and saintliness). In the process, Wilde becomes less and less a character, more and more an icon.
Far stronger is Act I, set mostly in the children’s nursery of the home of the writer Ada Leverson (soprano Heidi Stober). A realistic, almost mundane scene in which she and the writer Frank Harris (tenor William Burden) counsel Wilde is contrasted with the following scene, in which the nursery toys enact Wilde’s trial on charges of “gross indecency.” The judge (bass-baritone Kevin Burdette) becomes a jack-in-the-box, and the children’s crib becomes the witness stand. This scene is the highlight of the opera as a whole: the satire here is sharp, the staging by Kevin Newbury flavorful, and the debt to Brecht is clear. But all those excellent qualities fall away as soon as Act II begins.
In Oscar, the ghost of Walt Whitman acts as narrator, more kindly but otherwise much like Che Guevara in Lloyd-Webber’s Evita. At least in this case our narrator is known to have met our protagonist, but this Whitman delivers the kinds of factual background information better left to program notes, and even the capable Dwayne Croft can do nothing to enliven him. Why Whitman is here at all, and why he, who was just as “other” as Wilde, is portrayed by a baritone and not by another countertenor, one can only guess.
Evan Rogister conducted with grace and evident respect for Morrison’s musical ambitions, delivering a coherent reading of a score that too often introduces themes without developing them. In the always tonal, always emotionally appropriate music, one hears the influence of composers as diverse as Bach and Stravinsky, and Morrison’s orchestrations do much to sustain a listener’s interest even in the dramatically lifeless Act II. What one does not hear is an indication why anybody — much less one of the most prestigious venues in the United States — bothered to produce this well-intended but misguided opera at all. Without human weaknesses and without wit, this Oscar is something the real Wilde never, ever was: dull. Ph. Ken Howard